Mennonite Brethren Missions/Services International (MBMSI) over its 125-year history has developed through numerous designations and roles within the United States and Canadian Conferences of Mennonite Brethren (MB) Churches. Initially it was simply the "Committee for Gentile Missions" (1885), then the "Committee for Foreign Missions" (1896). The missional identity of the entire conference was evident when its first legal charter was named "The American Mennonite Brethren Mission Union" in 1900. In 1909, that constitution was revised to become the Conference of the Mennonite Brethren Church of North America, within which was the "Directorate of Foreign Missions." In 1936 the same became the "Board of Foreign Missions." In the same year the Board of General Welfare and Public Relations was created to oversee matters relating to relief, peace, and colonization. The Board of Foreign Missions dropped the designation "Foreign" in 1960, and in 1966 the Board of Missions and Services resulted from the merger of the Boards of Missions and General Welfare. The current name was adopted in 1998. Popularly this mission agency of the United States and Canadian MB Church conferences has been known as BOMAS, MBM/S, MBMSI and most recently as MB Mission.

The Krimmer MB Church (KMB), a separate conference which merged with the General Conference of MB Churches in 1960, had its own Foreign Missions Committee which in 1901 was chartered as the Missionary Board of the KMB. Upon the aforementioned merger, this committee ceased operations and the missionaries and fields came under the administration of the MB Board of Missions.

MBMSI was under the single governance of the General Conference of the Mennonite Brethren Churches of North America until divestiture of the same in 2004. From 2005 on it was a bi-national agency under the governance of the MBMSI Board, composed of equal representation from the US and Canadian Conferences of MB Churches. MBMSI is a not-for-profit corporation registered in California, USA (2000) and in British Colombia, Canada (2010).

The MB Church was born in mission. Since its formation in the Ukraine in 1860, it has been motivated by the Great Commission of Jesus recorded in Matthew 28 to make disciples of all people groups. The passion of MBMSI has been to respond to people’s needs, to preach the Good News, to see people baptized and to facilitate the formation of vibrant, multiplying churches and conferences.

These services have been carried out through the following programs: 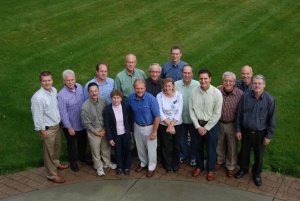 In its lengthy and fruitful history, the many ministries of MBMSI have been serviced by missionaries, volunteers, executives, and statesmen too numerous to mention. Among those most influential in the overall direction of the entire program are the following, along with their terms of service:

Early missionary reports and publicity for MBMSI were frequent items in the German periodicals Die Mennonitische Rundschau (1880-2007), Zionsbote (1884-1964) and the KMB Der Wahrheitsfreund (1915-1947). Around mid-century as English became more prominent the periodicals Christian Leader (1936-present), the KMB Christian Witness (1941-1960), and the Mennonite Observer/Mennonite Brethren Herald (1955-present) hosted much of MBMSI publicity. Increasingly in the second half of the century MBMSI took initiatives to publish bulletin inserts, missionary albums, prayer directories, brochures, maps and calendars. In 1985 a regular newsletter, Mennonite Brethren in World Mission, went directly to interested readers and supporters. In 1987 this newsletter developed into a bi-monthly mission’s magazine called Witness which is currently sent to every MB home.

Numerous book-length publications have also been sponsored by MBMSI. These are cited in this article’s bibliography.

Audio-visual communication has also been a frequently used tool of information for MBMSI. In addition to the much-utilized slide and tape presentations of earlier decades, more recently MBMSI has invested in films, shorter video-clips and online communications. Noteworthy is the film about mission to the Wounaan people entitled "People of the River" (1980). In 1995 MBMSI created its first website (www.mbmsi.org) later followed by a special photo site (www.mbmsiphoto.com) and another site housing numerous stories in video (www.mbmsivideo.org).

MBMSI played a foundational role in the development of the International Community of MB Churches (ICOMB) by sponsoring the first ever MB Global Consultation in mission in Brazil in 1988. ICOMB formed in 1990 and since this fledgling entity had no staff (or budget,) Harold Ens and MBMSI Staff were crucial in assisting the development (funding) and planning procedures of ICOMB. Today it is the vehicle whereby MB Church Conferences of the world express their partnership in mission and ministry and Randy Friesen sits on the Executive Committee representing MBMSI.

Over the last seven years MBMSI has been in a season of change and growth. The following is a highlight of a few of the transitions that have taken place: new international office in Abbotsford, new leadership team structure including a new General Director, new relational governance model, full implementation of the relational funding model and new incorporation in Canada, alongside a parallel incorporation in the USA.

MBMSI values dependency on Jesus, risk-taking obedience and holistic church planting that transforms community amongst the least reached. They are centered in Anabaptist theology and motivated by Jesus’ commission to make disciples of all nations.

Klassen, A. J., ed. The Church in Mission. Fresno, CA: Mennonite Brethren Board of Christian Literature, 1967.