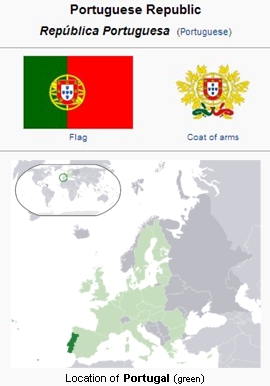 The Portuguese Republic is located in South-Western Europe, on the Iberian Peninsula, and it is the westernmost country of mainland Europe, being bordered by the Atlantic Ocean to the west and south and by Spain to the north and east. The total area of the country is 92,212 km2 (35,603 square miles) and in 2012 Portugal had an estimated population of 10,487,289.

Portugal established itself as an independent kingdom in 1139. In the 15th and 16th centuries, Portuguese sailors helped establish the first global empire and the country became one of the world's major economic, political and military powers. In the 20th century Portugal experienced political and economic turmoil along with the decolonization of its overseas territories.

Portugal is a very homogenous country in terms of ethnicity and religion. In 2011, the religious affiliation of the Portuguese population was as follows: Roman Catholic, 81%; Other Christian, 3.3%; Other Religions, 0.6%; No Religion, 6.8%; and Undeclared, 8.3%.

Mennonite presence in Portugal began spontaneously when a young Mozambican student in Lisbon, Miguel Anelo Jardim, happened upon David Augsburger's book, Free to Forgive. This book gripped Jardim to the point that he sought more information about Mennonites. He began corresponding with the London Mennonite Centre and Mennonites in Brazil. Jardim visited the Mennonites in Brazil and was baptized by Theo Penner in 1985.

Back in Portugal, Jardim began gathering a small group of like-minded people and this became the core of the new Mennonite church. The first official worship service was held on 31 August 1986, and a short time later the first three people were baptized.

There were over a million refugees in Portugal (1986) from former Portuguese colonies in Africa. In November 1985 Greet Lodder from The Netherlands (sponsored by Mennonite Central Committee and the International Mennonite Organization [IMO]) began working with African refugees at Amadora near Lisbon. Her work received spiritual assistance from the new Mennonite church. In July 1986 IMO and MCC began making plans to expand the project at Amadora to include small agricultural developments for the refugees. A West German television program telling the story of the church and the refugee work of Greet Lodder aired 4 April 1987.

The Mennonite Brethren decided in January 1986 to begin church planting in Loures, a suburb of Lisbon. The Mennonite Board of Missions (Mennonite Church), in the spring of 1987, investigated the possibility of mission work in the country. Efforts by IMO to coordinate the work of various conferences and agencies began in 1986.

Between 2000 and 2020 the following Anabaptist group was active in Portugal: