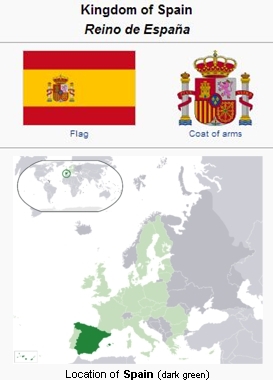 Before 1976 the sporadic presence of Spanish Mennonite Christians was due to contacts by emigrated Spaniards with Mennonite congregations in Switzerland, France, Belgium, and Germany. Once these few Christians returned to Spain, they either associated with the existing Protestant congregations, especially Baptists and Plymouth Brethren, or they remained anonymous.

There also were some groups who identified in a general way with the Anabaptist testimony. This was the case of the congregations in Fuenlabrada and in Vallecas, Madrid. In general terms, after ten years of Mennonite testimony in Spain a combined membership of 120 persons could be estimated.

The first documented activity of Mennonites in Spain occurred during the Spanish Civil War (1936-1939) when Mennonite Relief Committee sent several volunteers from the United States to participate in a program to feed child war refugees. The victory by the fascists' faction of National-Catholic ideology effectively terminated Mennonite involvement in Spain at the end of the war.

During the 1970s, it became possible to send missionaries to Spain. After consulting with leaders of the Spanish Protestant churches, Mennonite missionaries decided to cooperate with them instead of establishing yet another denomination in the country. The first missionaries, John and Bonnie Driver, were well received for the freshness of their biblical message with Anabaptist emphases that many young Evangelicals found especially exciting. The Drivers remained in Spain for 10-15 years before returning to South America.

Meanwhile, the first Mennonite Church had come into being in Barcelona. The group that initiated it arrived from Brussels, Belgium, where they had migrated years before and where they had been worshiping with a Mennonite congregation at an American mission. José Luis Suárez gave leadership to this group and was their pastor for many years until his retirement.

Also during the 1970s there was an interesting development occurred in Burgos. A movement of conversions took place among teenagers within the Catholic Church. With a strong component of music and the arts, plus communal life in shared households, this movement shook the whole city. John Driver was among the many people they invited to speak in Burgos, and his approach to the teaching of Jesus caught the imagination of these young Christians. When three “elders” of the movement made a trip to the United States to visit radical Christian communities, they met Dionisio and Connie Byler of Argentina. They invited the Bylers to come to Burgos to continue the teaching ministry they had received from Driver. The Bylers remained in Burgos after 1981 with the support of Mennonite Mission Network. In the mid-1990s, the group that started out as Catholic adopted a Mennonite identity.

North American Brethren in Christ (BIC) missionaries Bruce and Merly Bundy arrived in Madrid in the 1990s, inaugurating another era of Anabaptist influence in the country. Through their efforts and the efforts of others, the BIC in 2016 had two churches in the Madrid area. Juan and Lucy Ferreira from Venezuela began a BIC work in Tenerife, in the Canary Islands, which related to the BIC churches of Madrid.

Another effort developed early in the 21st century when Organización Cristiana Amor Viviente, a Mennonite World Conference member church in Honduras, sent Antonio and Irma Montes to Spain to lead a mission effort. The fruits of their work included two churches in Catalonia and a small group in Madrid.

Since the 1980s these different groups in Spain--widely dispersed in cities that are far from each other--made a point of getting to know each other and of cultivating jointly an Anabaptist or Mennonite identity. Since 1992, this relationship has been rooted in Encuentros Menonitas Españoles (EME – Spanish Mennonite Get-Togethers), which were held every two years. After a few years it organized as a fraternal association, called Anabautistas, Menonitas y Hermanos en Cristo – España (AMyHCE). AMyHCE participated in FEREDE, the association of Spanish Protestant churches and also in Mennonite World Conference (MWC). In MWC AMyHCE was rather unique in having all of its churches, with their various connections with the historic Anabaptist denominations, participate jointly under this single representation.

Between 2000 and 2020 the following Anabaptist group was active in Spain:

Gallardo, Jose. Freedom for the Captives: How Love is Rebuilding Lives in Spain. Scottdale, 1988.