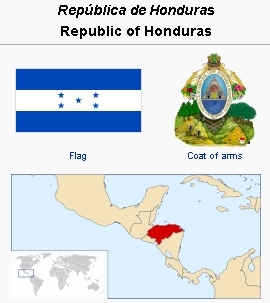 Honduras, a republic of Central America, is bordered to the west by Guatemala, to the southwest by El Salvador, to the southeast by Nicaragua, to the south by the Pacific Ocean at the Gulf of Fonseca, and to the north by the Gulf of Honduras, a large inlet of the Caribbean Sea. The total area of Honduras is 112,492 km2 (43,278 square miles). The country is mountainous, very fertile, though mostly uncultivated, and covered with rich forests. The chief export was bananas, but it also has valuable minerals and extensive cattle raising.

Some statistical reports indicate that membership in the Roman Catholic Church is declining while membership in Protestant churches is increasing. The International Religious Freedom Report, 2008, noted that a CID Gallup poll reported that 47% of the population identified themselves as Roman Catholic, 36% as evangelical Protestant, and 17% provided no answer or considered themselves "other." However, numbers vary from survey to survey.

The Honduras was formerly known as Spanish Honduras to differentiate it from British Honduras (now Belize). Its capital is Tegucigalpa.

The Eastern Mennonite Board of Missions and Charities (MC) established a mission in Honduras in 1950. By 1957 the three stations of Trujillo, Tocoa, and Gualaco had been established. Nine full-time and two short-term workers were on the field, three others were in language school, and two were on furlough. The membership was 30.

North of Honduras was the small colony of British Honduras (now Belize). In 1958 three Mennonite groups from Mexico were in the process of buying land and settling in British Honduras. These were the Old Colony Mennonites, the Kleine Gemeinde, and the Sommerfelders. Old Colony Mennonites of Durango were negotiating for land in the Republic of Honduras. These Mennonites were leaving Mexico because of their need for more land and because of a feeling that government regulations in Mexico were encroaching too much on the freedom of their settlement life.

In May 1959 a total of over 360 families totaling 1,627 persons (775 children under 14) had settled in three locations in British Honduras (Belize), largely in three colonies: Blue Creek settlement in the extreme northwest corner on a 115,000-acre jungle tract; Belize (actually 50 miles west of the city) on an 18,000-acre tract; and Orange Walk (60 miles north of Belize) on scattered individual family farms who expect to settle on a 17,000-acre tract at Shipyard, nine miles south of Orange Walk.  -- Melvin Gingerich

Eastern Mennonite Board of Missions and Charities (Lancaster Conference, Mennonite Church) was the first Mennonite group to come to Honduras. It began work in 1950 in the coastal town of Trujillo, and from there moved inland to rural, then urban areas. Evangelism was priority but went hand-in-hand with medical, educational, agricultural, and community-based programs. Voluntary service workers first came in 1959 and later worked with Honduran youth in community and church programs.

The growing national church gradually assumed leadership and became autonomous as the Iglesia Evangélica Menonita Hondurena (Honduras Mennonite Church) in 1969. Membership in 1987 reached 2,600 in 55 congregations subdivided into six geographical regions. Oversight is provided by a national president and executive committee, regional councils and coordinators, and an annual national council composed of pastors and congregational representatives. Church offices were in La Ceiba. In 2003 there were 104 congregations with 9000 members.

From the early 1970s onward a charismatic emphasis, typical also in other denominations, had influenced many congregations; and in the early 1980s, beginning particularly with the work with Salvadoran refugees, came a new emphasis on how Anabaptism is contextualized in the Honduras setting. The two movements have brought moments of conflict and confusion to the church.

Education and leadership training have continuously received focus. From the start in Trujillo a Bible Institute helped prepare new leaders, and in following years it continued in various forms; in 1987 both residence and theological education by extension programs helped train new and continuing pastors and lay leaders. A grade school was operated several of the early years in Tocoa. Pine Grove Academy in Tegucigalpa was founded in 1964 as a boarding school for missionary children, and from 1977 on was operated by an independent board of various evangelical churches, serving both nationals and expatriates. The Mennonite Vocational Institute in La Ceiba opened in 1975 to offer vocational preparation to national students and was operated by the Ministry of Education since 1979. In 1987 some 20 Honduran pastors were studying with SEMILLA, a seminary based in Guatemala City that offers extension education (Consulta Anabautista Menonita Centroamericana). These pastors in turn shared learnings through the national Bible Institute programs.

Amor Viviente (Living Love) was founded in 1974 in Tegucigalpa, also by Eastern Mennonite Board workers, although the intent at the start was not to form a new group, but to provide a Christian witness and alternative to urban youth caught in the power of drugs, alcohol, prostitution and abandonment. The charismatic ministry grew rapidly as youth saw a practical Christianity that brought healing and liberation. From Tegucigalpa, Amor Viviente extended into other urban centers, and became a missionary church sending workers to New Orleans in 1985, and to San José, Costa Rica, in early 1988. By 1987 Amor Viviente in Honduras included 17 congregations in primarily urban areas, with a total membership of 2,800. Its members' growth strategy is through cell groups, where evangelism and discipleship occurs. Other ministry areas include a drug and alcohol rehabilitation center, counseling. children's clubs and nutrition program, Bible Institute, and music ministry. In 2003 there were 48 congregations with ca. 10,000 members.

The Guaimaca Mennonite Church is located in Guaimaca, Olancho, inland from Tegucigalpa, and has a unique history, beginning from 1968, when an Old Order Amish family from Aylmer, Ontario, settled there as part of Amish interest in evangelization by colonization. From 1968 through 1970 at least 10 families from Canada and Indiana moved to the settlement. By 1974 there were 16 Amish families living in the colony.

Several of the original families bought two large farms which were divided and sold off to other families. Each family established its separate home and occupation, with the latter including vegetable and dairy farming, mechanic and furniture shops, a general store, feed mill, and farm supply.

In the early years traditional Amish practices were upheld, with the exception that some Spanish, rather than exclusively German, was used during church services. A planeload of draft horses was brought from Canada with the hope of promoting, among Honduran neighbors, better means for working the soil. The group was intent on sharing the gospel of Jesus Christ, as well as care and cultivation of the soil, dairy methods, etc. They soon established an orphanage, a school for local children, and an English school for Amish children.

With time there were changes. Intermarriage with Honduran church members was on the horizon; a promising outreach in another community required hiring a truck because mountainous terrain was unsuitable for horse and wagon transportation. More conservative families gradually returned to the United States and Canada. As this happened, and as Amish customs were being abandoned, the group decided on a major change. Because the draft horses did not do well in the Honduran climate, and other equipment and transportation needs were not easily met, the group decided to permit tractors for farming and to permit the use of other motorized vehicles. Those families not in agreement with this decision sold their properties and left, leaving North American families as a minority within the settlement. The Honduran group then affiliated with Beachy Amish Mennonites in North America. (They had been known as "Mennonites" from their first days in Honduras, not as "Amish.") A further division within the group took place in 1986 over issues of appropriate dress. Slightly more than half of the members separated, built another meetinghouse, and affiliated with a less conservative Beachy Amish group, receiving bishop oversight from Indiana. It had three established congregations. The more conservative group, meeting in two congregations, was affiliated with the Fellowship Churches.

Both groups continued to be active and were well known for their various forms of work and ministry, including their care of the land, dairying, feed mill, bake shop, sale of produce in local markets, schools for local children, children's home, and homes for older youth. Approximate total membership in January 1988 was 200. Their distinctive dress and disciplined lifestyle set them apart as a well respected group in the Guaimaca community. -- Janet M. Breneman

In 2020 the following Anabaptist groups were active in Honduras:

Shelly, Linda and Grace Weber. "The Development of 'Word and Deed Ministry' in the History of the Honduran Mennonite Church." Unpublished paper, San Marcos, Honduras, 1985. Available at MCC, Akron, PA.