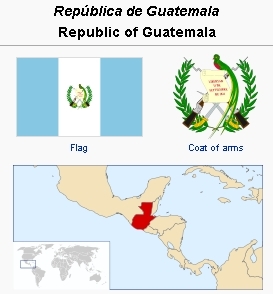 Guatemala, located in Central America, is bordered by Mexico to the north and west, the Pacific Ocean to the southwest, Belize and the Caribbean Sea to the northeast, and Honduras and El Salvador to the southeast. The nation is mountainous except for the south coastal area and the vast northern lowlands of Petén department. The total area is 108,890 km2 (42,042 square miles).

In July 2009 the estimated population was 13,276,517. Europeans and those of mixed Amerindian-Spanish background, called Mestizos or Ladino, make up just under 60% of the population, while the vast majority of the remainder of the population is composed of various indigenous Maya people including the K'iche, Kaqchikel, Mam and Q'eqchi.

Guatemala, like the rest of Central America, was colonized by the Spanish, beginning in 1518. The nation gained independence from Spain in 1821. The Guatemalan Civil War, running from 1960 until 1996, resulted in the death of approximately 200,000 civilians, mostly Mayan. Various military governments were responsible for the vast majority of these deaths.

Approximately 50-60% of the population is Roman Catholic, while around 40% are Protestant. Protestant groups have grown dramatically in the last several decades.

Mennonite involvement in Guatemala began in 1964 when the Conservative Mennonite Fellowship began work among villagers in Chimaltenango, leading eventually to the Conservative Mennonite Fellowship, Guatemala. In 1968 the Eastern Mennonite Board of Missions and Charities (MC) and the Washington-Franklin Mennonite Conference (later continued by the Franklin Mennonite Conference) began work with Spanish-speaking (Iglesia Menonita de Guatemala) and Kekchi-speaking (Iglesia Nacional Evangélica Menonita Guatemalteca) people. The Eastern Pennsylvania Mennonite Church carries on mission work in Quetzaltenango. Mennonite Air Missions was organized in 1972.

In 1977 the Church of God in Christ Mennonite (CGC), began mission work in Guatemala, where they had participated in reconstruction following the 1976 earthquake. The first missionaries were Alvin and Mildred Koehn and Vada Unruh. In 1988 four couples and three single women served the three congregations (Progreso, Sanarate and Jutialpa) and seven outposts located one to two hours north and east of Guatemala City. There were 19 baptized members and no ordained Guatemalan national leaders. A close relationship was maintained with the Church of God in Christ mission work in Mexico where the mission has published in Spanish the CGC hymnal and several booklets.

Membership in the Anabaptist-related groups in Guatemala include the following: