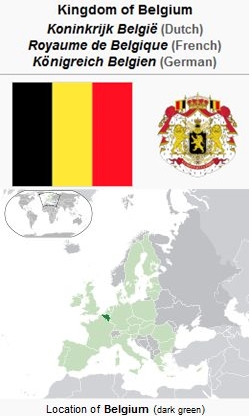 The Kingdom of Belgium is located in northwest Europe and is bordered by The Netherlands to the north, Germany and Luxembourg to the east, and France to the south. Belgium covers an area of 30,528 square kilometres (11,787 square miles), and it had a population estimated in 2010 at 10,827,519. Belgium is home to two main linguistic groups, the Dutch-speakers, mostly Flemish, and the French-speakers, mostly Walloons, plus a small group of German-speakers. Belgium's two largest regions are the Dutch-speaking region of Flanders in the north and the French-speaking southern region of Wallonia.

During the reign of Charles V Belgium was the southern part of the Netherlands and was governed in his name by the vice-regent, who resided in Brussels. The influence of the court upon the stadholders in the various provinces was more pronounced in the south than in the north; hence the religious persecutions were also more violent in the southern provinces than in the northern. In the south the powerful nobility remained on the side of the Catholic Church, giving it valuable support. Whereas at the time "heresy" in the northern provinces, and in particular in the provinces along the coast, consisted chiefly of Anabaptist elements, in the south it was more widely distributed over the country and embraced both Lutherans and Reformed in addition to the Anabaptists. Especially the Reformed made rapid gains under the leadership of Calvin's disciples, after Charles had transferred the crown to his son Philip II in 1555.

But the Anabaptists were also very numerous in Flanders. In organization and structure these congregations differed from those of the north, though the influence of Menno Simons was doubtless strong here too. In Friesland the center of gravity lay in the circle—certainly very small—of elders, and in the south it lay rather in the community. This difference was the chief cause of the dissension which broke out in Franeker in 1567, and which led to the split between the Flemish and the Frisians. In addition to this difference the northern congregations, especially in Waterland, were more lenient in the application of the ban and avoidance in marriage. A third factor lay in the fact that there were a larger number of well-to-do and respected citizens among the Mennonites, even though most of the members there too were small artisans and craftsmen (members of the guilds). The more elegant dress of many of the refugees from Flanders offended the plainer Frisians. A fourth characteristic was that many of the Belgians, and particularly the Flemish Mennonites, were weavers. The weavers, fullers, and cutters were united in guilds, and this circumstance was doubtless of some significance.

Whereas in the north the followers of Melchior Hoffman were more numerous, there is little information concerning their activity in the south. It is, however, known that Jan van Geelen preached at Antwerp in 1534. He lived in the home of a certain Jacob van Antwerp in "De Tinnen Pot" (Pewter Jug). David Joris, who was presumably born in Bruges—he at first called himself Johan van Brugge—apparently also had followers in Flanders. Likewise it may be assumed from statements made by the inquisitor Cornelis Adriaensz that there was among others a circle of Nikolaites in Bruges. Also the unitarian ideas of Adam Pastor found reception among some here, as was revealed in the cross-examination of the martyr Herman van Vlekwijk. On the other hand, some martyrs of Belgium did not hold Melchior Hoffman's views on the Incarnation, which Menno adopted.

It is not yet possible to write a connected history of Anabaptism in Flanders. To the present, research in its development is still to be done, and there has not been a single investigation devoted solely to the Belgian Mennonites. One great handicap is the absence of any written church records for any of the Belgian congregations. In the prolonged war against Spain and particularly between 1575 and 1585 these congregations were completely wiped out. Here and there one finds isolated references in Blaupot ten Cate, and the rest must be hunted out of van Braght, from various printed archives, and from chronicles and descriptions of Belgian cities. By this method a mass of material can very likely be assembled; but it will probably never be possible to obtain a complete picture. It may be that at some later time thorough research will reveal new information on the struggles of the Reformation in Belgium.

Among the elders who were in the circle of Menno's chief co-workers three men can be named with certainty: Gillis van Aken, Hans Busschaert or de Wever, and Leenaert Bouwens. Bouwens baptized 292 persons in Antwerp before 1565, 23 in Brussels, 31 in Doornik, 242 in Ghent (this figure may be an error, and should possibly read 116), 13 in Ypres, 25 in Kortrijk, 5 in Mechelen, 47 in Meenen, and 43 in Nijpkercke. Concerning the strength of the Mennonites, Cornelis Adriaens reported that there were 700 Mennonites in Bruges in 1568, and Morillon that there were 2,000 Anabaptists in Antwerp in 1566. These figures seem somewhat questionable, because Cornelis, a monk, is not dependable, and Morillon claims no fewer than 50,000 Calvinists in a population of 86,000. This must be a great exaggeration. We may nevertheless assume that the number of Anabaptists was great, because so many Belgian martyrs are known. As a rule, only small parts of the congregations were imprisoned, and hundreds must have fled to the north after the release of a very sharp edict against the Anabaptists in 1555. Even before this edict, the mandate of Charles V had appeared in Belgium in 1538. 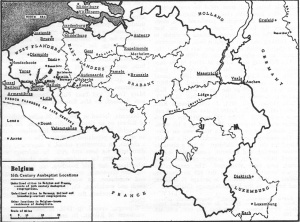 This fugitive type of emigration gradually took place on a larger scale, and many localities were represented, chiefly in Flanders. At the beginning the preachers and elders remained at their post; but since persecution sought out the leaders in particular and punished them most severely, some of them also took to flight; concerning this Jacob de Roore (or Keersgieter) passed severe judgment. The earliest refugees in many cases settled in East Friesland, especially in Emden. Later refugees settled in the principal towns of Friesland, Holland, and also Twente, introducing the weaving trade there. Even though the majority stemmed from Flanders, there were also Walloons among them; for there was a congregation of Walloons in Leiden, and as late as 1626, when the Mennonites had been totally expelled from Belgium, Virgile de Las had the writings of Menno Simons, Dirk Philips, and Jacques Dosie translated into French for them. Blaupot ten Cate lists a large number of Mennonite families who were descendants of the refugees, among them many with French names; in De Navorscher of 1904 are found the names of refugees who had settled in Haarlem.

This general flight is easily understood in the light of the violent persecution raging at the time, which, especially in the south, consigned the captured ones to the stakes. Whereas in the north, according to the report of the inquisitor Lindanus, the Mennonites were generally given a period of from one to six weeks to recant, they were usually executed within a week after capture in the south. The number of executions can no longer be exactly determined, but I estimate it at more than 800. Most of them are named in Het Offer des Heeren and in the Martyrs' Mirror in alphabetic lists of martyrs and localities, and in the Bibliographic des Martyrologes Protestants Néerlandais II. J. Meyhoffer published in the Martyrologe Protestant des Pays-Bas (Nessonvaux, 1907) lists from Kortrijk, Rijssel, Doornik, Valenciennes, and Liege. P. Génard had all the archives relating to persecution in Antwerp published in the Archievenblad of Antwerp.

In November 1945 the Mennonite Relief Committee (MRC) of Elkhart, IN, representing the Mennonite Church, began relief work in Belgium which continued until 1950 and was followed by the inauguration of a direct missionary effort in the autumn of 1950 wit the sending of David and Wilma Shank and Orley and Jane Swartzentruber a year later. An MRC reconstruction unit rebuilt numerous houses in the badly ruined village of Bullange in eastern Belgium 1947-48.--Nanne van der Zijpp

David and Wilma Shank created Foyer Fraternel in 1950 when they arrived as missionaries from the Mennonite Board of Missions & Charities. They organized the first Mennonite congregation in Brussels in 1953 with Jules Lambotte, Jr. ordained as an evangelist under Shank's leadership. A second congregation emerged in 1955 in Rixensart. In 1957, Mauro Sbolgi began a ministry among Italian and Spanish miners near Charleroi that led to the creation of the Brussels Spanish-speaking congregation in the early 1960s. In 1960, Jules Lambotte founded Lighthouse Publications, located in Flavion since 1965.

In addition to MBM's personnel and financial involvement in these efforts, David and Wilma Shank administered the Home of Hope orphanage in Ohain during the 1950s and helped establish the Protestant Social Center in Brussels in the early 1960s. Vasil Magal of La Louvière produced radio programs for broadcast to Russia through Mennonite Board of Missions Media Ministries after 1958.

Mennonite Central Committee volunteers served in Brussels from 1969 to 1983 in the Foyer International David Livingstone, directed from 1973 to 1979 by Robert and Wilda Otto. Other Mennonite Board of Missions workers in 1987 were Stephen and Jean Gerber Shank, and Robert and Sylvia Shirk Charles. The Missions Interests Committee of the Beachy Amish Mennonite Fellowship began work in Poperinge late in 1986. -- Robert Charles

Between 2000 and 2009 the following Anabaptist groups were active in Belgium:

Annual Reports of Mennonite Board of Missions (1951ff.).

Shank, David A. "Discovering the Strategy of the Spirit," in Being God's Missionary Community. Elkhart, IN: Mennonite Board of Missions, 1975: 23-30.

Shank, David A. Mission from the margins: Selected writings from the life and ministry of David A. Shank, James R. Krabill, ed. Elkhart, Ind.: Institute of Mennonite Studies, 2010. Available in full electronic text at https://palni.contentdm.oclc.org/digital/collection/p15705coll31/id/257.