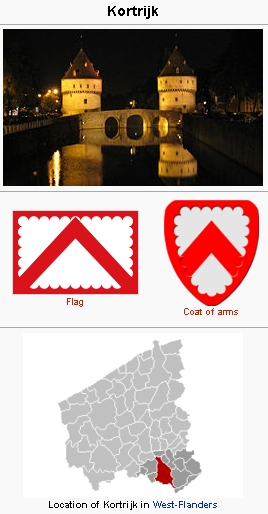 Kortrijk (Courtrai), a town (population: 1949, 40,825; 2006, 73,857; coordinates: 50° 50′ 0″ N, 3° 16′ 0″ E) in West Flanders, Belgium, in the 16th century was a center of cloth and linen weaving and the seat of a Mennonite congregation. Anabaptists were found here as early as 1533. In this year Jacques van der Mase, who had read Rothmann's booklet Van de WraKe, traveled to Münster and visited a large number of Anabaptist groups and congregations in Holland. After the fall of Münster (July 1535) he returned to Belgium, apparently cured of his revolutionary ideas. After spending some time in Bruges he returned to Kortrijk in 1537 or 1538. Through the activity of van der Mase and the mysterious Pieter van Gelder a congregation arose in Kortrijk, of which, however, very little is known. In 1553 Kortrijk is said to have been the most infected (with Anabaptism) town of Flanders. In 1553 Joos Kindt was arrested here and put to death. In 1556-1561 a number of other victims followed. In 1568-1569 other martyrs died, most of them weavers. The total number of Anabaptist-Mennonite martyrs executed at Kortrijk was 24, and one died in prison. A number of Anabaptists from Kortrijk died as martyrs in other towns of Flanders; seven of them suffered death at Ghent. In addition to the information concerning the Kortrijk congregation given by its martyrs it is also known that Leenaert Bouwens baptized 14 persons here in 1554-1556, and 11 or 18 in 1557-1561. Jacob de Rore in his first letter of 1561 greets "the friends of Kortrijk." It is not clear whether the congregation died out or was dispersed in 1569, when on 30 April six Mennonites were put to death here. In any case its activity declined and nothing is heard any more of a congregation in this town. Yet it may have led a hidden existence, since shortly after 1600 some Mennonites from Kortrijk, among whom were members of the de Hauterive (van Outrijve) and the Steenkiste families, moved to Aardenburg in the Dutch province of Zealand and to Haarlem, North Holland.