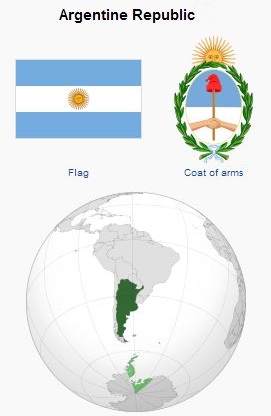 The Argentine Republic is a Spanish-speaking republic on the Atlantic side of the Andes in the southern part of South America and is bordered by Chile to the west and south, Bolivia and Paraguay to the north, and Brazil and Uruguay to the northeast. With an area of 2,766,890 km2 (1,068,302 sq. mi.) and an estimated population in 2012 of 41,281,631, it is, next to Brazil, the second-largest country in South America.

Argentina was sparsely population by several indigenous peoples groups. The Spanish first arrived in Argentina in 1502. Independence was declared in 1816.

Argentina is a country of immigrants. Most Argentines are descended from colonial-era settlers as well as 19th and 20th century immigrants from Europe, with most coming from Italy and Spain. Argentina also has a significant Chinese population.

North American Mennonite missionaries (Mennonite Church (MC)) first entered the country in 1917 (see Iglesia Evangélica Menonita, Argentina), locating in the territory 50-150 miles (80-240 km) west of Buenos Aires, which became the heart of the Mennonite mission enterprise there. Work was established at Cosquin in the province of Cordoba in 1935, among the Indians in the far north Chaco territory in 1943, and in the capital city of Buenos Aires in 1949. The North American staff of the mission has averaged twenty to twenty-five people, with a church membership of 745 in 1953. The church organ was La Voz Menonita (1932-1961).

In 1948 about 150 Russian Mennonites forsook the transport en route from Germany to Paraguay while it was temporarily stalled in Buenos Aires, and settled largely in the city and its environs as day-laborers. Additions to the group from Paraguay after that time increased the total of Russian Mennonites in the country to over four hundred. Since the group lacked all church privileges, the Mennonite Central Committee, at the request of the various interested Mennonite mission boards of North America, established a religious and social center in the city in 1949, at first under the direction of Bishop Nelson Litwiller of the Argentine Mennonite Mission, but after 1950 under the direction of the minister Martin Durksen, formerly of Paraguay.

Political life in Argentina in the 1960s and 1970s was marked by political authoritarianism and military dictatorship. But the Roman Catholic church was beginning to move in the opposite direction, towards ecumenism, social justice, structural change and liberation, in response to reforming currents spreading from the Second Vatican Council.

The Iglesia Evangélica Menonita, Argentina (IEMA; Argentine Evangelical Mennonite Church) extended its work in Buenos Aires in the 1960s and also established mission work in the province of Río Negro. Extending the presence of Mennonite churches into Patagonia was contemplated already in 1959. An exploratory trip in 1963 led eventually to the city of Choele Choel being chosen as a good place to begin establishing a church, located as it was in the center of an agricultural area on the Río Negro river. By 1974 there were 17 families relating to the church there.

The IEMA's assembly in 1971 set a new organizational direction for the denomination. It ended the office of bishop, with pastoral functions assumed by secretaries of the different national zones, and a new confession of faith was approved. The role of missionaries also came up for discussion. Some thought that it would be best if the missionaries would focus on education, music, and leadership formation. Others were of the opinion that missionaries, by definition, should dedicate themselves to missions. Coloring these discussions was a new economic reality. In October 1970, the secretary of the Mennonite Board of Missions in the USA announced that financial support by the mission for pastoral work would be reduced to zero over a period of five years.

The movement of the Spirit in Argentina had different sources. On the one hand there was the preaching and speaking in tongues in the ministry of the Pentecostal pastor Juan Carlos Ortiz at the end of the 1960s, which shook up Protestantism in Argentina. On the other hand, the charismatic movement which began to revive the Argentine churches of the Free Brothers (Hermanos Libres), such in the case of pastors Alberto Darling and Jorge Himitian, and the case of the Baptist pastor Alberto Motessi in the 1970s, had a direct influence also in Mennonite churches. An important leader of the Mennonite church in Argentina, Nelson Litwiller, was also influenced by the charismatic renewal in the USA. In 1974 the IEMA counted 1,136 baptized members in 31 different churches.

In Argentina the military dictatorship and its “dirty war” of clandestine disappearances of civilians of the 1970s and early 1980s came to an end in 1983, following Argentina’s defeat by Great Britain in the Falklands/Malvinas war. The country subsequently moved to democratically elected civilian governments. Economic difficulties accompanied by large debt followed. Argentina followed International Monetary Fund policies by cutting funding to health and education and at the same time privatizing national resources. The results were not positive. The Argentine economy completely collapsed in 2001, and the country defaulted on its international loans. By the next year, an estimated 60 percent of Argentineans were living below the poverty line. -- Jaime Prieto Valladares

From 1989 to 2019 the IEMA reorganized into four regions, each one with its own organization, leadership, meetings and activities. In 2020 the following Anabaptist groups, including IEMA, were active in Argentina: