During the 13 years, 1904 to 1917, the movement developed that gave birth to the Argentine Mennonite Mission. Mennonite youth in Goshen College studied about the neglected South American continent. Churches and individuals contributed to a fund for South American missions. The Mennonite Board of Missions and Charities in 1911 sent J. W. Shank as its representative on a six months' tour of investigation in Peru, Bolivia, Chile, Argentina, and Uruguay. Then followed a general solicitation campaign that brought over $20,000 for the new mission. By the late summer of 1917 the four missionaries under appointment, the T. K. Hersheys and J. W. Shanks, sailed to Buenos Aires, arriving on 11 September. 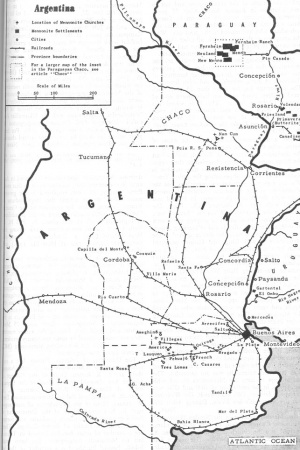 The task before these novices was to survey the great Argentine field and choose a strategic region for the proposed mission. After 14 months of language study, during which time also the missionaries made extensive survey trips in the interior, they chose the rich agricultural region some hundreds of miles directly west of the capital. The transfer to Pehuajó, the chosen center for the new mission, was made early in 1919.

By 1953 the total membership had reached 650 while the church community attendance at services reached approximately 1,500. During its first 35 years of existence the mission acquired 28 properties valued at 480,555 Argentine pesos. Among these properties there were 14 churches, 17 pastoral homes, 2 children's homes, and a Bible school. The working staff in 1952 consisted of 27 missionaries and 20 native Christian workers who gave all their time to religious or educational work.

The original policy of the Mission was to evangelize the people of the rural regions and not to seek locations in Buenos Aires. After 25 years, however, it became necessary to form in Buenos Aires a church composed of Mennonite families and individuals who had moved to the great city. With the exception of this one church, all other churches are located in progressive rural towns and villages. Only the Chaco Indian mission was entirely rural.

Not least among the Mission's activities were the institutions that were founded. The printery made possible the distribution of hundreds of thousands of tracts, pamphlets, and other literature. The orphanage for more than 25 years sheltered children, many of whom grew up and formed Christian homes. The Bible school produced trained men and women for the ever-extending service of the mission. -- JWS

This conference was first organized in 1923 by missionaries of the Mennonite Board of Missions and Charities, and was composed of all bishops, ministers, missionaries, appointed national workers, one delegate for each congregation up to nineteen members and two for congregations of twenty or more throughout Argentina. While the custom had been to hold yearly meetings, this changed to biennial meetings in 1942, due to the high cost of bringing together the delegates from such widely separated zones and districts. In the alternate years the general young people's institute met, at which time a pastors' meeting usually was convened to take care of any necessary reorganization or business. As recently as the 1950s, all these meetings were held in the splendid eucalyptus campground near Trenque Lauquen.

As of the 1950s, the convention of this conference was largely a spiritual meeting to which speakers from other denominations were invited, but reports were heard from such committees as the following: the Bible Institute, the Old People's Home, the Young People's Institute, the Children's Camp, the Publication Committee, the Historical Committee, Women's Evangelical Society, Pastors' Meeting, Charities and Welfare, and from the following individuals: the general secretary, the delegate to the Confederation of Evangelical Churches, and from one delegate from each congregation represented. Recommendations were made toward the greater efficiency of the work and the witness of the church. -- EVS

All properties and institutions of the Argentine Mennonite Mission described above were transferred to the Iglesia Evangélica Menonita, Argentina. Membership, reported at 650 in 1953, had reached 2,000 by 1988, with regular attendance at services totaling more than 3,000. Approximately 30 congregations were served by Argentine pastors, most of whom earned their own support. A few were paid salaries by their congregations. In 1988 one couple supported by Mennonite Board of Missions (Mennonite Church) was working in leadership training. The Argentine Mennonite Church was growing toward maturity and responsibility. Several congregations were located in Buenos Aires.

The Mennonite Bible School at Bragado, Buenos Aires, closed when the Seminario Evangélico Menonita de Teologia (Mennonite Theological Seminary) opened at Montevideo, Uruguay in 1955 (closed 1974). Argentine Mennonite Church leaders studied at seminaries of several different denominations in Buenos Aires. Many were trained in their own congregations through a program affiliated with the Facultad Latinoamericana de Estudios Teológicos. The church owned a campground in Bragado, where general conferences were held annually. The official periodical of the conference, La Voz Menonita (The Mennonite Voice, 1932-1961) became first El Discipulo Cristiano (The Christian Disciple), and then Perspectiva (Outlook). -- ROG