The first Mennonites to come to South America were a few individuals from Germany and Russia who came to Brazil before World War I (e.g., a Lichdi from Herrlihof near Augsburg, and a Frederico Arentz from Hamburg, who aided the Mennonite Central Committee in its service to the first Russian Mennonite refugees settling in Brazil in 1930 ff.). Some also came to Argentina. The next to enter South America were Mennonite missionaries from North America. The first was the Mennonite Church (MC) with its mission work in central Argentina (1917) and later in the Argentine Chaco (1943), Brazil (1954 in the state of Sao Paulo, and the same year in the Amazon River region by a private board taken over by the General Board in 1957), and Uruguay (1954 in Montevideo). Both the General Conference Mennonites and the Mennonite Brethren missionaries entered Colombia in 1945, the former in the central part, and the latter in the Choco area on the Pacific Coast. In the same year the Mennonite Brethren Church began a mission in Curitiba, Brazil. The total number of members in all the missions by 1957 was about 1,000 (Argentina 673, Mennonite Church; Colombia about 300, General Conference and Mennonite Brethren; Brazil about 25, Mennonite Church).

The Mennonite colonization in South America has been by three groups: (1) Russian Mennonites to the Paraguayan Chaco from Manitoba and Saskatchewan (Sommerfeld Mennonites in 1926 and in South Paraguay in 1948); (2) refugees from Russia in 1930 to the state of Santa Catharina, Brazil—later displaced completely to the states of Curitiba and Rio Grande do Sul—and the Paraguayan Chaco (Fernheim Colony), a part going later to East Paraguay (Friesland); (3) refugees from Russia in 1948 to Paraguay (Chaco-Neuland, East Paraguay-Volendam); (4) Danzig and Galician Mennonites to Uruguay in 1948-1950 (El Ombu) and 1951 (Gartental) with Delta added in 1955, and a congregation being organized in Montevideo in 1957. About 500 refugees had also finally located in Argentina, largely by transfer from Paraguay. Fewer than 150 of these were gathered into a Mennonite congregation in Buenos Aires.

The total Mennonite immigration to South America according to Fretz has been ca. 11,000:

A certain amount of return migration took place from Paraguay to Canada from the Sommerfeld colonies—Menno (1926-1930), Bergthal, and Sommerfeld (1948-1950), but this ceased. On the other hand, a substantial emigration from the refugee colonies in Paraguay took place and was still going on in the 1950s. From Paraguay some 800 moved to Canada, and about 150 to Germany. About 100 also moved from Brazil to Canada.

Two German language Mennonite church papers were published in South America in the 1950s, the Menno-Blatt (founded 1930) by the Fernheim Colony administration at Filadelfia, Paraguay, and Bibel und Pflug (founded 1954) published privately at Witmarsum, Brazil. The first Brazil Mennonite paper, Die Brücke, was published privately at Witmarsum 1932-1937, then for a short time by the Krauel Colony in 1938. The only Spanish language Mennonite periodical in the 1950s was La Voz Menonita, published from 1932-1961 by the Argentine Mennonites (MC). In 1955-1958 a settlement of some 260 souls from Menno and Fernheim, Paraguay, was established near Santa Cruz, Bolivia. -- Harold S. Bender 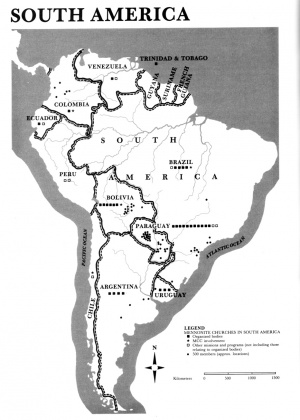 The first 50 years of Mennonite experience in South America took place predominantly in immigrant, German-speaking communities. From the 1950s to the 1980s indigenous churches of Native American and Latino people numbering about 12,300 members in 10 countries took prominence. This indigenous church grew out of North American Mennonite mission effort and the witness of the immigrant Mennonite communities. By 1988 the immigrant communities numbered about 19,000 baptized members and still largely lived in colonies. In 1957 there were about 1,000 indigenous and 7,150 immigrant Mennonite church members in five South American countries.

After 1957 the indigenous churches grew mostly by evangelism while the immigrant communities grew through major migrations from Mexico and Belize along with smaller migrations from Canada and the United States. The immigrants went primarily to Bolivia and Paraguay (in 1986 also to Argentina). In the immigrant colonies established earlier, rapid natural growth was largely offset by return migration to Canada and to Europe. In 1988 there were at least 10 North American Mennonite and Brethren in Christ mission agencies operating in South America. The agencies supported the work of the established churches and in a number of cases expatriate missionaries worked under national leadership. In the 1980s the mission agencies initiated work in Venezuela, Ecuador, Peru, and Chile. At the end of the 1980s a major concern was to find ways for the national churches and mission agencies to work in partnership.

Growing contacts between the indigenous and immigrant streams of Mennonites and the revolutionary political climate in the region painfully highlighted the growing economic gap between the two streams. Prosperous Mennonite colonies on the one hand were deeply involved in international economics through import and export while on the other hand a substantial number of indigenous Mennonites struggled for survival. The disparities raised questions whether a common identity could be forged. At the same time common efforts in mission and service resulted in notable integration of the two streams in some places, e.g., in Uruguay.

Mennonites, Amish, and Brethren in Christ in South America in 1986 ranged from (1) the religiously conservative and culturally isolated to (2) middle class professionals integrated into larger society to (3) those suffering due to their work for social justice. Immigrant Mennonite communities were still obvious subcultures in terms of language, church polity, the arts, and occupations. However, third-generation immigrants were showing signs of integration with the larger society through pursuit of higher education, employment choices, and more relationship with indigenous churches.

In 1974, the Mennonite Biblical Seminary moved from Montevideo to Asunción, Paraguay, where, renamed Centro Evangelico Menonita de Teologia Asunción (CEMTA), it provided biblical and theological training in both German and Spanish serving the Southern Cone countries. The Instituto e Seminario Bíblico dos Irmãos Menonitas (ISBIM; Mennonite Brethren Seminary and Bible Institute) in Curitiba (Brazil), served both immigrant and indigenous churches, primarily in the Portuguese language. Bible institutes or theological education by extension programs operated in most of the countries. The German-speaking Mennonite communities operated their own elementary and secondary schools.

Mennonite ecclesiology and theology have been heavily influenced by conservative evangelical Protestantism. However, Anabaptist emphases on community, discipleship, service, and peace were increasingly prominent as the Latin American Mennonites and Brethren in Christ lived out their faith in the context of economic disparities and social ferment. The churches were known as peace churches both through their service in conflict situations and conscientious objection positions. Worship patterns varied widely, reflecting borrowings from both Pentecostal and European Protestant traditions. Since Vatican II there was some interaction with Roman Catholics, albeit limited.

Brazilian Mennonites hosted the Mennonite World Conference general assembly in Curitiba in 1972. In the 1960s and 1970s the Congresos Menonitas Latinoamericanos promoted continent-wide inter-Mennonite study and fellowship events. Those events discontinued in the 1970s due to distance and diversity, but regional consultations for the Southern Cone and the Andean Region countries emerged in the late 1980s. Latin American Mennonites maintained connections with the global Mennonite community and many had family connections in Canada. The Latin American churches were providing growing numbers of church and theological leaders to the larger Mennonite church. -- Herman Bontrager

Mennonites and Brethren in Christ in South America, 1986 (compiled by Herman Bontrager)

1Immigrants from Canada, Russia, Poland, Mexico, Belize, and USA, plus their descendants.

2Mennonite Board of Missions and MCC have programs; no local church members.