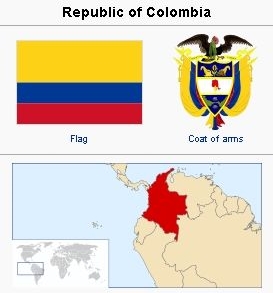 The Republic of Colombia is a republic in northwestern South America, bordered to the east by Venezuela and Brazil, to the south by Ecuador and Peru, to the north by the Caribbean Sea, to the northwest by Panama, and to the west by the Pacific Ocean. The area of Colombia is 1,141,748 km2 (440,839 square miles). In 2010 the estimated population was 45,393,050. The majority of the population (58%) is Mestizo, or of mixed European and Amerindian ancestry. Approximately 20% of the population is of European ancestry (predominantly Spanish, partly Italian, Portuguese, and German), 14% is of mixed African and European ancestry, 3% is of mixed African and Amerindian ancestry, and 4% is of primarily African ancestry. Indigenous Amerindians comprise only 1% of the population. Official demographic statistics regarding religious affiliation are not collected, but based on various studies, more than 95% of the population adheres to Christianity, with the vast majority (between 81% and 90%) being Roman Catholic.

In 1954 Colombia Mennonite mission work was carried on by two branches of the Mennonite Church, both of them beginning in 1945. The Mennonite Brethren mission occupied a territory in Choco and in Valle on the Pacific coast and had three main stations, La Cumbre in Valle, Istmina and Noanama in Choco. Evangelistic, medical, educational, and linguistic work was done. There were 50 believers and a missionary staff of 16 members in October 1949.

The General Conference Mennonite Church was doing mission work in central Colombia in the department of Cundinamarca. Its principal work was located near Cachipay, where they operated a home and school for underprivileged children, a large percentage of whom came from a background of leprosy. Evangelistic work was also done in Cachipay, Anolaima, La Mesa, and La Esperanza. There was an evangelical community of about 150, of whom 81 have been baptized in 1954. There were nine members on the missionary staff. -- Gerald Stucky

The Colombia Mennonite Brethren Mission in South America had its beginning when Mr. and Mrs. Daniel A. Wirsche, who were sent there by the Board of Foreign Missions, arrived at Palmira, Valle for the study of the Spanish language in April 1945. The mission acquired its first property when the Board purchased an unoccupied, independent mission station at La Cumbre, Valle, in the hills. The chief field of the mission, however, lay in the Choco, which stretches along the Pacific Ocean from the mouth of the San Juan River north to Panama and the Caribbean Sea. The population of the field was variously estimated at several hundred thousand to four hundred fifty thousand.

The main stations in 1954 were at La Cumbre, Valle. and at Istmina and Noanama, Choco. Other places served as preaching centers. Besides being the seat of the first indigenous church, La Cumbre operated an elementary school for nationals as well as a school for missionary children patterned after the American eight grade curriculum. The dispensary service in charge of a nurse was in its beginning stages. Istmina in the Choco harbored the indigenous church group of the Chocoans. A dispensary was conducted by a missionary nurse. Preparation was in progress for a school for nationals. Evangelization at the stations consisted largely in house visitation and preaching in neighboring villages. Noanama was the center for linguistic work among the Indians. After the language had been reduced to writing and some translation of Scripture undertaken, evangelization among the Indians would be made possible. 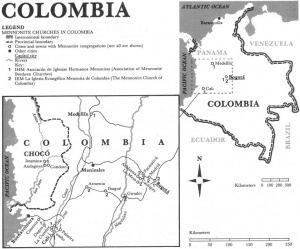 The Republic of Colombia, located on the northwest part of South America, was named after Christopher Columbus. The Spaniards discovered and settled it during the first 50 years of the 16th century. The settlers implanted the Spanish language and the Roman Catholic religion, thus establishing cultural patterns and some of the country's ethnic characteristics.

Colombia had an estimated population of 32 million in 1986. Its inhabitants are the descendants of white Europeans, black Africans, and native Indians. There is a common language, Spanish, spoken in all of the territory. In the small islands of San Andrés and Providencia in the Caribbean, English is also spoken. The relatively few Indian tribes speak their own dialects. Most of the population lives in urban centers, such as Bogotá, Medellín, Cali, and Barranquilla. Colombians are by nature open, friendly, religious, and resourceful.

Colombia takes pride in cultivating the use of good Spanish. Many poets, essayists, and novelists have made outstanding contributions to literature. Gabriel García Marquez, a novelist, received the Nobel Prize in literature in 1982. The work of contemporary painters, such as Fernando Botero, Alejandro Obregón, Enrique Grau, and others, are universally recognized. Cartagena, the historic city founded in 1535 on the Atlantic coast, has been declared part of the cultural patrimony of the world by the United Nations. Bogotá, the capital (5 million inhabitants in 1986; 7 million in 2005), is the cultural center of Colombia. It has two professional orchestras , several theater groups,and several colleges and universities. There are several large daily papers (most cities have local papers), broadcasting stations, and three television channels. The rate of literacy in the country was 81% in 1986 (92% in 2005).

Colombia is rich in gold, platinum, copper, emeralds (most emeralds on the world market come from this nation), coal, and oil. The main agricultural products are coffee, bananas, and other fruits, flowers, and vegetables. The average yearly income was $1,430 (U.S.) in 1983.

The majority of Colombians have been baptized in the Roman Catholic church at an early age. Marriages and burials are usually performed by this church. However, there is complete freedom to practice any religion that does not endanger Christian morality.

There are no official statistics regarding the Protestant community. The estimates go from 2,500,000 to as few as 250,000. A recent survey conducted by one of the Protestant groups gives 350,000 as a more realistic calculation. This equals 1.16 percent of the total population.

In 2020 the following Anabaptist groups were active in Colombia: