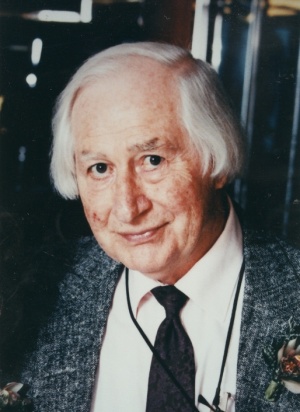 Jacob A. Loewen: linguist, anthropologist and missionary; born 1 September 1922 in Romanovka, Orenburg Mennonite settlement, Russia to Jacob and Katherine (Quiring) Isaac. Following the death of Jacob’s father when Jacob was still an infant, his mother Katherine married Abraham Loewen. In 1929, the Loewens migrated to Canada, but not before the two daughters of Abraham and Katherine died in childhood. It was also during this time that Jacob’s last name was changed from Isaac to Loewen. In 1945, Jacob married Anne Enns in Yarrow, British Columbia (BC). They had 3 daughters, Gladys, Doreen Joyce and Sharon, as well as one son, Bill. Jacob died on 27 January 2006 in Abbotsford, BC, Canada.

Upon arriving in Canada the Loewens settled first in Kronsgart, Manitoba, where Abraham found employment as a farm laborer. It was in Manitoba that Jacob, at age 10, had a conversion experience. In 1934 the family migrated to Yarrow British Columbia, where Jacob was baptized on 2 July 1939 and joined the Yarrow Mennonite Brethren (MB) Church. While Jacob struggled as a teenage to find acceptance with his peers in Yarrow, he soon learned to appreciate the kindness and support of the Yarrow MB Church’s senior pastor, Johannes Harder.

Jacob’s educational road was not without its detours and interruptions. Dropping out of school after completing the eighth grade, Jacob entered the workforce but attended the Yarrow MB Elim Bible School in winter. Upon completion of Elim’s five year program, (1937-1942) he attended the Chilliwack public high school for one year prior to entering wartime alternative service working in a Toronto, Ontario hospital and attending a Missionary Medical Training School (1943-1944) during off hours. While working with the West Coast Children’s Mission Jacob was ordained as a minister by the Yarrow MB Church on 27 February 1944. Following two years of study at Tabor College, Jacob received his BA degree in 1947. After being accepted by the MB Board of Missions for service in Colombia, Jacob and Anne attended a Summer Linguistics Institute at the University of Oklahoma. In 1953, upon completing a five and one half year missionary appointment in Colombia, Jacob enrolled in the University of Washington, where he earned his Masters (1954) and PhD (1958) degrees in Anthropology and Linguistics.

From 1945 to 1964 Jacob served the MB church, first as missionary in Colombia, (1947-1957 with a 2-year furlough while in graduate studies) and as a professor at Tabor College (1958-1964). It was in Colombia that Loewen discovered the importance of myth in religion and the need for expatriates to listen before preaching. While teaching at Tabor, Jacob and Anne Loewen along with David and Dora Wirsche were involved in summer mission and literacy work with a native church in Panama. It was here that the two couples sought to promote the independence and empowerment of the Panama Indian churches, comprised heavily of Indians from the Colombian Chacó, limiting the direct oversight of the Panamanian Indian church, the Iglesia Evangélica Unida, by expatriates and the MB Board of Missions. It was also during his professoriate at Tabor College that Jacob Loewen accepted the invitation of the Mennonite Central Committee (MCC) and the MB Board of Missions to analyze Mennonite resettlement attempts of Indians living near three Mennonite settlements as well as interracial Mennonite-Indian conflicts in the Paraguayan Gran Chaco.

From 1964 to 1984 Jacob Loewen served as translation consultant, first in South America with the American Bible Society, (1964-1970), headquartered in New York City and then in central and west Africa with the United Bible Societies (1970-1984), headquartered in London, England. It was especially in Africa that Loewen sought to move the Bible Society’s sanctioned translation process increasingly from the control of the expatriates to that of the local native churches. By 1984, Loewen’s problems with UBS policy as defined by officials in Africa led to Jacob Loewen’s forced retirement.

Following his retirement, Jacob Loewen focused on two main goals: interpreting the perspectives of non-Western indigenous cultures to the Euro-North American evangelicals, including Mennonite Brethren congregations – which increasingly led to tensions between Loewen and MB officials in the Fraser Valley - and publishing, all the while concentrating on what natives had taught him. Included here was his retrospective analysis of the Panama experiment. Following a serious stroke on 4 June 1993, Loewen concentrated his energies on preparing three major publications (testimonies to different populations) and organizing the Yarrow Research Committee charged with researching and publishing the story of the Yarrow immigrant community from the late 1920s to 1960.

Publishing became a way of life for Jacob A. Loewen. By 1996 Loewen had over 350 publications including articles, chapters in edited works, Bible Society technical studies, and book reviews, establishing himself as a leading theorist within the evangelical community in missions and Bible translation. His publications appeared in denominational church magazines and papers, including the Mennonite Quarterly Review, Bible Translator, International Journal of Linguistics, Journal of Church and Society, América Indígena, and especially during the 1960s, in Practical Anthropology (PA). In 1975 a selection of the PA articles were collected and published as Culture and Human Values. The results of his somewhat controversial Paraguay study, especially his description of racist beliefs and practices evident within the Mennonite colonies, were published in his reports to the MCC as well as the Mennonite Quarterly Review and Practical Anthropology.

Loewen died on 27 January 2006 survived by his wife Anne, the four children, six grandchildren and two step-grandchildren. In 2007 Jacob Loewen was posthumously honored in Winnipeg, along with Anne, one of the three individuals/couples selected for recognition for their work in and theorizing of missions by the Association of Anabaptist Missiologists.

"A Mennonite Encounter with the ‘Innermost’ of the Lengua Indians." Mennonite Quarterly Review (1965): 40-67.

Only the Sword of the Spirit. Winnipeg : Kindred Productions, 1997.

The Jacob Loewen papers, an extensive collection of correspondence, reports and technical papers, are housed in the Center for MB Studies, Fresno, California.