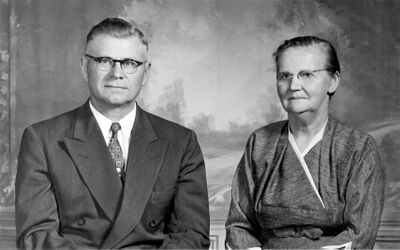 Johannes Abram Harder, pastor and conference leader: born 22 March 1897 in Rosenort, Molotchna Colony, South Russia, the fourth of ten children of Abraham A. Harder (29 September 1866-19 October 1941) and Justina (Epp) Harder (21 September 1871-July 1936). Soon after his birth, the Harders moved to the Crimea. In 1906, with nine children in tow, the family returned to the Molotchna where they established an orphanage in the village of Grossweide. The orphanage consisted of a large house on a small farm. By the early 1920s they were looking after 133 orphans, 21 of whom were Russian by birth. The Harders pressed their own children into service to manage this large operation. They also hired "Tina" Rempel to be the matron of the home who, although she was six years older than Johannes, would become his wife.

It was in Grossweide that Johannes received both his elementary and secondary education. He soon established himself as an excellent student and athlete, becoming a star athlete on the horizontal bar. After high school, Johannes entered university studies in Kharkov, intending to become a medical doctor. Owing to the political turmoil, he was forced to withdraw from studies after the first year.

On New Year of 1917 Johannes was converted. Two years later he was baptized and accepted into the Grossweide Mennonite Brethren Church.

Operating the orphanage in the aftermath of World War I and the Revolution of 1917 became increasingly difficult for the Harders. All religious instruction was forbidden. In the opinion of Soviet authorities, the senior Harders were too old to manage the operation, and so ordered Johannes to be in charge. 1921 was a particularly difficult year, with the effects of the Revolution and the resulting civil war. Food for the orphanage became very scarce, a situation made more perilous because getting food from their farm required crossing the front lines of several competing armies. On his last attempt to transport much needed supplies from their farm in Berdyansk (an area controlled by the White Russian army), Johannes was summarily arrested on entering Grossweide and accused of being a spy. Only the prayers of his community and the timely intervention of an attractive female spared Harder from the death sentence already pronounced by the local Red Army commander.

On 12 November 1922 the local Soviet government forced the orphanage to close operations. The request for all remaining orphan children to emigrate was categorically denied. Seeing no other options, Johannes and Tina left Soviet soil on 23 June 1924, and arrived in Canada on 17 July 1924.

After eking out a difficult survival first in Ontario, then for a time in Manitoba, Saskatchewan, and Alberta, they finally decided to make Yarrow, British Columbia their new home, arriving in January 1930. This community at once recognized Harder's leadership gifts. Within a year he was elected as pastor of the Yarrow Mennonite Brethren Church. In recognition of his ministry responsibilities, he was ordained on 9 July 1932 with Abraham H. Unruh officiating.

The Harders were to preside over this church for 18 years. In addition to onerous pastoral duties, Johannes also headed up the effort to organize a local high school, taught in the Elim Bible School and served on various Mennonite Brethren Conference ministries, notably being a long-term member of the Missions Board. Since all his church and conference work was unsalaried, he was obliged to run his farming operation as a means of livelihood.

During Harder's pastorate of the Yarrow church, membership grew rapidly, reaching 971 in 1948. Many felt that he ruled the church with an iron hand and that his wife was his equal in enforcing behavioral expectations. However, those who knew Pastor Harder intimately found him to be a thoughtful, sensitive man who could change his opinion when confronted. The compassion of both Johannes and Tina for people in need knew few boundaries. By the late 1940s the strain of leadership was resulting in excruciating headaches for Johannes. On 25 July 1949 he officially resigned as pastor.

After a period of recuperation that included a stint ministering in European Mennonite churches, the Harders were ready for their next assignment. On 18 July 1959 they moved to Black Creek where Johannes agreed to a three-year pastoral appointment in the local Mennonite Brethren congregation.

The Harders finally retired to Clearbrook where he continued to be active in preaching until a week before his death. Johannes died in the MSA Hospital in Abbotsford on 22 March 1964. Tina lived on to reach 101 years. She died 16 August 1991 in Clearbrook.

Harder, Johannes A. "I Was Led Away to be Shot." Unpublished account written by Harder in the 1950s and deposited at the Centre for Mennonite Brethren Studies, Winnipeg.

Regehr, T. D. A Generation of Vigilance: The Lives and Work of Johannes and Tina Harder. Winnipeg, MB: CMU Press, 2009.