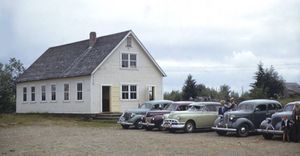 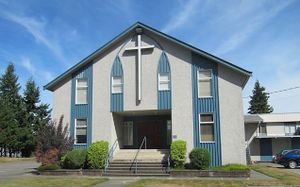 Settlement in the Black Creek area of Vancouver Island was considered by Mennonites in the early 1930s when the Comox Colonization Society began advertising the sale of 100 acre plots of recently logged land. The land price was reasonable and it attracted several dozen Mennonite families who were either recent immigrants from the Soviet Union or prairie farmers who wanted to overcome the drought and failures of the Great Depression. They sought to form a compact and exclusive Mennonite settlement similar to what they had known in Imperial Russia. These Mennonites included Mennonite Brethren and Conference of Mennonites in Canada members.

Thought the mild climate was encouraging, land clearing was difficult for logging had left behind massive tree stumps and mountains of debris. Once the land was cleared, the soil proved less fertile than hoped. This forced the men to find means of earning a living in addition to farming, and often required them to be away from their families. Being on an island brought a sense of isolation from the larger Mennonite communities in the Fraser Valley and the Prairie Provinces, and their continued use of the German language in the first three decades sometimes created a barrier with their non-Mennonite neighbors. Unfortunately these difficulties led some families to leave.

Land for a building site was donated by a Mr. Goertzen and Henry Falk, and a five-dollar per member levy also helped cover costs. The building was dedicated December 1937, and with a 150 seating capacity, served the church until 1953. At this time a new structure, seating about 200 people, was built almost entirely with volunteer labor. The new building was dedicated 11 April 1954 with J. F. Redekop and Johannes A. Harder as guest speakers.

In 1942 John A. Goerz responded to the call to serve as pastor. In addition to pastoral duties he led the Black Creek Bible School for several years and received a very modest salary for teaching in the winter months. In 1960, the congregation hired Johannes A. Harder as its first paid pastor. Harder served the church for three years, helping it through a difficult transition to English-language services.

A foyer section with additional Sunday school classes was added in the summer of 1966, and, in 1973, a two storey educational wing was added.

In 2014 the congregation changed its name to Black Creek Community Church.