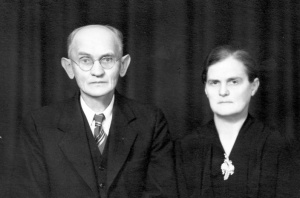 Johann (John) A. Goerz: teacher and minister; born 29 March 1883 in Orloff, Molotchna Mennonite settlement, Russia to Abram (1840-1911) and Agnes Goerz. He was the youngest child in a family of four sons and three daughters. On 19 August 1912 he married Helena Regehr (11 April 1891-8 July 1985) of Blumenort, Molotchna Colony, daughter of Johann and Katarina Regehr. John and Helena had five sons and four daughters. Johann died 10 May 1957 in Black Creek, British Columbia.

Johann's father Abram was an elder in the Orloff Mennonite Church and the representative to the Russian Duma during the time of Tsar Nicholas II. Johann was educated at the Orloff Zentralschule and the teachers' training college in Kharkov. He taught in several schools in the Ukraine, including Hochfeld, Spat, Blumenort, Waldheim and Hierschau. Although both Johann and Helena had their spiritual roots in the Mennonite Church, in 1923 they were baptized upon confession of their faith and joined the Waldheim Mennonite Brethren Church in Molotschna.

In 1925 Johann and his family immigrated to Canada, assisted by financial help of relatives in America. The family eventually settled in Dalmeny, Saskatchewan in 1928. Here Johann taught at the Tabor Bible School for thirteen years. He also taught one year at the Menno Bible Institute in Didsbury, Alberta.

While in Didsbury, Johann Goerz received a call to become pastor at the Black Creek Mennonite Brethren Church on Vancouver Island. Very soon after settling in this small community with Helena and their three youngest daughters in 1942, Johann was invited to start a Bible school. Students from both General Conference and Mennonite Brethren churches enrolled. The Black Creek Bible School continued for three years.

Goertz's students recall him as a demanding but very organized, well-prepared teacher with a love for story telling. Although Goerz lectured extensively, he did not require his students to write any examinations but did insist on a heavy dose of Scripture memorization. Goerz exhibited his love for teaching by also conducting German Saturday School classes for children. Bible lessons, grammar and Gothic script were emphasized. Being musically talented, he also organized a choir that served the local community.

Johann's gift for storytelling was also exhibited in the local church. Sunday evening services were well attended as he narrated Old and New Testament stories. He also assisted post-war refugees by offering private tutoring for those eager to learn English. Although Johann never preached in the English language, he was an avid reader in both German and English.

To supplement his small income as a pastor, Johann and Helena purchased a small farm where they raised livestock and planted an acre of raspberries.

Johann was a scholar at heart and had a passion for Bible study. He and Helena were hosts to many missionaries, visiting preachers and teachers. C. C. Peters, Jacob G. Thiessen, Jacob Reimer, and Abraham H. Unruh were colleagues with whom he shared his faith, his concerns for the church and his political views. Johann took every opportunity to travel to the Fraser Valley to preach or attend conferences.

Goertz was hearing-impaired. It was not his privilege to ever own or drive a vehicle. He had a distinctive walk, with his hands clasped behind him in a determined stride.

Johann's dedication to his teaching and preaching ministry and his love for family left a profound mark on all who came to know and respect him. He was a servant of God.