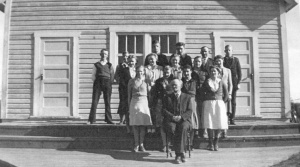 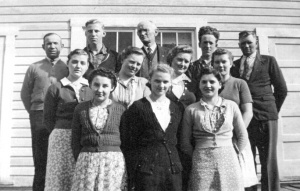 Mennonites first began arriving in Black Creek, a small community on the east side of Vancouver Island, in the early 1930s. By the end of the decade both the Conference of Mennonites (GCM) and Mennonite Brethren (MB) had built meeting houses. Congregational life and structure developed rapidly. The minutes of the Black Creek MB church record that on 8 September 1942 the congregation decided to organize and support a Bible school which would operate for five months of the year.

The idea of such a training center was not new to this emerging immigrant community. N. N. Friesen, a gifted preacher and evangelist who had moved to Black Creek in 1939, in addition to his duties as pastor, commenced a winter Bible school program in the GC church which lasted for two years. The vision for a Bible training center was also shared by the Mennonite Brethren. With the arrival of Rev. J. A. Goerz, they were ready to put their plan into action.

Johann Goerz had completed his secondary school training at the Orloff Zentralschule, and teacher training in Kharkov. In addition to the experience of teaching in several Russian Mennonite schools, he had served 13 years as the principal instructor in Dalmeny, Saskatchewan (Tabor Bible School) and one year in Didsbury, Alberta by the time he arrived in Black Creek. His students recall him as a demanding but very organized, well-prepared teacher with a love for story telling. Although Goerz lectured extensively, he did not require his students to write any examinations but did insist on a heavy dose of Scripture memorization. Being musically talented, he also organized a choir which served the local community.

The 1940s were not prosperous years for Black Creek Mennonites. Consequently it is not surprising that the tuition fees as well as the teacher's salaries were modest. In 1943 the church budgeted $500.00 for the annual operation of its school with the teacher's salary being set at $30.00 per month. The tuition fees, which initially were established at $15.00 per student, rose to $20.00 by 1946.

The school offered a two-year program and operated only during the winter months. According to the church minutes of 24 September 1946, classes were to begin the last week of October and continue to the end of May. Courses included Old and New Testament surveys, church history, music rudiments, child study and ethics. However, by 1947 the school seemed to be losing ground. By now instruction was reduced to three evenings a week (Minutes, 28 October, 1947). That same year the minutes record the rather sad resolve that the closing of the school would be left to the discretion of the teacher and the students.

Although the attendance seems never to have surpassed 15 students in any given year, the Black Creek Bible School left its mark on the community. For many students this school offered the only feasible opportunity for post-elementary school education. Through this school and the gifted, imaginative tutelage of J. A. Goerz, the young people of this community deepened their knowledge of the Bible as preparation for subsequent Christian ministries. For some students, the desire for learning which was kindled in the Black Creek Bible school was the incentive for further studies elsewhere. Not insignificantly, in drawing students from both MB and GC church background, the school symbolized a unity between the two denominations, which was also frequently evidenced in other ways in Black Creek.