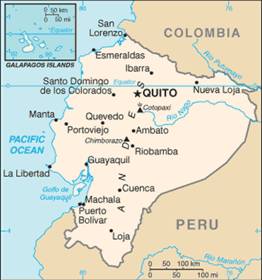 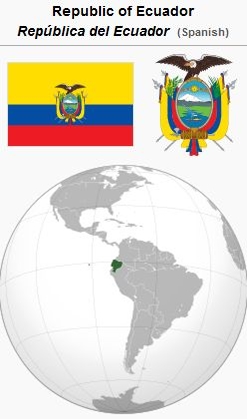 The Republic of Ecuador is located in South America, bordered by Colombia on the north, Peru on the east and south, and by the Pacific Ocean to the west. The country also includes the Galápagos Islands in the Pacific, about 1,000 kilometers (620 mi) west of the mainland.

Ecuador straddles the equator, from which it takes its name, and has an area of 283,561 km2 (109,415 square miles). Its capital city is Quito and the country's largest city is

Approximately 95% of Ecuadorians are Roman Catholic and 4% are Protestants. In the rural parts of Ecuador, indigenous beliefs and Catholicism are sometimes syncretized.

Elam Stauffer, a former missionary in Nicaragua, started the Misión Evangélica Menonita en Ecuador in 1980 in the city of Guayaquil under the auspices of the Rosedale Mennonite Missions (Conservative Mennonite Board of Missions and Charities) of Ohio. In 1987 the Iglesia Evangélica Menonita Ecuatoriana was formed. The mission also has a ministry to drug addicts and students. The mission helped flood victims in the city of Manta in 1983. As a result a congregation was born. In 1987 it had 60 members and more than 125 people attending. A preventive health program and a student center are additional ministries of the mission in Manta.

The German Language Service of Radio Station HCJB, also called The Voice of the Andes, in Quito was begun in 1953 by Canadian missionaries David and Anne Nightingale. They were sent out and supported by the Mennonite Brethren Board of Missions which staffed and supported the German service of HCJB for the first 30 years. In 1987 HCJB broadcast seven half-hour programs daily on short wave in German to Europe and the southern part of South America. The content of the broadcasts is biblical, evangelistic, cultural and informative. More than 14,500 responses came from German-speaking listeners in 1986. -- Sally Schroeder Isaak

In 2020 the following Anabaptist groups were active in Ecuador:

Material on the German HCJB Language Service is available in the Mennonite Brethren archives at the Hiebert Library, Fresno Pacific University, Fresno, CA.