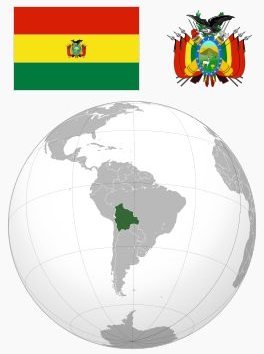 The Plurinational State of Bolivia, a republic located in central South America, has an area of 1,098,581 km2 (424,163 square miles) and an estimated population in 2012 of 10,389,913. It is bordered by Brazil to the north and east, Paraguay and Argentina to the south, and Chile and Peru to the west.

The Andrean region of what is now Bolivia was originally a part of the Inca Empire before it was conquered by the Spanish between 1524 and 1533. Bolivia became independent in 1825 and was named after Simón Bolívar.

Ethnically, the Amerindian or Indigenous population is at 60% while the remaining 26% are mestizo (mixed Amerindian and white) and around 14% are white. Amerindians include the Aymaras, Quechuas, Guaraní, and Moxos. Whites are mostly descendants of immigrants from Germany, Croatia, Spain, Italy, Lebanon and Turkey. There is also a small population of Afro Bolivians, descendants of African slaves, and Asians.

In Bolivia a Mennonite settlement of 37 families was established 1954-1957 in the neighborhood of the city of Santa Cruz (pop. 143,600), in the fertile plain east of the Andes Mountains, by emigrants from the Paraguayan Chaco. Twelve families came partly (all five colonies were represented) from Fernheim Colony, the first six families arriving in 1954 and founding the colony Tres Palmas, 15 miles (25 km) northeast of Santa Cruz. The second group of 25 families, who settled three miles (five km) beyond Tres Palmas, were conservative families from Menno Colony. The first group came primarily for economic reasons. Nikolai Kröker serves as minister for both groups, although the former adhered to the General Conference Church, and the latter to the Chortitz Church; neither group was organized. The Bolivian government guaranteed to the Mennonites freedom of religion, exemption from military service, and the privilege of private schools. All such settlers were promised liberal credit from the government. The 1959 total population was 189. -- Harold S. Bender

Most Mennonites came to Bolivia with more experience in colonizing than in similar ventures elsewhere. Some had sufficient money to purchase machinery helpful in carving a settlement out of the forest. Rainfall and temperature are especially favorable for soya beans, corn, and wheat, with Mennonites growing some 75 percent of Bolivia's soya crop in the Santa Cruz region, as well as producing a large percentage of Bolivia's cheese. Economic conditions worsened markedly in the mid-1980s. With the exception of a few small cheese cooperatives, Mennonites in Bolivia have not organized credit unions or colony-wide economic cooperatives, as is customary in many Latin American Mennonite colonies. Each group has, however, established a Waisenamt (orphan 's agency) to take care of widows and orphans. In some colonies organized mutual aid provides a type of storm and fire insurance.

Colony Mennonites in Bolivia have largely maintained an attitude of social distance from non-Mennonite Bolivians. One index of acculturation is the growing use of the host country's language, Spanish, especially to negotiate business. (Old Colony schools do not teach Spanish.). Children attend school about six months each year to the age of 12 (girls) or 14 (boys). Instruction is in high German, which is not used outside of church and school. There are no Bible schools. Church and colony leadership plan no specific youth activities and no sports are allowed. Church life remains a predictable, traditional source of deep strength and character for many. Social problems such as alcohol and drug abuse are not unknown. Church discipline is administered through the ban and excommunication, as well as corporal punishment in some instances. Health-care expense is an increasing concern for colony Mennonites. Both well-trained physicians and more informally trained practitioners of folk medicine are consulted. Marriages occur within the colonies; the consequences of genetic inbreeding have not yet been studied. 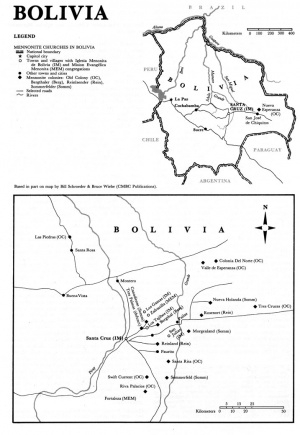 Bergthal (Sommerfeld) and have lived in Bolivia for 30 years. Some signs of an exodus from Bolivia are apparent. The original colony, Tres Palmas, disbanded in 1985; Reinland colony is in decline. Some Old Colony Mennonites moved to Argentina and began the Remeco-Guatrache Colony there. Colony Mennonites have been challenged by difficult conditions to respond nonresistantly to violence and attacks on property. In spite of problems and an uncertain future, most Mennonites are content to live in Bolivia. The country has been good to them; they have been good for Bolivia. Bolivia has its own unique history—how the colonists will fare in that continuing history depends on their willingness and ability to relate to the larger Bolivian society. -- Menno Ediger / Isbrand Hiebert

Mennonite Central Committee (MCC) began work in Bolivia in 1960 in response to a request from the Mennonite colonies to assist in agriculture and health. A clinic constructed in the Tres Palmas colony operated until 1970. During the 1960s the program grew by loaning volunteers to other church agencies.

In 1968-1970, a rural-based, integrated development program involving village public health care, education, and agriculture development began in the Santa Cruz region and in the San Julian region (the latter in cooperation with the Methodists, Maryknoll missioners, and the Bolivian government). A farm located on the southwest outskirts of Santa Cruz has served since 1972 as a base for crop experimentation, appropriate technology shop, animal traction experimentation, and Heifer Project International (HPI) animal holding grounds. The farm also has facilities for week-long workshops, seminars, and retreats for a variety of organizations, including the two organized Spanish-speaking Mennonite groups.

In 1976 a conscientious effort to build relationships with the Mennonite colonies was augmented with the appointment of workers specifically for this task. MCC workers have also carried out a tuberculosis program (1975-80); promoted well drilling with hand equipment and placement of HPI animals; conducted nonformal education and a village teachers training program; distributed material aid; and organized disaster relief efforts.

Training materials developed by MCC for preventive health care workers and an orientation program for village colonists coming to the tropics from various parts of Bolivia were adopted by the Bolivian government in 1977 and 1976, respectively.

MCC volunteers have been instrumental in the formation of the Iglesia Menonita de Bolivia since its beginning. In many other communities MCC workers have strengthened struggling Baptist, Assemblies of God, Plymouth Brethren, and other congregations instead of attempting to start competing Mennonite congregations. In some settings dynamic Roman Catholic Bible study groups have also been supported. More than 300 North American and South American volunteers have served in more than 100 Bolivian communities, 1960-85, making it the largest MCC program in any country over that period—in terms of total volunteers.

Mennonite Economic Development Associates (MEDA) first became active in Bolivia in the early 1970s through MCC. After several smaller loans, including several to Mennonite colonists, in 1974 MEDA loaned $25,000 to La Merced Cooperative, the largest savings and loan cooperative in Santa Cruz. These funds were for small farmers from MCC-related villages who previously had been unable to obtain credit. The first MEDA overseas country director in any country was placed in Bolivia in 1976. MEDA seeks out funding for suitable projects; teaches economic, bookkeeping, and accounting principles on an individual and short course basis; promotes production-oriented cooperatives; gives economic counsel and supervision; and provides funds for small loans. MEDA works closely, although not exclusively, with MCC and has seen it-self as the "economic development arm of MCC in Bolivia." -- Gerald Mumaw

Beginning in the 1980s, Bolivia became the preferred Latin American destination for German-speaking conservative Mennonites. From 1980 to 2007 a total of 53 new colonies were established in the provinces of Pando, Beni and Santa Cruz. These new colonies originated mostly from the internal division of other Mennonite colonies in Bolivia itself, but settlers also came from Belize, Paraguay, Mexico, Argentina and Canada. In 2007 there were 30,618 members (adults and children) in these new colonies.

During these decades the two Spanish-speaking conferences also continued to grow and to develop deeper Anabaptist commitments, demonstrating in the Bolivian context that Anabaptist Mennonites were not a cultural community, but rather a church community with a distinct theological identity. -- Jaime Prieto Valladares

In 2020 the following Anabaptist groups were active in Bolivia: