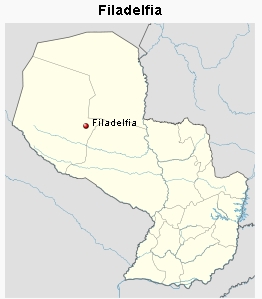 Filadelfia is located in the Colony Fernheim of the Paraguayan Chaco that was founded in 1931 (coordinates: 22° 21′ 0″ S, 60° 2′ 0″ W). Upon arrival of the Fernheim Colony group in 1930 they decided to concentrate their common undertakings, such as hospital, schools, industry, and printing press at one site centrally located, from where the colony would also be administered. In July 1931 a committee was appointed to determine the geographical center of the colony, and on 26 August 1931, a camp was selected as the future site of the town. A site about 2 ½ x 2 ¼ miles (4 x 3.85 kilometers) was staked off for this purpose. A study commission recommended that the town plan be drawn in four circles, the first of which would contain 240 building lots, the second 300, the third 440, and the fourth 530, totaling 1,510 building lots of 1.8 acres (three-quarters hectare) each. Because of the help of European and North American brotherhoods to make the settlement possible, and because it was to be the center of all co-operative undertakings, it was decided to call the town Filadelfia, meaning "brotherly love." The names of the principal streets are Asuncion Street, Bender Street, Cemetery Street, Lengua Street, Miller Street, Menno Street, Market Street, Russia Street, Main Street, and Unruh Street. The first four families to settle in the new town by 1932 were Gerhard Isaak, administrator of the hospital; David Neufeld, warehouse manager; Johann Funk, warehouse bookkeeper; Peter Boldt, cafe owner. The first school was opened in 1934. Filadelfia in 1955 was the center of the Chaco settlements--Menno, Neuland, and Fernheim, as well as being Fernheim's administrative center, with industries such as a cotton gin, oil expeller, furniture plant, creamery, essential oil extract plant, blacksmith shop, printing press where the biweekly paper Menno-Blatt was published, airport, hospital, dentist, telephone switchboard, all of which served not only Fernheim but all Chaco Mennonites. It had one Mennonite Brethren church and one Mennonite church; one cooperative and two private stores; two public schools and one high school and normal school; the Chulupi Indian mission and the Chaco MCC workers' home. Because of its greater conveniences as electric light, nearness to shopping center, and others, many retired farmers began moving to Filadelfia. Its population in 1950 was 546; in 1954 it was about 700.

Filadelfia has been the administrative center of Fernheim Colony since 1931. It is disproportionately large, with 1,700 Mennonite inhabitants out of a total 1987 population of 3,300 in the colony. An additional 200 non-Mennonites and more than 1,000 Indians also lived there.

The reasons for the rapid growth of the town lay in the location of all necessary services there, e.g., schools, hospitals, cooperative store, industry. Many private enterprises have also located there. The teacher-training institute, the sanitarium Hoffnungsheim (Home of Hope), the office for the administration of Indian affairs, Radio ZP-30, and governmental organizations like SENALFA (an agricultural consulting office), and ANTELCO (the telephone and television service of the Paraguayan government), are also located in Filadelfia.

The spiritual life of the colony is also centered in Filadelfia and beyond. The three congregations in Fernheim Colony carry on their mission work Licht den Indianern from this center. A major airport is located there. The location of Filadelfia between Menno and Neuland colonies has contributed substantially to its life and dynamic.