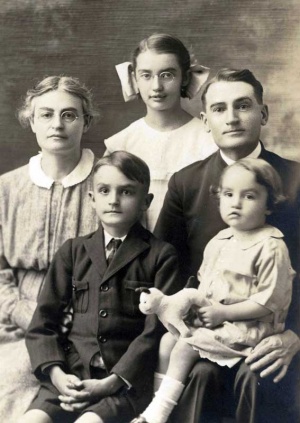 Identified by one historian as the father of Mennonite missions in Argentina, J. W. Shank was born 10 October 1881 at Versailles, Missouri, USA. He was a Mennonite Church (MC) missionary in Argentina for 33 years. Prior to J. W. and Emma Hershey Shank's arrival in 1917, he had carefully researched five South American countries and contacted 60 missionaries to decide where a Mennonite witness should be centered. He then solicited more than $20,000 for the mission cause.

J. W. loved to study literature; while awaiting coworkers, he taught in Nebraska and at Goshen College (from which he graduated in 1910). His hobby was writing; numerous articles gave North American Mennonite readers extensive information about how new Sunday schools were begun, peoples' characteristics, business and industry, and the Roman Catholic church in Argentina.

Active retirement years found J. W. in deputation work, as a pastor, recording history, teaching four years at Eastern Mennonite College, working as a handyman at the La Junta (Colorado, USA) center for retirees. He was privileged to return to Argentina for the 40th anniversary for Mennonite mission. He died on 17 May 1970 when living at Schowalter Villa, Hesston, Kansas.

Shank, J. W. and others. The Gospel under the Southern Cross. A History of the Argentine Mennonite Mission of South America Celebrating its 25th Anniversary 1917-1942. Scottdale: Mennonite Publishing House, 1943.