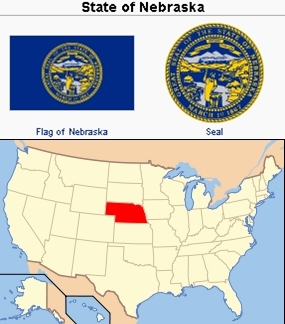 Nebraska, admitted to the Union as the 37th state in 1867. "Nebraska" is the Otoe Indian name for the Platte River, and means "flat water." It was first used by the French explorer Bourgmont in 1714. It was applied to the Platte watershed by John C. Freemont in 1841, and later to the state. It is near the center of the Great Plains region of North America, the eastern border formed by the Missouri River. Its dominant surface characteristic is its undulating prairie. The mean altitude is approximately 2,500 feet above sea level. The population of the state was 1,371,000 in 1952, 1,711,263 in 2000; its area is 77,227 sq. miles. It is predominantly a rural state; in the mid-1950s it had only 36 towns with more than 2,500. The chief natural resource is the rich soil of the loess region, a triangular area of approximately 42,000 square miles extending over the southeastern half of the state. The climate is characterized by rather light rainfall, low humidity, severe winters, hot summers, frequent changes in the weather, and considerable variation in rainfall and temperature from year to year. The average annual rainfall varies from 34 inches in the southeast to 16 inches in the west. Omaha (pop. 251,117 in 1986, 390,007 in 2000) is Nebraska's principal trading center, with livestock market receipts from more than twenty states. Other important trading centers are Lincoln (state capital, pop. 100,000 in 1986, 266,787 in 2000), Grand Island, Hastings, Scottsbluff, North Platte, Norfolk, Fremont, and Beatrice.

The first Mennonites to settle in Nebraska were a group of three Amish Mennonite families (MC) who came from the East and settled west of Milford in April 1873. In August 1874, 28 immigrant families from Russia under the leadership of Peter Jansen arrived in Beatrice and in September, under the leadership of Elder Jacob Buller, another group of Russians arrived in Lincoln. From this group 37 families (206 persons) settled in York and Hamilton counties near Henderson. From these three early settlements the largest Mennonite settlements of the state, Milford, Beatrice, and Henderson, have developed. With the exception of the Mennonite Brethren in Christ and Grace Bible Institute, the other Mennonite congregations in the 1950s over the state were part of the expansion programs of these three original settlements. 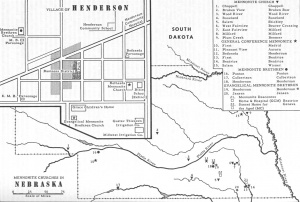 The United Missionary Church congregations in Nebraska resulted from an evangelistic movement occurring around the turn of the century. Seven congregations were established, all of which are small or have become extinct. The Grace Bible Institute of Omaha was organized in 1943 and serves as an inter-Mennonite school.

The Kleine Gemeinde of Jansen, founded by 36 families from Russia, became extinct with the removal of the group to Meade, Kansas in 1906-1908.

There have been several changes in the Mennonite Churches in Nebraska since 1950. Churches that had closed their doors for various reasons by 1987 were Salem, at Wisner (1957), and Roseland, at Roseland (1959). The Mennonite Church at Chapell merged with the Julesburg, Colorado, Mennonite Church in 1974. An Old Order Amish settlement established in 1978 at Pawnee City was dissolved in 1982 because of a conflict with authorities over certified teachers for the settlement's school. The Sunset Home for the Aged at Geneva closed its doors in 1981 after 30 years of service.