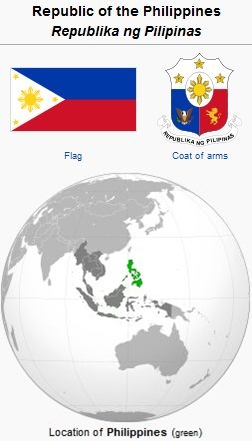 The Republic of the Philippines is a country located in Southeast Asia in the western Pacific Ocean. An archipelago comprising 7,107 islands, the Philippines is categorized broadly into three main geographical divisions: Luzon, Visayas, and Mindanao. Its capital city is Manila.

With a population of 88,574,614 people (2007 census), the Philippines is the world's 12th most populous country. Many ethnic groups and cultures are found throughout the islands. In prehistoric times, Negritos were some of the archipelago's earliest inhabitants. They were followed by successive waves of Austronesian peoples who brought with them influences from Malay, Hindu, and Islamic cultures. Trade introduced Chinese cultural influences.

The arrival of Ferdinand Magellan in 1521 marked the beginning of an era of Spanish interest and eventual dominance. Missionary work led to widespread Christianity. As the 19th century gave way to the 20th, there followed in quick succession the short-lived Philippine Revolution, the Spanish-American War, and the Philippine-American War. In the aftermath, the United States replaced Spain as the dominant power. Aside from the period of Japanese occupation, the United States retained sovereignty over the islands until the end of World War II when the Philippines gained independence.

Mennonites first began working officially in the Philippines after the country gained independence. By the end of 1946 the Mennonite Central Committee (MCC) had placed 17 workers in relief assistance to war victims. Their program soon focused on the province of Abra in north-central Luzon, whose capital (Bangued) had been destroyed by bombing. When MCC staff left in 1950, they had established a hospital in Bangued and a high school in the isolated mountain village of Lamau. Both have been operated and expanded by local Christians in the years since then.

Twenty years later Eastern Mennonite Board of Missions and Charities Mennonite Church (EMBMC) responded to an invitation of a small independent group by transferring a family from their Vietnam staff. Mennonite Ministries was based in Quezon City with the objective of working in supportive roles to assist Filipino church groups. By 1972 substantial relationships had been formed with Missions Now, Inc. Through the years 1970-1987 EMBMC maintained a small staff to assist in leadership training through a Bible school opened in Lumban, and in economic development which has included some Mennonite Economic Development Associates (MEDA), MCC, and Ten Thousand Villages projects.

After visits by MCC leaders in 1975-1976, a decision was made to open a new work in the Philippines. This action responded to requests for personnel; it also allowed MCC to build on the leanings from Vietnam with a program shaped around peacemaking and justice concerns. In the years 1977-1987 a select team of experienced workers engaged in community and agricultural development, research, and writing. Their goal was to articulate and live out a theology of the cross in the midst of economic inequities and injustice.

This time the major effort was geared to the conflict with the Muslim populations in the southern island of Mindanao. From their basic stance of a ministry of presence, which emphasized a listening and reconciling role among oppressed peoples, the MCC staff worked with and channeled small amounts of resources through various Filipino groups with similar concerns. Other smaller programs related to political detainees and their families and to the "hospitality women" (prostitutes) who lived near the huge United States military bases.

In 1985 MCC reported having an ideal level of 10 persons for its program in the Philippines. The staff continued to be firmly committed to the way of nonviolent love in the midst of an increasingly polarized and bloody conflict. A significant part of the ministry was seen in the witness MCC workers and their Filipino co-workers were giving across North America through writing, speaking tours, and contacts with political leaders.

The approach taken in their work has had its problems. Not all supporters and church leaders in North America have understood or affirmed the stance of the team. And working with the people rather than for them could be quite frustrating, with results that were more difficult to measure or report. Yet the dramatic rise of "People Power," enabling the nonviolent replacement of the Marcos government with that of Corazon Aquino in 1986, suggested that MCC's objective has been well-tailored for the situation.

The Integrated Mennonite Churches (IMC) still conducted an annual general conference where all the leaders and members gather to fellowship and learn more about peace theology, Anabaptism and how to deal with challenges at the local and national level. Due to geographical and financial challenges, however, around 20 percent of the total membership has been able to attend the annual conference. Only those who are in close proximity to the venue of the gathering can usually come because of the cost of traveling.

The IMC youth gathered every year for a youth camp, where young leaders encouraged and strengthened each other. It was also an avenue to invite young people to come to know Jesus and have a relationship with him. Youth camps re-energized young people to serve in their local churches and be active in fellowship and witness.

Aside from the IMC, there were other Mennonite denominations present in the Philippines, such as the Conservative groups from the Nationwide Fellowship Churches. There was also a Mennonite Brethren mission in the north. The Peace Church Network was planted by Mennonite Church Canada and established in Metro Manila, the capital of the country.

In 2020 the following Anabaptist denominations were located in the Philippines: