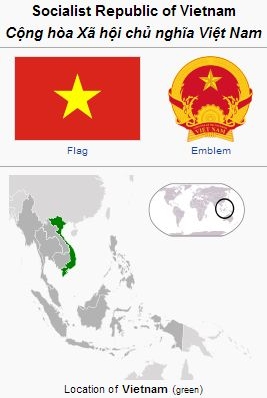 The Socialist Republic of Vietnam is the easternmost country on the Indochina Peninsula in Southeast Asia. The country is bordered by China to the north, Laos to the northwest, Cambodia to the southwest, and the South China Sea to the east. Vietnam's total area is 331,210 km2 (128,565 square miles) and had an estimated population in 2013 of 89,693,000, making it the 13th most populous country.

Vietnam became independent from Imperial China in AD 938 after a millennium of Chinese domination. Vietnam's independence was gradually eroded by France in the mid-19th century until the entire country came under French rule in 1884 and the country was formally integrated into French Indochina in 1887. Western-style education was developed, and Roman Catholicism grew. During World War II the country was occupied by Japanese forces and up to 2 million people died during the Vietnamese Famine of 1945.

The First Indochina War of 1946-1954 saw communist forces under the leadership of Ho Chi Minh fight for independence from France and the end of Japanese occupation. The Geneva Accords of 1954 established North and South Vietnam. In the following year almost one million northerners, mainly Roman Catholics, moved to the south. The Vietnam War soon followed when pro-communist forces began a guerrilla campaign in the south. US forces became involved in ground combat operations in 1965 to support South Vietnam, while China and the Soviet Union provided North Vietnam with military support. The capital of South Vietnam, Saigon, fell in April 1975 and the two countries were merged on 2 July 1976.

After the establishment of the Socialist Republic of Vietnam, a mass campaign of collectivization of farms and factories insued. At least one million South Vietnamese were sent to reeducation camps and thousands were executed. In the late 1970s and early 1980s, millions fled the country in crudely built boats, creating an international humanitarian crisis.

For most of Vietnam's history, Mahayana Buddhism, Taoism, and Confucianism were the dominant religions. According to the General Statistics Office of Vietnam's report for 1 April 2009, 6.8 million (or 7.9% of the total population) are practicing Buddhists, 5.7 million (6.6%) are Catholics, 1.4 million (1.7%) are adherents of Hòa Hảo, 0.8 million (0.9%) practise Cao Đài, and 0.7 million (0.9%) are Protestants. The largest Protestant churches are the Evangelical Church of Vietnam and the Montagnard Evangelical Church. Two-thirds of Vietnam's Protestants are reportedly members of ethnic minorities.

In 1957 two Mennonite agencies were working in this country. The Viet Nam Mennonite Mission (Mennonite Church) was founded by the Eastern Mennonite Board of Missions and Charities in 1957. James and Arlene Stauffer and Everett and Margaret Metzler began language study in Saigon in 1957. The Mennonite Central Committee opened relief work in Vietnam in 1954. The twelve relief workers on the field in 1957 were located at Banmethuot with the Leprosarie de Mission Evangélique and in Saigon (later Ho Chi Minh City). -- Melvin Gingerich

Mennonites began work in Vietnam in 1954, when France lost its Indochina colony and the United States supported a new government in Saigon (later Ho Chi Minh City). Mennonite Central Committee (MCC) aided refugees resettling in the south, but soon focused on medical and agricultural work in the central highlands. They staffed a leprosarium in Banmethuot (1955) and a hospital in Nhatrang (1960).

MCC worked closely with the Evangelical Church of Vietnam (ECVN), whose 50,000 members resulted from Christian and Missionary Alliance (CMA) missions since 1911. They also worked in student services and hosted several work camps. An early tragedy was the capture of Danny Gerber with other CMA staff in 1962, never to be heard of again. By 1964 the U.S. was directly involved in the fighting.

In 1965 MCC joined Church World Service and Lutheran World Relief to form Vietnam Christian Service (VNCS), a joint program administered by MCC at the others' request. This built on the good rapport MCC had created, but the pros and cons of such a large agency were often debated. MCC's work grew along with the engulfing war and the United States' entrenchment. By 1968, when the Tet Offensive brought the destruction to the cities, MCC staff had peaked at 42 and U.S. troops at a half million.

Under VNCS the program moved into community development with a range of social services. Use of the military for transportation and security for work in the provinces caused constant concern, producing repeated discussions with United States and Vietnamese officials to maintain a reconciliation stance in their civil strife. After seven years MCC left VNCS to work more closely with its own purposes and identify more with the suffering. By 1974 its main objective was defined as peace and reconciliation.

In the 20 years prior to the change of government in 1975, 117 persons served with MCC in Vietnam. The value of material aid and the costs of personnel and program totaled nearly $1.5 million (U.S.). Of this, $216,000 was given to war victims of "the other side" in both North and South.

The Eastern Mennonite Board of Missions and Charities responded to the invitation of MCC and ECVN by sending two missionary couples in 1957. They began the Vietnam Mennonite Mission (VNMM), which was not granted official registration until 1964 because of the strong Roman Catholic position of the Diem government. By then the staff had increased to 10, the average number in the country for the next decade.

Half of the mission staff were long-term teacher-evangelists and half were short-term associates. The question of how to relate to the ECVN remained central. Through the years the two agencies were able to keep an open, supportive association while developing a separate program and church group.

Missionaries developed various outreach programs, with two major projects. A large student center in Saigon reflected the opportunity to work with students everywhere. Through its English classes, reading room, and study facilities, the Mennonite Center became a popular place for thousands of students. Often biblical materials were used in the classes and public programs.

Community evangelism utilized a variety of services and programs, often carried out jointly with MCC. This was especially effective among resettled refugees in Gia Dinh, at the northern edge of Saigon. Here the clinics, sewing classes, day-care, primary school, family-child assistance, and the rebuilding of several hundred houses gave concrete expression to the gospel. This became the primary congregation for the 150 Vietnamese who identified themselves as Mennonite Christians by 1975.

Most Mennonites who served in Vietnam with both MCC and EMBMC saw their witness for peace as a major purpose of their presence. In friendships and in contacts with the government and the press they tried to share with the Vietnamese people their concern about United States policy. They also gave a significant witness back to North America in their writing and speaking. Several statements received wide distribution.

A less publicized witness for peace was the series of contacts with officials of North Vietnam and the Provisional Revolutionary Government of the South. Repeated visits were made to foreign capitals for such contacts, preparing the way for continued relationships and assistance following the war.

Four MCC workers were among the few foreigners who deliberately stayed for the transition period after 1 May 1975. Two of them, after their departure in 1976, wrote books about their experiences. Some MCC and EMBMC staff members have returned for official visits in the decades since. Emergency and medical aid have been given for specific projects, visited by staff members from Bangkok. The United States government has repeatedly denied permission for MCC (U.S.) to ship any aid to Vietnam; so this assistance has been given by MCC Canada, which also sells Ten Thousand Villages crafts from Vietnamese workers. -- James E. Metzler

In the years following the Vietnam War (1954-75) there were very few Mennonites in Vietnam. The approximately 100 Mennonites functioned mostly as "house churches." Beginning in 1997 the North American Vietnamese Mennonite Fellowship began work in Vietnam, helping to plant 200 churches in 10 years. The church grew to the point where, in July 2003, an organizing conference of 47 church leaders desiring to identify with the Mennonite church and confession of faith was held. They came together from five or six different house church networks without the benefit of legal status at that time. Pastor Nguyen Quang Trung was elected as president of this uniting church. Pastor Nguyen Hong Quang, leader of one of the larger house church networks forming the new church, was elected as vice-president and general secretary.

In the following years a number of church members were imprisoned, including Pastor Quang in 2004. During this time the government offered legal status to the Mennonite church, but Quang and a number of his followers refused to participate in the process. As a result, the larger church was divided into two groups.

On 15-17 November 2008, 188 Vietnam Mennonite Church delegates representing 6,123 members from 24 provinces met to celebrate and formalize legal status in the country. Legal status allowed the church to build houses of worship, establish training facilities, and partner with other denominations in joint projects as well as partner with Mennonite Central Committee in relief and community development work, with government approval. Trung was officially elected as president of the church. This new legal status, however, did not include Quang and his associates.

The non-recognized Mennonite church continued to operate during Quang’s imprisonment and after his release in 2005, organizing training and education programs for church leaders in that church as well as for other non-recognized evangelical house churches. This network of churches is very active in evangelism, children and youth work, women’s ministries, music, worship and other involvements. They also have a special commitment to a Christian scouting program. As does the recently legalized church, the non-recognized church has locations where they meet for worship and ministry. They are organized into a number of districts around the country and include many minority believers in addition to ethnic Vietnamese. -- Richard D. Thiessen

Martin, Luke S. "An Evaluation of a Generation of Mennonite Mission, Service and Peacemaking in Vietnam 1954-1976." Unpublished study sponsored by MCC and EMBMC, 1977.