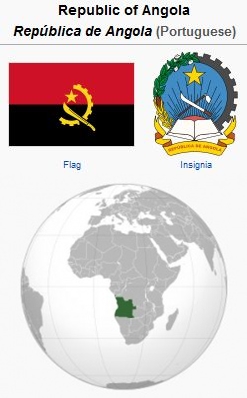 The Republic of Angola is located in south-central Africa, and is bordered by Namibia to the south, Democratic Republic of Congo to the north, Zambia to the east, and the Atlantic Ocean to the west. Total area is 1,246,700 km2 (481,354 sq. mi.) and the estimated population in 2009 was 18,498,000. Angola was a Portuguese colony from the 16th century until 1975. After independence, the country suffered from a civil war until 2002. The population is composed of Ovimbundu (37%), Ambundu (25%), Bakongo (13%), mestiços (mixed European and African) (2%), European (1%), and other ethnic groups (22%). It is estimated that over half of the population is Roman Catholic and a quarter are Protestant.

Upon their return to Angola, many Mennonites were persecuted by the Angolan government due to the similarity in the sound of "Mennonita" and UNITA, a rebel movement in the country. The persecution included the destruction of churches and the dispersal of many church members into the forest. After a meeting with government and church officials, the misunderstanding was cleared up.

Between 1990 and 2020 the following Anabaptist groups were active in Angola: