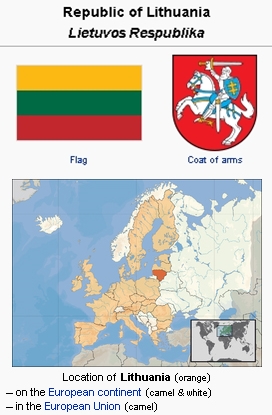 The Republic of Lithuania is the largest of the three Baltic States. It is situated along the southeastern shore of the Baltic Sea, to the east of Sweden and Denmark. It borders Latvia to the north, Belarus to the east and south, Poland to the south, and Kaliningrad Oblast (a Russian exclave) to the southwest. The total area of the country is 65,300 km2 (25,212 square miles) and in 2014 it had an estimated population of 2,944,459.

The territory that is now Lithuania was initially inhabited by various Baltic tribes. They were united in the 1230s by Mindaugas, who was crowned King of Lithuania in 1253. By the end of the 14th century, Lithuania was one of the largest countries in Europe and included present-day Belarus, Ukraine, and parts of Poland and Russia. After close cooperation between Lithuania and Poland throughout the 14th, 15th, and 16th centuries, the Polish-Lithuanian Commonwealth was created in 1569. Eventually, foreign powers, especially Russia, came to dominate the Commonwealth, and it was partitioned between Russia, Prussia, and Austria between 1772 and 1795. Most of Lithuania became part of the Russian Empire.

Lithuania declared its independence on 16 February 1918 near the end of World War I. However, the Vilnius Region was seized by Poland in 1920 and the Klaipėda Region was ceded to Germany in 1939. During the tumultuos years of World War II the Soviet Union occupied and annexed Lithuania in June 1940, Nazi Germany occupied the country from 1941 to 1944, and the Soviet Union re-annexed Lithuania in 1944. The Lithuanian Soviet Socialist Republic was established in 1945 and the majority of German residents in the area fled the country in the closing months of the war.

On 11 March 1990 Lithuania became the first Soviet republic to declare its independence and joined the United Nations in September 1991.

Lithuanians officially adopted Christianity in 1387, and was the last pagan nation in Europe. However, pagan customs prevailed for several centuries. In 2011, the following religious groups were counted: Roman Catholic, 77%; Orthodox, 4%; Old Believers, 0.8%; Evangelical Lutherans, 0.6%; Evangelical Reformists, 0.2%; and other religions, 0.8%. 6% stated that they had no religion, while 10% did not specify a religion.

Lithuania is the name of the district of East Prussia which was called "Gumbinnen" from 1918 on. In its northern part, near Tilsit, Mennonites had been living since 1711, known until 1925 as the Lithuanian congregation, later as Memelniederung. Its varied fate has been sketched in the article Gumbinnen; its inner history shall be considered here.

The Swiss Mennonite families who had been expelled from the canton of Bern and who settled in the village Jedwilleiten in 1711 must have without exception moved away in the following years, for by 1723 there was no trace left of them (contrary to the view expressed in the pertinent literature, W. Mannhardt, Die Wehrfreiheit, 116; E. Randt, 8 f.). Even the rental contracts made out with the Swiss Brethren have been lost or never existed. Furthermore all the Mennonite settlers of the village of Jedwilleiten about 1723 were of West Prussian origin, as their names clearly show: Tobias Barthel, Jacob Janson, Johann Schröder, Peter and Hans Quapp, Heinrich and Peter Jansen, and Peter Rhod.

The West Prussian Mennonites who settled here after 1713 stem almost exclusively from the congregations of Montau, Schönsee, and Thorn; they suffered very severely in their home country of the plague, war, and special taxes, and were compelled to emigrate. On the basis of a guarantee of freedom of conscience and exemption from military service given by the King of Prussia, they traveled by the more comfortable sea route to their new home in the Kukernese area, very close to the supposed (or short‑lived) Swiss settlement. They did much toward draining this piece of the countryside.

Their stress upon a moral way of life attracted many persons to them from other creeds. A series of transfers of membership occurred, especially of servants who had moved to Lithuania with the Mennonite farmers and who were repelled by the excessive drinking among the members of their faith. This is the only Mennonite church in East and West Prussia in which a considerable number of such transfers took place.

This thriving congregation was granted only 11 years of peaceful existence. In 1724 the king's recruiting officers forcibly broke into the Mennonite homes. To their protests the king replied with the order that they leave the country. And so the 160 Mennonite families moved back into the Werder. Their homes, some of them newly built, had to be abandoned in haste and sold below their value. For their labor in building dikes and ditches they were remunerated by the government. Though the conditions of the sale were just enough, the loss of their new home was painful. Relatives and brethren in the Werder offered them a place to stay, especially in the Thiensdorf church, where each owner of a "hide" of land obligated himself to take in a family and furnish pasture for two cows; but there were no funds to make a new settlement in Polish Prussia. As in all times of need, the Dutch brethren were appealed to for aid.

The refugees acquired 88 hides of land by sale and lease in several localities: in Dierungshof, two miles from Elbing and two miles from Marienburg; in Rudnerweide opposite Mewe; in Klein-Montau, one and one-half miles from Marienburg; in Kamincke, one mile from Marienburg. About 90 families settled in these places. About 24 well-to-do refugee families had already bought land in the Werders and in Schönsee and Montau. There were about 40 destitute families left. These families were offered a favorable opportunity to return to Lithuania, to settle on the Rautenburg estates of Count von Waldburg. Two Mennonite families were already living there, who called them and soon had a total of 47 families together. Although all of them were without funds, they began to drain the land, dig ditches, build houses, and even erected a mill.

Again a Mennonite colony was taking form—they called themselves the Dannenberg church—when the king's command to leave the land unexpectedly struck them. He preferred the Salzburg refugees who would bear arms. All the objections of the count and of the Ministry of War, pointing out the extraordinary capability of the Mennonites, were of no avail. The Mennonites had to leave at once or be liable to "cart punishment"—to be taken to the fortification in a cart; so they left the country that had for six years again been their home.

The Dutch did not welcome this immigration. Their fears were realized. The Lithuanian families —110 persons arrived at Amsterdam after a stormy voyage of three months' duration— were settled in Wageningen and Walcheren at great expense (the offering amounted to 65,000 florins). But after three years there was trouble. It was probably good for both sides that the colonists of Wageningen betook themselves homeward by sea in 1736. The Walcheren settlers followed the next few years.

At the beginning of the reign of Frederick the Great in 1740, West Prussian Mennonites again went to Lithuania, namely, 60 families from the Elbing region. They were joined by some returning from Holland. Although this settlement had to be abandoned on account of the frequent floods, the "Mennonite dam" is evidence of their colonizing work. They were followed in 1758 by 12 Mennonite families who settled in Plauschwarren (on the right bank of the Memel). Gradually more settled.

By 1776 the Lithuanian church numbered 387 souls, and with some variations maintained this number to World War II. The first Dutch Naamlijst to mention the congregation of Lithuania is that of 1743. The congregation was then said to belong to the Waterlanders, which may also mean Frisians. The elders were Adrian Sievert and Hans Vooth (Foth), and preachers Hendrik Dirksz and Hendrik Casper. Later Naamlijsten name as preachers Salomon Kohnert 1743-ca.1795, Andries Ewert from at least 1750-ca.1760, Hendrik Janzen 1754 (elder in 1769-1794, Abraham Gerzen 1762-ca.1775, Jan Rosenfeldt 1762-1774, Dirk Jantzen 1769-? (elder 1791), Steffen Baltzer 1771-ca.1790, Heinrich Roosenvelt 1774-?, Peter Janzen 1787-?, Jacob Evert 1792-?, Franz Janzen 1793-?, and Abraham Rosenfeldt 1799-?. Many of the names on the oldest extant membership list (1774) are those of the settlers of 1713-1732, of whom many returned: Ewert, Eckert, Ediger, Gertzen, Ketler, Krause, Kreyger, Lucht, Pauls, Penner, Schmidt, Szepanske, Vodt. Some of the names later disappeared; those who remained to the end are Ewert, Voth, Götzke, Janz, Rosenfeld, Göritz, Hübert, Mertins, Scheffler, Wohlgemuth (the first six names indicate origin in the Graudenz marsh).

This vanishing of names is largely explained by their adherence to nonresistance. The amount of land free of military duty granted to the 64 Mennonites was fixed and could not be exceeded; young people who bought other land obligating them to military service were put out of church. The Mennonites who accepted military service tried unsuccessfully to form an organization of their own in 1855. Thus they were lost to the church. This changed in 1868 when service in the medical and transport corps was permitted, and at the same time the restriction on land ownership was removed. But though the church had always been very strict on nonresistance, during World War I only three or four members took advantage even of the non-combatant service privilege. The government lamented the emigration of so many capable and well- to-do persons. An opinion of the Oberpräsidium of Königsberg in 1842 says, "The outward and moral conduct of the Mennonites ... is exemplary. Their intellectual training is in general higher than that of the other inhabitants. Their energy and intelligence is conspicuously above that of the other inhabitants. . . . They maintain friendly intercourse with their neighbors, but never take part in the disorders occurring frequently in the lowland. . . . In this way they have had the greatest and most salutary influence directly and by example on the moral and nutritional state as well as on the culture and civilization of their neighbors."

The first little meetinghouse was built in 1767 in Plauschwarren; 120 years later it was completely rebuilt, but in ten years, 1893, it was sold and turned into a dwelling because most of the Mennonites had moved away from Plauschwarren. For most of the members Plauschwarren was too far away, and so they built a chapel on the estate of Grigolienen. It was soon too small, and in 1831 the manor house of Adlig Pokraken was remodeled to serve as a church, arid the Gemeinde Kalendar 1926-1927 lists the congregation by this name.

In the 1970s ethnic German emigrants from the Soviet Union began settling in Lithuania and formed small congregations. Eventually Lithuanians joined the congregations as well. The congregations were influenced by Baptist theology but deliberately chose to not formally identify with the Baptist name. In 1991 the Lithuania Christian Fund College (now called Lithuania LCC International University in Klaipeda) was established by Art DeFehr of Winnipeg, Manitoba, Otonas Balčiūnas of Lithuania, and Johannes Reimer of Germany. The presence of this Christian liberal arts university in the country had a positive influence on the small Lithuanian group of Baptist-minded believers. The congregations received spiritual development training and suport from Mennonite families at the college as well as through MB Mission, Eastern Mennonite Missions, Mennonite churches in Germany, and many individuals from Canada and the United States. The congregations joined together to form the Laisvųjų krikščionių bažnyčia (Free Christian Church) in 2003. The group joined the International Community of Mennonite Brethren (ICOMB) in May 2014.

In 2012 the denomination had seven churches in Alytus, Kaunas, Klaipėda, Panevezys, Šiauliai, Šilute and Vilnius with a total membership of approximately 200. -- Richard D. Thiessen

In 2020 the following Anabaptist denomination was present in Lithuania: