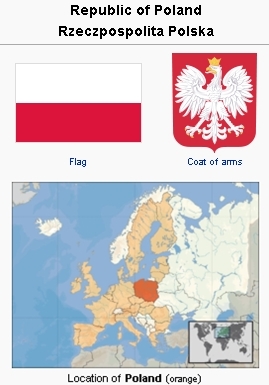 Poland, located between Germany and Russia, has undergone many changes in its history as a "buffer state" and played a significant role in the history of the Mennonites who moved eastward from the Netherlands and South Germany. West and East Prussia were added to Poland in 1466 under the Jagellon dynasty (1386-1572) in a conflict with the Teutonic Knights. After 1530, therefore, when the Mennonites started to come from the Low Countries to settle along the Vistula River, they settled in Polish territory. Both privileges permitting them to settle under certain conditions; and edicts prohibiting their settlement as "heretics" were issued in early times, primarily by Polish rulers. They were mostly valid only during the lifetime of a ruler. The Mennonites were tolerated only because some estate owners or officials derived benefits from them as expert farmers and drainers of the swampy areas along the Vistula River. In many instances they were unfairly exploited by government officials. After Willibald von Haxberg, the representative of the king of Poland, had unjustly exploited them, King John Casimir (1648-1668) issued two "privilegia," 16 July and 28 November 1650, which were renewals of a privilegium of 1642 and applied to the Mennonites of the Marienburg and Graudenz lowlands. The Mennonites and other Dutch immigrants became known as experts in various trades, particularly in draining swamps. Numerous favorable privileges and restricting edicts were issued in the following years. A special manner of settling, i.e., the pattern by which the "Hollanders" settled and rented their land, became known throughout Poland. 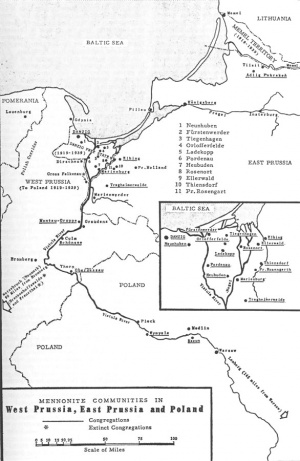 Starting in Danzig (Gdansk) around 1535 Mennonite settlers moved into the unoccupied areas along the Vistula River establishing "Hollander" villages in the triangle between Danzig and Elbing and Marienburg. Some of the areas were the Danzig Werder (i.e., marsh), Scharpau, Tiegenhof, Marienburg Werder, Heubuden, Herrenhagen, and Einlage.

As the land in this triangle became occupied the descendants and newcomers proceeded south along the Vistula River, establishing themselves in Schwetz, Graudenz, and Culm. From here they proceeded into the interior of Poland. During the late 18th century they established the Mennonite settlements of Deutsch-Kazun and Deutsch-Wymysle near Warsaw and farther southeast Michalin near Makhnovka, Karolswalde near Ostrog in Volhynia which meanwhile had become Russian Poland.

During the 18th century Swiss Mennonites and Amish from South Germany and Alsace-Lorraine settled near Lemberg in Galicia, which was ceded by Poland to Austria in 1772. In Volhynia such villages as Kutuzovka and Neumanovka were established. Most of these Swiss-Volhynian and Swiss-Galician Mennonites immigrated to the United States around 1874 (see also Volhynia).

Since the fate of Poland is so varied most of the Mennonite settlements shared in the same vicissitudes. The history is related in greater detail in the articles dealing with the individual provinces, settlements, and villages.

During the Reformation period Poland experienced its greatest expansion when its territories extended from the Baltic Sea to the Black Sea, including West and East Prussia, Galicia, Volhynia, and other parts of the Ukraine and Lithuania. Lithuania was lost in 1635 and parts of the Ukraine in 1667. During the first partition of Poland (1772) West Prussia, not including Danzig and Thorn, became a part of Prussia, and East Galicia of Austria. During the partitions of 1793 and 1795 other parts of Poland—Danzig, Thorn, Plock, and Warsaw—were added to Prussia, and Volhynia to Russia. The Volhynian and some other Mennonite settlements were in Russian Poland when the great migration of Mennonites to America took place in 1874.

After World War I Poland again became independent, and Danzig became a free city. Many of the Mennonite settlements were located in Polish territory or the Polish Corridor. At the beginning of World War II Germany and Russia divided Poland once more, and the Mennonite population in Russian-occupied Poland was transferred to the German part. After 1945 all of the areas in which Mennonites lived in Danzig, Prussia (except the Königsberg-Memel area, now Russian), and Poland belonged to Poland and were under Polish rule. The Mennonite population either fled from this territory during World War II or the German collapse in 1943-45 or they were evacuated or have fled since that time. No organized Mennonite community or church existed in 1957 along the Vistula River or any other part of Poland. Two women were known to be still living in Danzig and Elbing who survived because of intermarriage with Poles.

American Mennonites did relief work in Poland in 1940-1941 and 1947-1949. M. C. Lehman was in charge of the Mennonite Central Committee work in 1940-1941, when needy Poles and the Deutsch-Kazun Mennonites were helped. In 1947 relief work was resumed by the Mennonite Relief Committee and the MCC. In the Danzig area and in Nasielsk north of Warsaw some 245 tons of food and 31 tons of clothing were distributed in 1947-1948. In 1947 the MCC established a demonstration farm near Pelplin south of Danzig. At its peak this unit had 23 men. The MCC was also instrumental in helping some remaining Prussian, Polish, and Russian Mennonites to leave for Western Germany.

The relation of the Mennonites to the Poles and Poland, the attitude of the Polish rulers toward the Mennonites, and their contribution to the country have not been thoroughly investigated. Much of the source material was not accessible at this time or has been destroyed. Some of the church records have been rescued and are located in the Bethel College Historical Library, the Mennonite Research Center at Weierhof (Germany), and in private hands. In some instances the Mennonite communities were fertile soil for the Baptist movement, which entered Poland in the mid-19th century. Some Mennonites joined the Baptists and helped the spread of this movement, which ultimately reached not only the German Protestant churches, but also the Polish Catholic churches. Today the Polish Baptists are primarily Polish nationals, since the German population has fled or been evacuated from Poland. There is some evidence that intermarriages have taken place between the Mennonites and Poles since the early days of their settlement. In some instances, since it was forbidden to proselyte among non-Mennonites, Polish nationals went to Holland to become members of the Mennonite Church, and after their return married a Mennonite and transferred their membership to the local church. Some of the names which are still common among Mennonites which are likely of Polish origin are Dellesky, Ratzlaff, Rogalsky, Sawatzky, Schepanski, Tetzlaff, Tilitsky, and Utesch. Quiring (107) lists fifty words in the Low German language which are of Polish background. These are adaptations made by Mennonites while living in a Polish environment. -- Cornelius Krahn

Mennonite mission and service in Poland, a socialist yet predominantly Roman Catholic country, have developed in the period since the mid-1950s despite various obstacles. Decades of Polish-German antagonism have affected the views of Poles and Mennonites toward each other. The difficult course of East-West relations and Polish domestic turmoil also hampered the forming of stronger Mennonite ties to Poland. Nevertheless, a variety of formal and informal contacts developed, providing an ever-broadening framework for future activity.

The detente years of the 1970s ushered in the most intense period of program development by Mennonite institutions. In the field of educational and cultural exchange, Mennonite Central Committee (MCC) brought Polish farmers and young people to North America under the International Visitors' Exchange Program, while Goshen College sent and received students and faculty as part of the Study-Service Trimester (SST) program. MCC has also sponsored full-term volunteers who, through their capacities as teachers and students, worshiped with Polish Christians, talked with representatives of various sectors of Polish society, and, on occasion, helped administer relief aid. Peter Foth actively promoted broader European Mennonite contacts with Poland. In the years 1979 to 1983 MCC provided relief aid during the Polish economic crisis as well as disaster relief after flooding in the Plock region, where Mennonite colonies formerly existed.

The generally neglected story of the four centuries of Mennonite experience in Poland has drawn increasing attention from a small body of Polish historians as well as a new generation of Mennonite scholars. There is a growing Mennonite conviction of the need for a symbolic gesture of gratitude for the tolerance, refuge, and decades of privileges offered by successive Polish kings to the early Mennonites. In addition, the long shadow cast by the hostilities of the last centuries seems to be giving way to a more sympathetic understanding from both sides. -- Sam Myovich

Schreiber, William T. The Fate of the Prussian Mennonites. Gottingen, 1955.