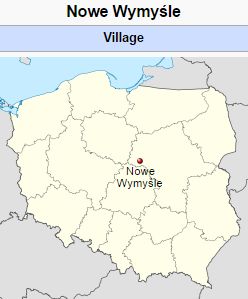 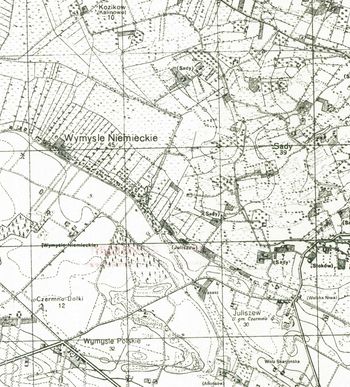 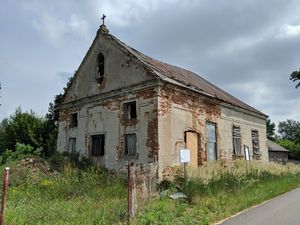 The former building of the Deutsch-Wymysle congregation.
R.D. Thiessen (July 2019).

In 1762 Mennonite emigrants from the West Prussian congregations of Przechovka near Schwetz and of Montau-Gruppe near Graudenz made their way upstream into Poland and settled in the province of Warsaw, district Gostynin, not far from the town of Gombin (Gabin), and founded the Deutsch-Wymysle village and congregation. In 1764 a second group arrived from Przechovka. In 1818-1820 and 1823-1824 a further considerable influx came from Przechovka and the Brenkenhoffswalde-Franztal congregation. Those who came in these last five years all joined the Deutsch-Wymysle congregation, although they settled for the most part in various villages in the adjacent German Vistula region, such as Piaski, Sordy, Korzykov, Vionczemin, Novosiadlo (Nowosiadlo), Sviniary (Swiniary), Leonor Lyck, Piotrkovek, Lady, Arciechov, Januszev and Sladov. Family names found among these immigrants were Balzer, Bartel, Block, Buller, Dirks, Dyck, Ediger, Ekkert, Frey, Funk, Geddert, Gerbrandt, Gertz, Görtz, Heier, Jantz, Kasper, Kliewer, Kraft, Kühn, Luther, Lyhrmann, Nachtigall, Nehring, Nickel, Pauls, Penner, Ratzlaff, Schmidt, Schröder, Unruh, Voth, Wedel and Wilms.

The center of the Mennonite congregation of Deutsch-Wymysle was always located in the village of the same name until its dissolution on 18 January 1945. A chapel and a school were built here between 1764 and 1770. Sometime between 1860 and 1864 the church burned down, destroying the original records of the congregation. It was soon rebuilt of tile with a tin roof. This meeting house was renovated after World War I, so that it looked quite new inside and out. The name of some of the older elders were Wedel, Frey, Peter Buller, Benjamin Unruh, Jakob Voth, Johann Kliewer and Johann Schmidt. Bernhard Voth served as deacon for 35 years, and was followed by Heinrich Unruh.

From time to time some families moved to Volhynia and South Russia. Since the 1870s many members of this congregation migrated to North and South America, especially from the Vistula region. Up to that time the congregation had about 300 baptized members; after that the membership continued to decline. In 1883 many members transferred their membership to the Mennonite Brethren congregation, which was founded here through the influence of the Mennonite Brethren of Russia. Elder Jakob Voth died young. His successors, Johann Kliewer and Johann Schmidt, joined the Mennonite Brethren. Thereafter there was no further ordination of a Mennonite elder. The small remaining Mennonite congregation was served by the ministers Peter Kliewer, Peter Foth and Jakob Foth. Only for baptism and communion services was it served by the elder of Deutsch-Kazun.

Peter Ratzlaff, Johann Kliewer, Heinrich Wohlgemuth and Johann Schmidt served the Mennonite Brethren continuously until they were well advanced in years. The worship services of this congregation were held in the home of Heinrich Kliewer until 1894, and from that time until the end of 1914 in the home of Peter Ratzlaff. From that time until 1945 the services for all the Mennonites of the area were held in the Mennonite church; they were led by ministers of the Mennonite Brethren. By the grace of God the two congregations lived in peace and harmony throughout the 30 years.

Peter Ratzlaff died on 1 October 1933. During his lifetime, perhaps between 1930 and 1932, a new elder and ministers were chosen by the congregation and ordained by Ratzlaff. These men were Leonhard P. Ratzlaff as elder, and Heinrich Wohlgemuth and Gustav P. Ratzlaff as preachers, and Erich P. Ratzlaff as deacon. Rudolf Witzke was chosen to lead the Sunday school. The Ratzlaffs chosen were all brothers, the sons of the deceased elder Peter Ratzlaff. Heinrich Wohlgemuth was the son of the deacon Heinrich Wohlgemuth, who died on 13 July 1930. Johann Kliewer died in Wymysle on 25 January 1942. Johann Schmidt moved to Deutsch-Kazun at the end of 1930, where he had charge of the subsidiary Mennonite Brethren congregation, which was organized there in 1923. Other ministers there were Edmund Jantz and Rudolf Kliewer. Johann Schmidt died on 26 February 1936. Of the men chosen to the ministry, Heinrich Wohlgemuth moved to Siemenkovo in the Siepr region in 1935 and joined the Baptists; he died there during the war. Edmund Jantz died in Poland after the collapse in 1946. Rudolf Kliewer was taken to Russia by the Russian army. Leonhard P. Ratzlaff died of exhaustion on 12 August 1946, in Frankfurt-on-the-Oder. Rudolf Witzke was taken to Russia, came back, and died in Stettin on his way to the West. Gustav P. Ratzlaff immigrated to Canada in 1948. The deacon Erich P. Ratzlaff also immigrated to Canada.

After German forces invaded Poland on 1 September 1939, Polish German-speaking populations, including the Mennonites in the village of Deutsch Wymysle (Nowe Wymyśle), were harassed or terrorized by the locals. Consequently, most Mennonites welcomed the Nazi invaders as a liberating force. The Nazi Party, NSDAP (Nationalsocialistische Deutsche Partei), was essentially antagonistic to Christianity but slowly gained support among Polish Mennonites after 1933, the year Adolf Hitler was appointed chancellor. After the invasion, the Mennonites of Deutsch Wymysle gave support to Fascist authorities, and did not evidently intervene in the mistreatment of Jews.

From the two congregations at Deutsch-Wymysle six young men were drafted into the Polish army before the outbreak of World War II. All of them returned. Right after the outbreak of the war 15 more men (old and young) were taken away by the Poles. All of these also returned. Between October 1940 and the end of 1944, 77 young men were drafted into the German army. Fifteen of them fell on the battlefield, and eight remained missing (two of them married men). The others returned. On 16 January 1945, 10 older men were drafted for defense. Of these, one died in a Polish prison camp, six returned, and three remained missing. After the collapse, Heinrich Foth, a teacher, was murdered in Gostynin by the Poles, and Franz Ratzlaff, a farmer, was so mistreated by the Poles on the unsuccessful flight to the West that he died on the day after his return to Deutsch-Wymysle.

Where did all the Deutsch-Wymysle Mennonites go? From 15 May 1947 until 31 December 1950, the following members of the Mennonite Brethren Church with their families crossed the ocean:

During the same period the following members of the Mennonite Church left for America:

On 31 December 1950, the following members were still in Europe:

Among those who emigrated from Deutsch-Wymysle to Fernheim, Paraguay, in 1930 was Friedrich Kliewer, who became a leader in the colony, returned to Germany to secure a doctorate degree in pedagogy, and then returned to Fernheim in 1940 to become the principal of the Fernheim high school until 1944. In the 1950s he was a teacher at Witmarsum, Brazil.

Neufeldt, Colin. "Mennonite Collaboration with Nazism: A Case Study of the Responses of Mennonites in Deutsch Wymyschle, Poland, to the Plight of Local Jews during the Early Nazi Occupation Period (1939-1942)." European Mennonites and the Holocaust. Ed. Mark Jantzen and John D. Thiessen. Toronto: University of Toronto Press, 2020: 172-201.