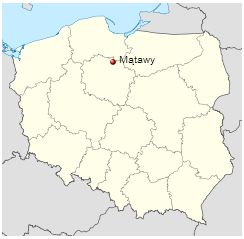 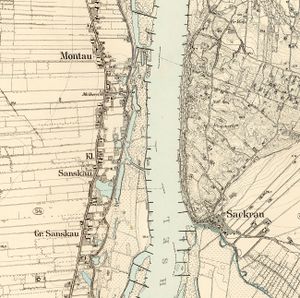 Montau (also known as Muntau, Muntawy, Mątawy; now known as Mątawy; coordinates: 53.575282, 18.749542 [53° 34′ 31″ N, 18° 44′ 58″ E]; population in 1905, 431), a Mennonite congregation in former West Prussia, near Neuenburg (Schwetz district). According to documents preserved in Danzig (now Gdansk) this settlement had existed since 1568, for on 2 February 1568 a number of Dutch Mennonites had moved in from the Danzig Werder—Thomas and Peter Jansen, Leonhard von Rho (garbled; probably Leenaert van Rhoon), Bernhard von Baygen (Berent van Bargen), Andreas (Andries) Unrau, and their companions and relatives—and concluded a rental contract with Hans Dulzky of Roggenhausen; it included the villages of Montau and Sanskau, an area of 50 hooves. The further settlement of the Schwetz-Neuenburg lowlands apparently radiated from here. The documents also indicated the Dutch origin of the settlers. Other evidence of this origin was seen in the architecture and in the Dutch Bibles preserved in some of these homes. Dutch was the language used in preaching until the 18th century. Later, when the Mennonites spread over the entire lowland, a subsidiary church was built at Obergruppe in 1776. 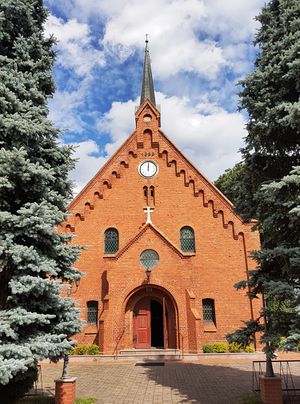 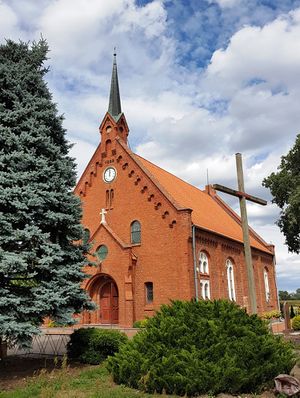 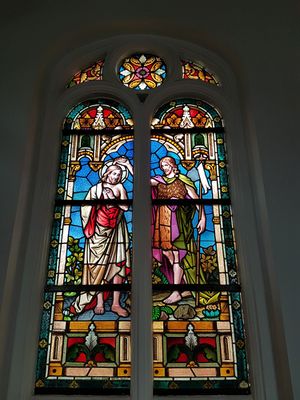 In course of the 16th and 17th centuries there were several additional immigrations from Holland. The Montau group was the first to settle near the left bank of the Vistula River, and gradually spread out over a wide area; as early as 1598 a number of Mennonites from Montau settled near Sanskau to begin the cultivation of this area. Others settled at Gruppe, Deutsch-Westphalen, Gross-Lubin, Neunhuben, Dragass, all in the neighborhood of Montau. In the late 18th century some of its members moved to Brenkenhoffswalde and to Deutsch-Kazun. The area of Montau was in the 17th and 18th centuries struck by various calamities. About 1620 the Mennonites had some difficulty with the governors, but in 1623 obtained freedom from military service and quartering. About 1657 during the Swedish-Prussian war Mennonite property was severely damaged by the passing armies; the floods of the Vistula repeatedly damaged the fields and the houses, particularly in 1677, when a number of farms were destroyed and many people and cattle perished, and many fields were ruined by the sand washed over them. A few years later they suffered a total crop failure. In 1727 the passing armies (Polish, Saxon, Swedish, Russian) plundered the farms to such an extent that they had to sell some of their land to pay their taxes. After 1772, when this area was occupied by Prussia, conditions were somewhat improved; but during the Napoleonic wars (1806-1815) the congregation again suffered severely. In many of their tribulations the Montau Mennonites were financially supported by the Dutch Mennonites.

In the 16th-18th centuries the Montau congregation belonged to the Frisian Mennonite branch. At a conference held in Montau in 1568 delegates from Danzig, Elbing, the "Kleine Marienburger Werder," Montau, and Thorn resolved to side with the Frisian party in the Netherlands. The first elder was very probably Hilchen Schmidt (Hylke Smit), who was commissioned by the Haarlem congregation in 1588 to depose Quiryn van der Meulen from the office of elder in Danzig.

The date of the building of the first church is not certain. But records show that there was one in 1568. This was a frame building with thatched roof. By 1859 it had become so badly ruined by several floods of the Vistula that it had to be practically rebuilt. The congregation later had two large churches, one in Montau with a small tower and a clock, which was built in 1898, Sister (a deaconess) Marie Schröder having willed a large amount to the congregation for this purpose. It had two stained glass windows. The other church was in Gruppe, without a tower, built in 1865. The congregation had no cemetery. Concerning the membership there are no exact figures before 1789. In the 16th and 17th centuries the congregation must have been rather small, apparently not more than 100 baptized members, but during the 18th century there was a rapid increase. In 1789 the membership (including children), numbered 847; 829 in 1845, 536 in 1917, 375 in 1941 (300 baptized members and 75 children).

For centuries the congregation held to the old doctrines and practices, including nonresistance. The North German law issued on 9 November 1867, threatening to deprive the Mennonites of their old privilege of freedom of military service also confused the congregation in Montau. After much correspondence and several audiences at Berlin, the church council accepted a new church constitution drawn up by Elder Peter Bartel, which permitted members to accept noncombatant service, as offered by the Order of Cabinet of 3 March 1868, but threatened to excommunicate those choosing military service; this was, however, never carried out. The question of military service caused the Obergruppe congregation to split off from the Montau church in 1869; the new group refused to tolerate soldiers as members, whereas the Montau congregation did not exclude such members. In 1920 the breach was healed, and the combined brotherhood was then called the Montau-Gruppe congregation.

Church records were kept since the 17th century. The important documents were preserved in the Danzig archives. In the village of Gruppe the congregation had an almshouse.

A large endowment for ministers' salaries vanished during the inflation of 1923. The members were mostly farmers, though there were also tradesmen and craftsmen among them. In 1939 the congregation had about 400 members, who lived in the neighboring villages and the cities of Graudenz and Neuenburg. Between 1918 and 1939, while the area belonged to Poland, some German members of the congregation were expelled to Germany; other emigrations also took place. Though there were some transfers from other denominations, the membership declined by about one hundred. In 1945 the congregation was dissolved by mass flight westward like all the other Prussian congregations.