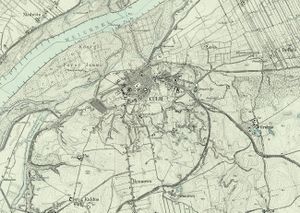 Culm (also known as Kulm, now Chełmno; coordinates: 53.34842° N, 18.42499° E [53° 20' 54.3" N, 18° 25' 30" E]; population in 1875, 9628, in 1910, 11,718, in 2006, 20,388), was located in former West Prussia, in the Marienwerder district, on the right bank of the Vistula, 24 miles (39 km) northwest of Thorn (Torun). Its population in 1910 included 276 Mennonites who belonged to the Schönsee congregation. They were partly of Dutch and partly of High German origin. Dutch Mennonites settled here as early as the middle of the 16th century; the High Germans probably came from Moravia during the first persecutions. These latter retained the old peasant coat with hooks and eyes until the first decades of the 19th century. On 22 August 1553 King Sigismund of Poland granted the Mennonites permission to settle here (F. Schultz, 12). About 1590 a union took place between the Frisians, who were for the most part immigrants from Holland, and the High Germans. In the lowlands of Culm and Schwetz there were two other  congregations of the strict Groninger Old Flemish. Under the jurisdiction of the Culm bishops and several noblemen who valued the Mennonites as colonists all the groups enjoyed considerable liberty. On 17 June 1689 Bishop Casimir Opalinski gave them a charter of religious freedom and toleration. In 1728 the Bishop of Culm defended them against oppression by the clergy and gave them a written guarantee on this point. Because they had received several Lutherans and Catholics into their membership they were to be expelled from the district of the city of Culm by the episcopal edicts of 16 June and 9 July 1732. But by 6 April 1733, this edict was revoked, after they had been forced to pay 10,000 florins. They were assisted in raising this sum by their brethren in Holland. August III of Poland extended all the earlier privileges (granted by the kings John Casimir and John Sobieski) by a government rescript of 9 September 1750 (W. Mannhardt, 93-95), to the Mennonites of the Culm lowlands. In 1768 the Mennonites were expelled from several villages they had been living in since 1588, whereupon they settled to the northwest in Brenkenhofswalde in the province of Brandenburg. At the time of the first emigration to Russia (1789) the following Mennonites were living in the Culm region (Reisswitz, 321).