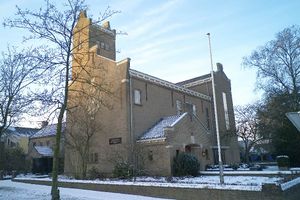 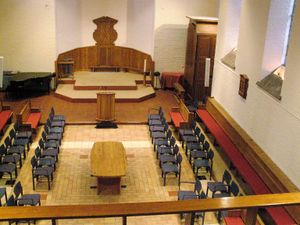 Wageningen, a town in the Dutch province of Gelderland (1958 pop. ca. 20,000; ca. 200 Mennonites; 2006 pop. 34,348), the seat of the Dutch Agricultural University (later Wageningen University), also the seat of a Mennonite congregation. In 1892 C. Honigh began to work toward the founding of a congregation, soon assisted by B. D. van der Laag (d. 1901), and P. Hoekstra. It was not until 10 February 1895 that a meeting of some 30 Mennonites living at Wageningen and surrounding villages decided to appoint a committee to arrange the founding. The result was the founding of an association for the promotion of the interests of Mennonites in Wageningen and surroundings in early February 1896. In 1905 this association was converted into a Mennonite congregation.

On Good Friday of 1896 ten persons were baptized at Wageningen, followed by a communion service, both led by B. Cuperus, a retired Mennonite pastor of Zutphen who had conducted a worship service at Wageningen on 9 October 1895. Henceforth he preached there regularly and gave catechetical instruction, and by his liberal financial contributions made it possible for the small young congregation to build a meetinghouse, dedicated by Cuperus on Ascension Day, 24 May 1901. Cuperus served until 1903, resigning because of bad health; he was followed by S. D. A. Wartena of Zutphen. On 22 November 1908, A. J. van Loghum Slaterus preached his entrance sermon as Wageningen's first regular minister. He served until 1917, followed by F. W. W. Braak 1918-1920, P. G. van Slogteren 1922-1926, M. van der Vegte Jr. 1927-1940, and B. Dufour 1940-    .

During World War II the meetinghouse was completely destroyed on 10 May 1940. A new church could not be acquired before 1951, planned by architect W. Gerretsen and Cramer, and dedicated 29 April 1951 by Pastor Dufour.

In the 1950s, church activities were a ladies' circle and Sunday school for children.

In December 1732 the Fonds voor Buitenlandsche Nooden (Dutch Relief Fund for Foreign Needs) settled fifteen Mennonite refugee families from Lithuania in the neighborhood of Wageningen, forming a hamlet then called Mennonietenbuurt. This settlement failed; some of these colonists had moved to Walcheren by 1736, where another group of Lithuanian refugees had settled. By 1738 the colony was dissolved and the houses were sold. A detailed account on this colonization was published by A. van Gulik in Doopsgezinde Bijdragen of 1905 and 1906 under the title "De mislukte kolonizatie te Wageningen."