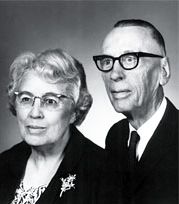 Abraham Ewell "A. E." Janzen: college and missions administrator; born in Vassilyevka (Wasieljewka), Naumenko Mennonite Settlement, South Russia on 22 November 1892 to Abraham H. and Eva (Neufeld) Janzen. The family came to Kansas from the Ukraine in March 1904. They settled on a farm in the Springfield community south of Lehigh, Kansas. Abraham attended country schools in Marion County, Tabor College Academy, Salt City Business College, and Tabor College, and he earned his BA degree at the University of Kansas in 1924 (MA, 1927). He completed his course work requirements for a doctorate in economics at the University of California, Berkeley. He married Zola Bae Lantz on 24 December 1917.

Janzen taught country school in Marion County for two years and then started teaching at Tabor College in 1916. From 1931 to 1935 he taught at Friends University. He served as president of Tabor College (1935-1942) during the Great Depression, helping develop a plan for the survival of the college after it had been closed for a year in 1934. After he left the administrative post at Tabor College he accepted a one-year assignment to work for the Mennonite Central Committee in the Mennonite colonies of South America. The purpose of the assignment was to deal with the economic crisis caused by inflation, to provide spiritual leadership in the churches, and to strengthen ties with the North American Mennonites.

In 1945 Janzen was appointed executive secretary of the North American Mennonite Brethren mission board. He served in this capacity for 15 years. Prior to 1945 Mennonite Brethren missionaries served six fields in the United States (Oklahoma), India, Africa (Congo/Zaire), China, Paraguay, and Canada. With the great expansion of missions after World War II, 10 new fields were added: Colombia, Brazil, Peru, Japan, Mexico, Ethiopia, Ecuador, Germany, Austria, and Panama. The number of missionaries rose by 241 to a total of 279. During the Janzen era there was a trend toward indigenization—a shift from a mission-dominated administration to a "sister church" relationship, and a shift from country villages to urban areas.

Janzen was an active writer. His publications include the following: Glimpses of South America (1944); Survey of Five Mission Fields (1950); A History of Tabor College, Part One (1958); Mennonite Brethren Distinctives (1966); Moro's Spear (1962). He helped edit and translate Jacob Becker, Origin of the Mennonite Brethren Church (1973), and served on the editorial board of Marion County Kansas, Past and Present (Van Meter, 1972). Janzen's autobiography, Memoirs: Each Step of the Way, was published in 1988.

During his retirement years Janzen continued to serve the church and his community. He served as archivist for the Tabor College Historical Library, director of the Mennonite Brethren Historical Society, and president of the Marion County Historical Society. He was involved in local history projects and the Golden Years Club and was active as lay leader in the Hillsboro Mennonite Brethren Church. He died at Parkside Homes, Hillsboro on 2 December 1995 at the age of 103 and was buried in Hillsboro.

Warkentin, A. and Melvin Gingerich, compilers. Who's Who Among the Mennonites. North Newton, KS: Bethel College, 1943: 127.