From GAMEO
This is the stable version, checked on 8 January 2017. 1 pending change awaits review.
Jump to navigation Jump to search 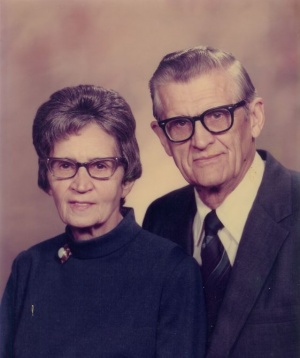 On 16 June 1920 John was baptized and became a member of the Alexandertal Mennonite Brethren Church. He attended the Gnadenfeld Zentralschule and the Halbstadt Mittelschule in the Molotschna settlement before enrolling at the University of Ukraine in 1922.

John’s studies were interrupted in 1926 when political conditions forced him to flee the Soviet Union. Unable to migrate directly to Canada because of medical problems, Toews remained in the Netherlands until 1928, and continued his studies at the University of Amsterdam’s satellite campus in Rotterdam.

In 1928 Toews and other members of his family migrated to Coaldale, Alberta, where they began farming. Two years later Toews decided to return to school, and enrolled at Tabor College in Hillsboro, Kansas. He attended there from 1930 until 1932.

While at Tabor he met Nettie Unruh, whom he married in 1933. Toews received his first experience in preaching as a student at Tabor. He served on the college’s gospel team, which visited congregations on behalf of the college. He also served briefly as interim pastor of the Jansen Mennonite Brethren Church in Nebraska during the summer of 1931.

Toews and his family moved to Portland, Oregon, in 1938. The following year he enrolled at Western Baptist Theological Seminary in Portland, where he completed a B.D. in 1940. He then accepted a position in the Bible department at Freeman College in South Dakota. In 1941 he completed his thesis, "The Christ of the Johannine Theology," and was granted the Th.M. degree from Western Baptist Theological Seminary in 1941.

That same year Toews enrolled in a doctoral program at Southwestern Baptist Theological Seminary in Forth Worth, Texas. He continued teaching at Freeman College during the 1941-1942 academic year, but left there in spring 1942 to accept the pastorate of the Buhler Mennonite Brethren Church in Kansas. During this time Toews was urged by leaders in his home congregation at Coaldale to forgo his doctoral studies, on the grounds that such a degree would cause him to lose touch with the congregations he served. Toews reluctantly agreed to this advice, and terminated his doctoral program.

In 1952, as a member of the Board of Foreign Missions, Toews made a trip to Belgian Congo to observe the mission work there. His experiences in Belgian Congo led him to leave the pastorate at Reedley in 1953 and become the General Secretary for the Board of Foreign Missions. He served in that role until 1963, a time of significant transition in mission philosophy and method.

In 1963 J. B. again returned to the field of education, accepting a position as professor of theology and missions at Mennonite Brethren Biblical Seminary in Fresno, California. He was appointed president of the seminary in 1964. As with the mission board, Toews presided over a period of marked change at the seminary, helping to guide its reorientation from a fundamentalist theology to one based more directly on Anabaptist-Mennonite understandings.

Toews resigned as seminary president in 1972, but remained in Fresno for the rest of his career. In 1973 he was appointed Executive Secretary of the Mennonite Brethren Church Historical Commission. He was instrumental in setting up a system of official archival repositories for the North American Mennonite Brethren Church, including one in Fresno that he directed from 1975 until 1982. Toews’s retirement did not, however, bring an end to his active church work. He continued to gather historical documents for the archives, teach at the seminary as an emeritus professor, and preach in pulpits around the world.

Though better known as a public speaker, Toews also wrote and published extensively during his career. A bibliography of his writings can be found in the Fall 1997 issue of Direction (vol. 26, no. 2).

Toews’s church involvement diminished during his later years. In 1986 his wife Nettie died. J. B. lived alone in Fresno until 1995, when he moved to a retirement home in Reedley, California. He remained there for the rest of his life.

John and Nettie had three sons: John, Paul and James.