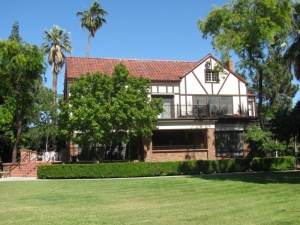 Mennonite Brethren Biblical Seminary, founded in 1955 and located in Fresno, California, was the result of the merger of the Bible and Theology Department of Tabor College and the graduate work at Pacific Bible Institute (PBI) (later Fresno Pacific College and now Fresno Pacific University). At the time of its formation it was owned and operated by the Board of Education of the United States Mennonite Brethren Conference on behalf of the Mennonite Brethren Church and the Krimmer Mennonite Brethren Church. Several members of the faculties of each two schools were chosen to form the new faculty. The first classes began on 8 September 1955 in the administration building of Pacific Bible Institute at 2149 Tuolumne Street in Fresno. The first president was B. J. Braun and the first dean was G. W. Peters. The Bachelor of Religious Education and Bachelor of Theology degrees were offered with PBI along with the Bachelor of Divinity and Master of Arts in Missions on the graduate level. By the fall of 1956 the school was located on a six-acre (2.4 ha.) campus at the corner of Chestnut and Butler Streets, adjoining the future campus of the Pacific Bible Institute.

In 1963 the Cornelius Hiebert Library was built, as a joint project with Fresno Pacific College. Other facility additions have included a prayer chapel (1967), housing facilities (1967), additional office space (1970), a library extension (1980), and a new educational wing with classrooms and lounges (1982). In 1974 the Center for Mennonite Brethren Studies was established and the Center for Training in Mission/Evangelism in 1984.

The Seminary received accreditation by the Western Association of Schools and Colleges in 1972 and from the Association of Theological Schools in 1977.

In 1995, MBBS started the BC Centre in Abbotsford, British Columbia, and in 1999 MBBS became one seminary in three locations as it became a full member of the Association of Canadian Theological Seminaries (ACTS) location at Trinity Western University in Langley, British Columbia (BC) and a part of the Winnipeg Centre for Ministry Training.

In June 2010 the seminary property in Fresno was transferred to Fresno Pacific University and renamed Fresno Pacific University Biblical Seminary later that year. Declining enrollments and budget constraints had led to the conclusion that the Fresno campus was no longer viable on its own. In March 2011 the MBBS Inc. board transferred the campus at ACTS in Langley, BC to the Canadian Conference of Mennonite Brethren Churches and Mennonite Brethren Biblical Seminary Canada was established with centers in Langley and Winnipeg. Bruce L. Guenther became president of MBBS Canada on 1 February 2012 after serving as interim president for the previous year. He was succeeded by Mark Wessner in 2016.