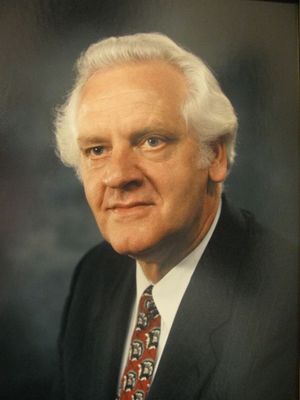 Henry grew up on a family farm near Grande Prairie and graduated from Grande Prairie High School in 1957. He was baptized in the La Glace Mennonite Brethren Church in 1958. Henry went on to study at Coaldale Bible School in Coaldale, Alberta (1957-1958) and Bethany Bible Institute in Hepburn, Saskatchewan (1958-1960), before earning a Bachelor of Theology from Mennonite Brethren Bible College in Winnipeg (1961-1964).

After graduation Henry and Elvera and their daughter Debra moved to Onida, South Dakota, where between 1964 and 1969 Henry served the Emmanuel Mennonite Brethren Church as pastor. A second daughter, Laura was born during this time.

In 1970 the family moved to Fresno, California, where Henry pursued a Bachelor's Degree in Psychology from Fresno Pacific College. Upon completion, he continued his education across the campus at Mennonite Brethren Biblical Seminary (MBBS), where he received a Master of Divinity degree. Henry distinguished himself while at MBBS, receiving the Academic Award, as well as the Sermon Award from Decision Magazine. While at MBBS, he also served as Interim Pastor at Neighborhood Church in Visalia and Rosedale Bible Church in Bakersfield.

Henry always assumed that after graduation he would return to the pastorate, but instead was asked to become Executive Director of Evangelism for the United States Conference of Mennonite Brethren. He served in this capacity, as well as Conference Evangelist, between 1972 and 1977, traveling widely throughout North America and beyond. During this time he remained connected to the classroom as well, serving as an adjunct professor in evangelism at MBBS from 1972 to 1978.

In 1977 Henry began doctoral studies at the University of Southern California in Los Angeles, graduating in 1981 from the Religion and Social Ethics department. Upon the completion of his studies, he returned to teaching at MBBS fulltime.

Henry began his tenure at MBBS in 1978. His areas of teaching included missions, urban studies, culture, and social ethics. In 1985, Henry was appointed as Director for the Center for Training in Mission/Evangelism, and until 1992 convened a variety of consultations related to the global mission of the church. Teaching and ministry assignments took him to churches throughout North America as well as Europe, Asia, South America, and Africa. Henry served as president of Mennonite Brethren Biblical Seminary from 1993 to 2003 – the longest serving president in the Seminary’s history. During Schmidt's tenure as president, the Seminary's educational delivery system changed from that of a single campus in Fresno to multiple campuses throughout North America (Fresno, CA; Langley, BC; Winnipeg, MB).

Between 1982 and 1985, Henry served as part of a church planting team for Fig Garden Bible Church in Fresno. Beyond the local church, his contributions to denominational and community work were wide and varied. Among his involvements are the following: Board member of the Cabana Recreation Association in Fresno; Vice-Chairman of Planning Committee for the Inter-Mennonite Evangelism Alive 1985 Conference; chairman of the US Conference of Mennonite Brethren Churches; member and President of the Board of Directors for Habitat for Humanity Fresno; and member of the Fresno Area Mission Network Commission.

Henry’s Alzheimer’s disease shifted retirement plans from doing further ministry to building relationships with family and praying for them. His wife Elvera, who supported him throughout his career while pursuing her own career as a kindergarten teacher, cared for him at home until his death.

Henry was widely known and respected in Mennonite Brethren constituencies in North America and beyond. His 6'3" (1.9 m.) frame, angular gait, and trademark white wavy hair set him apart from his peers. Schmidt taught with energy and passion, with a vision to connect education to real life, mission, and outreach. He often met consistently with a group of three to five handpicked students on a weekly basis for mentoring, prayer, interaction, support and study. He also invited students to accompany him in local church and constituency ministries, or even to the gym, court, or ice rink for a vigorous game of volleyball or hockey. His life was marked by a love for people of all ages, a witty sense of humor, a zest for life, a commitment to mentoring students and church planters, powerful vision for the church’s role in a changing world, and a deep commitment to the Lord and to Christian service.