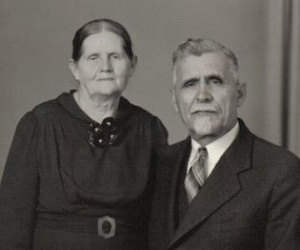 During his youth, Johann was the only boy in his village to be able to pursue secondary education, leaving him with a feeling of entitlement. Learning came easily to him. However, when he failed his teacher’s examination because he had misread an essay question, his ego suffered a severe blow. This lesson in humility eventually resulted in his conversion in 1896.

Johann’s first teaching position was in Neukirch, Molotchna Mennonite Settlement, where he taught for six years. During this time Johann married Liese Janzen in 1898. After her death in 1903, Johann married Margaretha Janz, daughter of Benjamin B. Janz and Helena (Vogt) Janz, and sister to Benjamin “B. B.” Janz.

In 1900 Johann accepted his second teaching appointment in Alexandertal, where his career lasted for 26 years. In addition to his teaching, he became part of the ministerial team in the local Mennonite Brethren (MB) Church. It was in Alexandertal where his children grew up. Tragically, Aron, the eldest, died from an infection after an ear operation for mastoiditis. The loss of his talented son became the means for a deeper commitment to the call of God in his life.

During his last years in Russia, Johann had been separated from his family for long stretches of time. During World War I he served in the Russian Red Cross. Following the war, he became an itinerant evangelist (Reiseprediger), (commissioned by the Molotchna MB Conference) with the task of strengthening the churches in the Terek and further afield in Siberia. A far-reaching revival had broken out in the wake of the Bolshevik Revolution. Johann was part of a team that was called to nurture the new Christians.

Immigration to Canada in the fall of 1926 was arranged by his brother-in-law, B. B. Janz. Since several of the Toews family had been diagnosed with trachoma, they were denied permission to enter Canada, having to stop over in Rotterdam, Holland for over a year. Owing to the kindness of the Dutch Mennonite Church, they were now able to regroup and plan for the future. During this year Johann also wrote his autobiography.

Shortly before Christmas 1927, the family was permitted to travel on to England, where they were housed at the Canadian Pacific Railway (CPR) transit camp at Atlantic Park in Southampton for several months. When the Toews family was finally given permission to immigrate in March 1928, it was a bittersweet parting because they had to leave daughter Helena behind in Atlantic Park, where she stayed until 1929 along with other detained immigrants.

Arriving in Coaldale, Alberta in April 1928, Johann and his family joined other members of the Toews and Janz clan that had already immigrated to Coaldale before them, and together they were able to purchase a farm. Relatives helped each other to establish farming ventures. Thanks to Margaretha’s plucky domestic skills and energies, they survived the Depression. The Toews family was grateful for the help given them by individuals from the Coaldale MB Church. Working in the sugar beets, learning how to irrigate and setting up a homestead were not what they Johann had anticipated. Much more suited to his calling, Johann left on his own for Hepburn, Saskatchewan in September 1928 where he taught for two school years at Bethany Bible School, helping to develop the school's curriculum. Johann began teaching in the Coaldale Bible School in 1930, one year after the school started in 1929, and continued working here until 1935.

In 1935 he was invited to return to teach at Bethany Bible School, where his son John "J. B." was the principal. Here Johann filled the position of a fourth teacher, and he and Margaretha became the first houseparents in the new dormitory. To the student body, Johann was known as Väterchen Toews (Beloved Daddy Toews). Then from 1941 to 1944 Johann taught in the Elim Bible School in Yarrow. In 1944 he returned to teach in Coaldale, and continued here until 1948 when encroaching deafness curtailed his effectiveness. In 1949, at the age of 73, he undertook an extensive missionary journey, visiting churches in Canada and the United States, where both his sons, "J. B." and Jacob "J. J." were then active.

Johann’s sermons usually featured a story for the children because the lessons were equally applicable to all and often more memorable than the sermon. His preaching was very practical, laced with illustrations. He had the highest regard for women who devoted their lives to raising godly families, feeling that teaching little ones was of critical importance.

After prolonged suffering with hardening of the arteries, he died 2 September 1953. During his final months when his mind appeared disoriented, visitors would come wanting to share a scripture passage with him. Johann would ask, “Which verse were you looking for?” and then cite the chapter and verse. His prayers remained lucid.

His life was not measured by certification or degrees but by its impact on young people and adults alike. The students whom he taught are in ministry around the world. The impact of his life is a continuing legacy. His constant encouragement was to live for God and not let materialism erode devotion to Christ. The title of a historical novel, Not of This World, written by his granddaughter Elfrieda Dick, typifies his life.