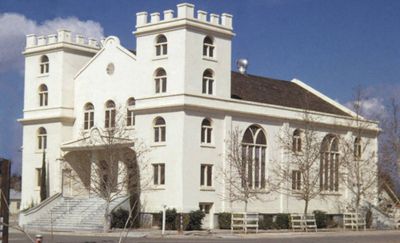 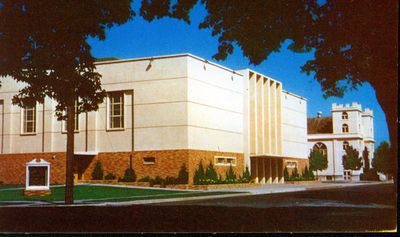 Since 1921 when two sisters from the congregation, Sophia and Maria Richert, sailed for the mission field in China, RMBC has been committed to Mennonite Brethren Missions; and their mission program still supports global missionaries in 2013 in Burkina Faso, India, Portugal, Montreal, Quebec, China, Thailand, Brazil, and the former Soviet Union. On a local level, Dr. Arnold W. Schlichting, president of the Extension Committee of RMBC, followed his vision of reaching out to the Hispanics in the community in 1955. The committee established a fund, rented a building in Parlier, and Dr. Schlichting began services the following year. From these beginnings Hispanic churches were also developed in Reedley and in the nearby cities of Orosi, Orange Cove, and Traver.

Women’s ministries, known as the Women’s Missionary Society in 1913, began as a strong support for Mennonite Brethren Missions in the early days of the church. Each year the society sent money to the missionaries they supported. The women worked on mission projects such as sewing, quilting, and other handcrafted items to be sold at the annual mission sale, which generated money for the missionaries. From these early beginnings, the women of the church have expanded their work for missions to include quilting for MCC sales, rolling bandages, tying comforters, embroidering tea towels, and preparing school kits. In recent years Women’s Ministries has extended its services to women by offering opportunities for Bible Study such as Women of the Word Bible Study that meets on weekday mornings and, to accommodate working women, in the evenings. Women’s Ministries still serves as an outreach to church members and the community in 2013 for women of all ages and diverse careers, including college age women; young mothers; working women; and seniors.

On 23 October 1911, the church opened a German school in Reedley that would later become Immanuel High School. In these early years the Mennonite Brethren congregation solicited the services of Wilhelm Neufeld, a member of the Reedley First Mennonite Church who had taught German and religion in South Russia. He became the first teacher for the new German school, and his first class in Reedley consisted of 20 students who met in a private home on K Street. Kornelius G. Neufeld and Johann P. Rogalsky, both educators from Russia, carried on the work after Wilhelm Neufeld left. By 2013, the school system was referred to as Immanuel Schools, which had expanded to include a high school, a junior high, and an elementary school. The elementary school, purchased in 2003, served students from kindergarten through the 6th grade.

RMBC has also served the community through Mennonite Brethren Homes, a corporation supported by five churches in the area. The senior citizens’ facility in Reedley, Palm Haven, began in 1942 with six residents. More room was needed before long, and improvements consisted of a convalescent facility and a residential care center for residents who needed assisted living. The name was changed in 1995 from Palm Haven to Palm Village Retirement Community and by 2013 the Village, with its 78 patio homes, 120 nursing home beds and 74 assisted living residential care rooms, reached a capacity of 300 residents.

Reedley Mennonite Brethren Church has been active in West Coast Mennonite Central Committee (MCC) since 1946 when MCC established a clothing center in Reedley. The first West Coast Mennonite Relief Sale, with proceeds donated to world relief, was held at the Richland Plant in Reedley in 1968 and was later transferred to Fresno Pacific University Campus due to lack of space. RMBC collaborates with other Mennonite churches on the West Coast whose members volunteer quilts, food, antiques, and their labor for the cause of World Relief.

Sunday school was instituted in 1905 when the church was founded, and the entire congregation met together in one class; but separate Sunday School classes were soon formed for both adults and children, including classes from preschool through grade six. Other forms of Children’s’ Ministries were added later. The Pioneer Girls program was established in 1959. Emphasis was placed on memorizing Bible passages. Crafts and mission projects for girls from grades one through six were also offered. Pioneer Girls was changed to Awana in 2002. The Boys’ Brigade program, which encouraged a boy and his dad to come to the meetings together, began in the same year as Pioneer Girls. Bible study, along with games, was stressed and the boys’ program also changed its name to Awana in 2003.

A community outreach program that was instituted by RMBS on 3 June 1983 was Chapter One, a pre-school day-care program. The children are taught Bible-based songs and stories by teachers who are certified by the state. Love Inc. is another service members of the church provide for the community by volunteering their advice to people in need. Such services as transportation to the doctor’s office along with counseling for those who need help are given with love. Kingdom Kids is an outreach to the community that combines the singing voices of the children of the church with those of the neighborhood school. Reedley’s Washington Elementary students from 1st to 3rd grades are invited for music, snacks, and Bible lessons after school. The songs that they practice are performed in church for the parents, grandparents, and other relatives.

Youth ministries have a long history at RMBC. As early as 1908 a Chrislicher Jugendverein (Christian Youth Association) was formed for young people of the church. In those days the youth sang songs and recited Bible passages. In 1919 the young people participated in the Mennonite Brethren Christian Fellowship on Sunday evenings. Along with foreign mission services and other activities, the youth formed quartets, performing in churches across the country. In the 1980s the youth participated in Wednesday night programs that included worship, retreats, socials, fund raisers, and Pacific District Youth Conferences. In addition, Hartland Christian Association has served the spiritual needs of our youth since 16 October 1943, when a plot of land in the Sierras was purchased for summer camp. In 2013 it had become a year-round camp equipped with facilities for summer and winter youth camps that serve 10,000 campers every year.

In 1994 the Cross Trainers Sports Ministry was begun at RMBC for the purpose of building relationships with the men of the community who did not attend church. The Cross Trainers use the sport of basketball to reach out to others. In 2002 and 2004 two basketball teams were sent on mission trips to the Ukraine. A winter basketball league has been organized and a Wednesday night open gym is offered. Hundreds of Bibles have been distributed and the men have participated in a Men’s Retreat at Hartland Christian Camp.

The Reedley Mennonite Brethren Church celebrated its 100th year of faithfulness to God, the church, and the community in 2005.

Reedley Mennonite Brethren Church, located in Reedley, Fresno County, California, in the fertile San Joaquin Valley, a member of the Pacific District, was organized 12 June 1905, under the leadership of D. T. Enns, whose family had come with others from the Middle West to settle in the area.   The church of less than 20 charter members had grown to a membership of 1,436 in 1957, the largest Mennonite congregation in the Western Hemisphere of any branch. In 1907 a building with a seating capacity of approximately 150 was constructed, enlarged in 1910 to seat 300 and in 1919 to 1,200. In 1952 a fireproof structure with 2,000 seats was built. The membership, which in the late 1950s was 30 per cent urban and 70 per cent rural, migrated from Kansas, Oklahoma, Nebraska, and Minnesota, approximately 100 coming from Russia. The church was well organized in all phases of church work. In the late 1950s it practiced footwashing. Pastors who have served the congregation are D. T. Enns, Abraham Buhler, Johann Berg, D. C. Eitzen, G. B. Huebert, J. B. Toews; Dan Friesen was serving as pastor in 1957, with H. R. Wiens as assistant pastor. -- Jacob J. Toews, 1959