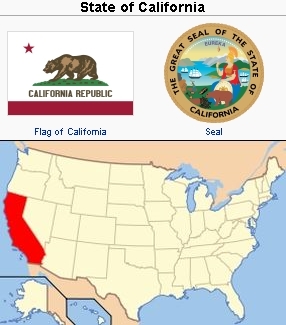 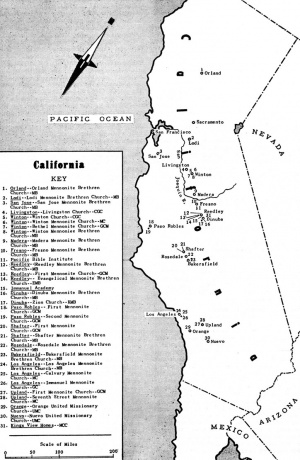 The second group, chronologically, to settle in California were the Mennonite Brethren (MB), now the largest Mennonite branch in California both in total membership (over 3,500 in 1950) and in number of active congregations (12). The first church to be organized was the Reedley congregation in 1905, the first settlers having arrived one year earlier. The Reedley MB Church grew to be not only the largest Mennonite congregation in California, but also became the largest church in the North American Mennonite Brethren conference. The total baptized membership in 1950 was approximately 1,350. A new church was built with a seating capacity of 2,200. Also in 1904 Mennonite Brethren families arrived in Escondido, near San Diego, and formed a congregation in 1905. This group, however, was of short duration due to lack of leadership. The Rosedale MB Church was organized in 1909, Bakersfield in 1910, Lodi approximately 1915, Shafter in 1918, Fairmead (now Madera) in 1919, Winton in 1922, Orland in 1923, Los Angeles in 1924, Dinuba in 1925, San Jose in 1940, and Fresno in 1942.

The Krimmer Mennonite Brethren (KMB) established a single church in California, organized on 17 March 1911, near Dinuba as the Zion KMB Church, which in 1950 had a membership of 250. Its building was remodeled and enlarged in 1941. Most of the early members of this congregation came from South Dakota and Kansas.

The (Old) Mennonites (Mennonite Church) were the fourth group to settle in California. Although members of this group arrived in the Dinuba area as early as 1905, a congregation was never organized in this locality. Others settled near Corning, north of Sacramento, in 1907 and later. Another group located in the area near Terra Bella in 1909 and during the following years. A Sunday school was organized in Pasadena in 1915. Early (Old) Mennonite settlers established their homes in the Upland, Orange, and Los Angeles area. Their first organized congregation was the one in Los Angeles organized in 1921, where Sunday school had been conducted since 1917. The second church to be established in California by this conference was in Winton in 1931. The Upland congregation was organized in 1943 and in 1950 had grown to be the largest, having 83 members. The California (Old) Mennonites numbered about 220 in 1950.

In 1911 the first members of the Church of God in Christ Mennonite Church came to California. The Benjamin T. Koehn and Jacob B. Ratzlaff families from Canada and the Jacob Hoeppner family from Hillsboro, Kansas, settled in the vicinity of what is now Winton, a congregation being organized there in 1912 having 12 members. Later, in 1944, the second church of this conference was established in Livingston, members of this group having lived in this area since 1912. The Winton group grew to be the largest, numbering approximately 350 members. The Livingston group numbered about 100 in 1950.

Factors that have operated in determining the location and growth of the various Mennonite communities were principally economic and climatic. The Mennonites have contributed much toward improvement of their respective communities located in the fertile San Joaquin Valley. Essentially the 6,000 Mennonites of California in 1950 were farmers and remained largely a people whose life was closely linked with the soil. Nearly one half of all California Mennonites lived in the Reedley-Dinuba area, the center of the world's largest fruit-growing district.

A notable exception to this rule, however, was the 1940 Mennonite Brethren Church of San Jose with its approximately 250 members, reported to be 95 per cent urban, whose chief occupation was day labor in the San Jose industries. In general, the slow but perceptible movement from farm to city was the result of young people seeking employment and business opportunities, and older people retiring from farm life. Along with this movement to the city there was a corresponding tendency to adopt urban ways of life, thus hastening the social process of assimilation into the American culture pattern. In some areas there was little to distinguish the Mennonite from his non-Mennonite neighbor and the distinctive Mennonite way of life has all but disappeared.

When asked whether Mennonitism, i.e., the Mennonite heritage, way of life, doctrines, separation from the world, etc., was as strongly emphasized in 1950 as during the early days of settlement in California, some stated that "there seem to be some weaknesses appearing," "by the conference, yes, but not by individual members," and, "in more liberal terms, the termination of the isolation due to language barriers having brought about a community responsibility." These comments indicated a movement toward the more complete acceptance of social responsibilities simultaneous with the loosening of ethnic and group ties. California Mennonites became actively engaged in home mission activities within the state, an evidence that they were concerned about the spiritual welfare of their neighbors.

California Mennonites established a number of institutions. Outstanding was the Immanuel Academy in Reedley, founded in 1912. Although the Reedley and Dinuba MB churches together with the Zion Krimmer Mennonite Brethren Church carried most of the economic and administrative responsibility for this school, students and contributions were gladly received from any Mennonite group. The Pacific Bible Institute of Fresno (later Fresno Pacific University), founded in 1944 and supported by the Pacific Coast Conference of the Mennonite Brethren, offered college level instruction to all Mennonite students interested. The Mennonite Aid Plan established in 1922 and the Mennonite Aid Society established in 1941, whose offices were located in Reedley, enjoyed wide support from various Mennonite groups. Thus fire and life insurance was offered to Mennonites by a growing Mennonite financial organization. The Mennonite Old People's Home established in Reedley in 1943 by the Mennonite Brethren offered a haven for aged Mennonites of all groups. Kings View Homes, a Mennonite Central Committee (MCC) project established in 1951, was a Mennonite mental hospital located near Reedley. Unitedly the Mennonites of California support the work of the MCC and it is here that they cooperate most wholeheartedly. Just as some Mennonite localities became noted for having their names on sacks of flour sent to Europe by the MCC, so California Mennonite congregations became known by their names which appeared on countless boxes of fruit and raisins, shipped by the ton to Europe and Paraguay.

Most California Mennonite churches report that their congregations are growing. Few non-Mennonites were being added in 1950, and but a small proportion of this increase is due to a local increase in population. The unprecedented migration of Americans to the west coast perhaps accounts for most of the Mennonite population increase in California.

California Mennonites constitute an active, prosperous, and progressive part of the American Mennonitism. They too are experiencing the uncertainties as well as the opportunities which come with all social change. A valiant effort is being made to preserve that which is good in the old, sift out the unwholesome in the new, direct the energies of their youth into channels consistent with their faith, and meet the demands of newly discovered social responsibilities. -- L. R. Just

California Mennonites were farmers and many still are closely linked with the soil. More than one-half of all California Mennonites live in the Reedley-Dinuba-Fresno area, the center of the world's largest fruit-growing district. There is, however, a movement from farm to city as the result of young people seeking employment and business opportunities and older people retiring from farm life. Most new congregations since 1940 have been located in urban areas. Along with this movement there is a corresponding tendency to adopt urban ways of life. In some areas the distinctive Mennonite way of life has all but disappeared. Many of the Mennonite Brethren churches no longer have "Mennonite" in their names.

Many of the new churches of all conferences are non-English speaking. In 1987 there are 10 Spanish-speaking congregations (7 MB, 1 GCM, and 2 MC). Four General Conference congregations are Chinese-speaking, and one Mennonite Church congregation is made up of people from Indonesia.

Among Mennonite Brethren institutions in California, Immanuel High School (1912) continues in operation. Pacific Bible Institute of Fresno (MB, 1944) is called Fresno Pacific College in 1987 and offers baccalaureate and masters' degrees. Mennonite Brethren Biblical Seminary and the Mennonite Brethren conference offices are located adjacent to the college. Upland College (BIC) achieved regional accreditation in 1959; it ceased to exist when it merged with Messiah College, Grantham, Pa., in 1965.

Many of the churches sponsor and operate day-care and preschool services for community children. The General Conference Mennonite Church began a camping program in 1927 using YMCA facilities. In 1967 they acquired Camp Keola at Huntington Lake in the High Sierras. The Mennonite Brethren camping program has been carried on at Hartland Camp, Badger, CA, since 1948.

The First Mennonite Church in Reedley, has an active voluntary service unit serving the elderly since 1983. Various other voluntary service activities have taken place over the years, including units at Kings View Homes, the Hoopa Indian Reservation, and migrant labor camps. Brethren in Christ rescue mission work in San Francisco and Riverside has developed into more general family services programs.

Two Mennonite Disaster Service units, one in the north and the other in the south, function in California. The clothing and relief center and administrative offices of the West Coast Mennonite Central Committee (MCC) are located in Reedley. There are Nearly New shops and Ten Thousand Villages stores, under the auspices of local congregations and MCC throughout the state. -- Clayton Auernheimer

Burkholder, H. D. The Story of Our Conference and Churches. North Newton, KS, 1951).