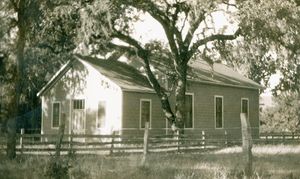 San Marcos Mennonite Church, (General Conference Mennonite Church), located at Chimney Rock near Paso Robles, California, was the first Pacific District Conference church to be organized in California. In 1896-97 six Mennonite families from Beatrice, Nebraska settled 10 miles northwest of Paso Robles, including the minister, A. J. Wiebe. During these years another Mennonite settlement was established in the Estrella district, east of Paso Robles, among whom was Jacob Hege, a preacher. In 1897 these two groups, though rather far apart, organized a congregation. Hege was elected elder and Wiebe his assistant. In 1898 the congregation built its first church at Chimney Rock, northwest of Paso Robles. Since the two settlements were so widely separated, and transportation was difficult, it became necessary to establish two meeting places, one group continuing to meet at the new church with Wiebe, while the other group met in an adobe church near Estrella with Hege. Monthly union meetings were conducted in order to maintain the spirit of fellowship between them. 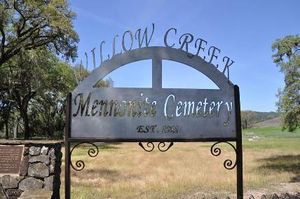 A memorial marker was erected at the site of the Willow Creek Mennonite Church. The bronze plaque on the marker has been engraved with the revered scripture verse which prefaced many of the writings of Menno Simons: "For other foundation can no man lay than that is laid, which is Jesus Christ." I Corinthians 3:11.