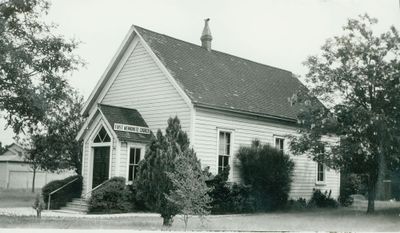 Paso Robles First Mennonite Church in Paso Robles, California, was originally organized in 1897 as part of the San Marcos Mennonite Church, the earliest Mennonite church in the Pacific District Conference in California. Six Mennonite families from Beatrice, Nebraska, founded the church near Paso Robles. At the same time another Mennonite settlement was established in the Estrella district with Jacob Hege as the minister. Though the two groups were located some distance apart, they decided to organize a congregation with Jacob Hege as the elder and A. J. Wiebe as his assistant. In 1898 the congregation built a new church, but since the two settlements were far apart travel was difficult. Consequently, Wiebe’s group met in the new church while Hege’s group met in an adobe church in Estrella, albeit with monthly joint meetings. The adobe church building has survived to this day. Originally the sermons were in German only, but they changed to both German and English, and over the years to English only. In 1903 the congregation disbanded, and the Estrella group organized as the First Mennonite Church of Paso Robles with Jacob Hege as the minister. The group dismantled an old Methodist Church building in Adelaida and moved it to town where they reconstructed it as their meeting house.

The Willow Creek Church and the Paso Robles First Mennonite Church have supported foreign missions and Mennonite Central Committee relief work throughout the years. Their youth and adults have participated in the camping programs at Lake Sequoia and later at Camp Keola in the Sierra Nevada Mountains. A Christian message titled "Light for the Way" is aired every Sunday morning (2013) on the local radio station. The Hopi Mission Station in Arizona is supported by the congregation with clothing donations. In 2013 the church also sponsors a Christian preschool titled Rainbow Bright. In addition to serving the children of the community, they have held church services in the local nursing home on Sundays.

A memorial marker was erected at the site of the Willow Creek Mennonite Church. The bronze plaque on the marker has been engraved with the revered scripture verse which prefaced many of the writings of Menno Simons, our 16th century Anabaptist forebear: "For other foundation can no man lay than that is laid, which is Jesus Christ." -- I Corinthians 3:11.

Burkholder, H. D. The Story of Our Conferences and Churches. 1951.

Jacob Hege served the congregation until 1906, when he moved to Idaho. John K. Lichti succeeded him and was ordained as elder by Michael Horsch. Hege returned to Paso Robles and served as elder 1915-1919, succeeded by his son Christian C. Hege 1919-1944. Since that time the church has been served by Arlo Kaufman, Ben Rahn, M. S. Galle, and Alfred J. Schwartz, pastor in the late 1950s; the membership at that time was 69. -- Cornelius Krahn, 1959