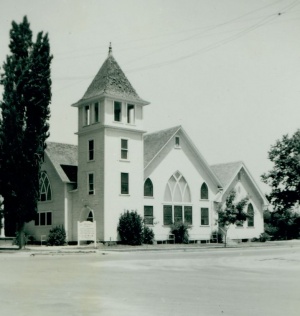 First Mennonite Church, a member of Mennonite Church USA, began when Daniel T. and Babetta Ruth Eymann and family moved from Upland, California, to Reedley in 1903. As the only Mennonites in Reedley, they recruited others to come, and in June 1906 the Mennonites organized a congregation with 25 charter members. The congregation was a member of the General Conference Mennonite Church. The first meeting house, which still serves the congregation in 2013, was built in 1908, enlarged in 1914, and remodeled in 1944. During the winter of 1907-1908 H. J. Krehbiel served the church as supply pastor, and by September 1909 he became the first full-time pastor, serving the congregation from 1 September 1909 to 31 December 1927. During his ministry the congregation grew to 405 members. By 1965 the membership reached its peak with 623 members and an additional 250 children attending.

The rich tradition of music began in the early days of First Mennonite Church (FMC) when a choir was organized in 1909. By 1916 the Men’s Chorus with 25 voices was formed by C. F. Mueller as director and Emma Ruth as accompanist. In 1927 an adult mixed choir was established and by the early 1960s the church had added five additional choirs ranging from a Children’s Choir to a Young People’s Choir. In the beginning, the congregation used an Estey reed organ (a pump organ) but acquired a grand piano in 1920 and a Wicks pipe organ in 1938. It was upgraded by a Casavant pipe organ in 1977. A worship band with guitars, drums, and accompanying instruments was added in 2012.

The Ladies’ Missionary Society began on 9 February 1905, under the leadership of Babetta Ruth Eymann. In 1923 it became the Worthwhile Circle with the purpose of promoting Christian fellowship and supporting missions. In the 1990s the name changed to Mennonite Women. Work-sewing and book-study groups met monthly. Many of their quilts sold at Mennonite Central Committee (MCC) auctions. They also served funeral meals and conducted Bible Study. Quilting was discontinued in 2009.

The Men’s Brotherhood of FMC organized on 29 November 1940, with a three-fold purpose: to promote fellowship, enrich their spiritual lives, and minister to the church and community. The men aided in repair projects around the church. The name changed to Mennonite Men, and in 29 December 1955, they aided in the establishment of Mennonite Disaster Service (MDS). Although Mennonite Men disbanded, the men continued their involvement in MDS.

In 1910 youth groups affiliated with Christian Endeavor (CE) met regularly. In the 1950s they phased into the Mennonite Youth Fellowship (MYF). The General Conference retreat program for all ages began in 1915 under the sponsorship of the YMCA. The first General Conference Young People’s Retreat met at Camp LaVerne in 1935 and continued to meet in the Sierra Nevadas. Later the Family Retreat moved to the ocean in Cambria, California. From 1967-2013 both retreat groups continued at Camp Keola at Huntington Lake, California, also in the Sierras.

Outreach to the community through Noah’s Ark, a center for day-care and preschool services for children from three to five years old was opened at FMC on 8 September 1975. In 1991 their doors closed after 16 years of service. Reedley Peace Center, an interfaith organization meeting weekly at FMC, was established in 2002 and continues in 2013 with the purpose of promoting nonviolence and fostering local and global reconciliation among people.

Reedley First Mennonite Church (General Conference Mennonite), a member of the Pacific District Conference, had its beginning in 1903, when Daniel T. Eymann and a few other families came toReedley through the Santa Fe Immigration Department to look over its possibilities.In June 1906 the Mennonites who had settled in Reedley organized a congregation. In 1908 the first meetinghouse was erected, which was enlarged in 1914 and remodeled in 1944. The membership of 593 consists largely of immigrants from South Germany and from Russia and their descendants. A majority at the present time live in the country and are fruit farmers, although many live in Reedley. Ministers who have served the congregation since its beginning are H. J. Krehbiel, J. M. Regier, J. H. Langenwalter, P. K. Regier, and Aaron J. Epp, the pastor in 1957. -- P. K. Regier.