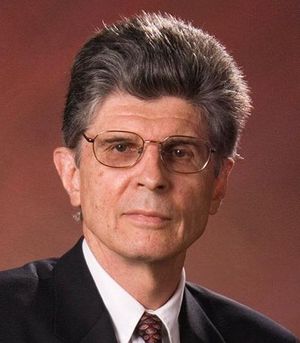 Paul’s father, J. B. Toews, was a prominent Mennonite Brethren pastor, mission executive, and seminary president, and these connections to the larger Mennonite world shaped Paul’s life from a young age.

After completing his undergraduate studies in history at Tabor College (1962), Toews earned an MA from the University of Kansas (1965) and a PhD from the University of Southern California (1972), both in the field of U.S. history. While still pursuing his doctorate, Toews came to Pacific College (today Fresno Pacific University) in 1967 as a National Teaching Fellow, and taught in the history program there until 1969. After two years of teaching at the University of Wisconsin, Parkside, he returned to Fresno to permanently join the Pacific College faculty in 1971.

Toews was one of a group of young Mennonite scholars recruited by then-President Arthur Wiebe in the 1960s and early 1970s to help shape the academic programs of what was still a new college. Many of these scholars, including Toews, devoted their entire careers to Fresno Pacific University and played a profound role in shaping its vision and ethos.

His first calling at Fresno Pacific was as a professor and teacher of history. He chaired the history program from 1974 until 1996, and for many of those years was the most visible face of that program. Toews is remembered with affection by his students. He truly was a mentor to many of them, recognizing their academic promise and encouraging them to pursue further studies. He gave generously of his time and was never too busy for conversations with his students.

Toews wrote and published widely in the field of Mennonite history and was among the most respected Mennonite historians in the world. His articles appeared in The Mennonite Quarterly Review, Mennonite Life, Journal of Mennonite Studies, Conrad Grebel Review, Direction, and other journals. He was editor-in-chief for the Mennonite Brethren Church Historical Commission series "Perspectives on Mennonite Life and Thought," in which he helped produce fifteen volumes. Most notably, he as the author of Mennonites in American Society, 1930-1970: Modernity and the Persistence of Religious Community (1996), the fourth volume in 'The Mennonite Experience in America" series.

In 1995 Toews became a lecturer on the Mennonite Heritage Cruise in Ukraine, which he did annually until 2010. His involvement on the heritage cruises opened up a new chapter in his career, as he became aware of the rich documentary resources on the Mennonite story in Russian and Ukrainian archives. Toews devoted almost two decades to locating, identifying, and reproducing tens of thousands of these documents that had previously been unknown to Mennonite historians.

His connections in Ukraine led to him receiving a Fulbright Visiting Professorship at Zaporizhzhia State University, where he was named a lifetime "Honorary Professor." He has worked with Russian and Ukrainian historians on various conference and publication projects, including Etnokonfessiya v Sovetskom Gosudarstve: Mennonity Sibiri (Ethno-confession in the Soviet State: Mennonites in Siberia), compiled by Andrej Savin.

The contributions of Paul Toews to Fresno Pacific University, the Mennonite Brethren Church, and to the larger world of Mennonite history are almost incalculable. His death was a great loss to the many people who knew him and benefitted from his scholarly work.