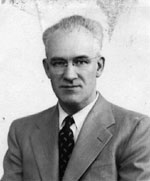 Die Mennonitische Rundschau was the oldest Mennonite periodical published continuously under one name continuously numbered, with its first issue on 5 June 1880 and its last issue in January 2007. (The Mennonite, which began in 1885, was still published in 2019, but restarted its numbering in 1998 when it merged with the Gospel Herald.)

Die Mennonitische Rundschau was the direct successor to the Nebraska Ansiedler (first issue June 1878), and was established by the Mennonite Publishing Co. (John F. Funk) to serve the newly established Russian Mennonite communities in the prairie states and Manitoba. It appeared as a 4-page semimonthly, 10 x 15 ½ inches, until the end of 1882, and continued as a weekly. A semimonthly edition was published from 1883 on "for readers in Europe and Asia," apparently to keep the Mennonites in Russia in contact with American Mennonites. The edition was still being published in 1889, when the publisher described it as in "format somewhat smaller, but it contains all the Mennonite news which appears in the weekly edition in addition to other reading matter out of the latter." The subscription price was given as 50 cents, 3 marks, or 1 ruble. Since January 1899 was the first time that the subscription price for the weekly edition was given in terms of German and Russian money, it is probable that the "European edition" continued until then.