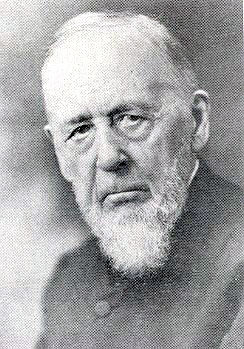 John Fretz Funk: probably the outstanding leader of the Mennonite Church (MC) in the 19th century; son of Jacob Funk and Salome Fretz, was born on 6 April 1835 on the family homestead in Hilltown Township, Bucks County, Pennsylvania, where he spent the first 22 years of his life. He was a great-grandson of immigrant Bishop Heinrich Funck (d. 1760). He was married to Salome Kratz 19 January 1864. One of his two daughters, Phoebe, married A. B. Kolb. John died on 8 January 1930 and was buried in the Prairie Street (Elkhart, Indiana) cemetery.

John's only higher education, two terms at Freeland Seminary (now Ursinus College), prepared him for a career of public school teaching in his home community, but after two years in that profession, he entered the lumber business in Chicago (arriving 11 April 1857) with his brother-in-law Jacob Beidler (later in partnership with John F. Rittenhouse), in which he continued successfully for ten years. On 6 April 1867 he moved to Elkhart, Indiana, with the printing and publishing business he had established in Chicago 1 January 1864. Here he spent the rest of his long and active life.

The ten years in Chicago were decisive in Funk's life. Here in 1858 he was converted in a Presbyterian revival, here he met and associated intimately with D. L. Moody (1861-1867), to whom he attributed much of the influence which moved him into active Christian service with progressive ideas in Sunday school, evangelism, and religious publication, far in advance of the lethargic mid-century Mennonite (MC) Church of his fathers. His decision to cast his lot with this church (he returned to Bucks County for baptism in 1860, and was ordained as a minister for the struggling Cullom, IL, congregation some 50 miles south of Chicago in May 1865) and assume aggressive leadership was an event of major significance for the North American Mennonitism far beyond the bounds of his own denomination, for besides being a pioneer Mennonite publisher, he played a major role in the immigration and colonization of the Russian Mennonites in the United States and Canada 1873-1880, and in effect became the publisher for the Manitoba Mennonites. He did not become a bishop until 6 June 1892 (rendered inactive 31 January 1902, when his active career as a church leader came to an end), but he was by all odds the most influential leader for 30 years (1870-1900), shaping the course of the Mennonite Church.

His base of operation was his publishing house, established at Elkhart as John F. Funk and Brother 1867-1875, then incorporated as the Mennonite Publishing Co., 1875-1925, with widely held stock ownership. (Unfortunately a bank failure in 1903, which cost him a personal loss of $40,000, and a fire in 1906 caused the company to become bankrupt in 1906, a blow from which he never recovered, although he continued in business selling book stocks and doing some publishing of reprints of older titles until the age of 90 in 1925.) His great influence through the church paper Herald of Truth (German edition, Herold der Wahrheit 1864-1902) was supplemented by his wide traveling and speaking, conference work, and personal influence. He gathered a group of progressive younger men around him and made Elkhart the strong center of church leadership and growth. He brought J. S. Coffman, the noted evangelist, to Elkhart as an editor in 1879; John Horsch, a writer and historian, in 1887; G. L. Bender, a mission leader, in 1890. H. A. Mumaw, the ultimate founder of the Elkhart Institute/Goshen College (1894), was attracted. In Elkhart the mission headquarters of the Mennonite Church was established (1892); here the Mennonite Aid Plan was founded (1882); from here the first foreign missionaries were sent out to India (1898) at a meeting presided over by Funk. Here the first relief agency was organized (1897). In the church which Funk founded and of which he was the pastor (1871-1902) the first young people's meeting was established (1890?), and one of the first Sunday schools (1870). In 1872 Funk, with Daniel Brenneman, conducted the first evangelistic services (Masontown, PA, in 1872) in the Mennonite Church (MC). He wrote the first Sunday-school helps (1880), published the first Sunday-school magazine. In all these good forward steps Funk was a leading figure, if not the actual innovator, moving cautiously, often with great courage, against much opposition, using the columns of the Herald in vigorous promotion,

One of Funk's great contributions was his creative combination of conservatism and progress. He had a deep historical sense and anchored the church in its great historic heritage. He published Menno Simons' Complete Works in English (1871) and German (1876) early in his career and the Martyrs' Mirror likewise in German (1870) and in English (1886), in addition to a vast amount of historical articles on the Anabaptists and Mennonites (largely by John Horsch ), and built up an excellent Mennonite historical library (the core of the Goshen College Mennonite Historical Library). He himself wrote The Mennonite Church and her accusers (Elkhart, 1878), a defense against the attacks of the Reformed Mennonite writer Musser against the Mennonite Church. He stood firmly against the Methodistic type of more emotionalized piety (Brenneman and Mennonite Brethren in Christ, 1875) and equally vigorously resisted the reactionary type (Wisler, 1871). He guided the church in gradual change down the middle of the road, and is more responsible than any other one man (teamed with J. S. Coffman) for the general character of the Mennonite Church (MC) in the 20th century in its middle-of-the-road position between tradition on the one hand and undirected progress on the other. He also played a wise and good role in preparing the reunion of the Mennonite and Amish bodies, which came to full fruition 1915-25.

Funk's contribution as a publisher is remarkable. His major periodical publications include Herald of Truth (1864 until its merger with Gospel Witness to form the Gospel Herald in 1908), Mennonitische Rundschau (1878-1908), Mennonite Sunday School quarterly (1890-1908, several levels). He published in repeated editions the prayer books, hymnbooks, catechisms, and confessions which became the household books of Mennonites (including the Russian Mennonites and the Amish) in the second half of the 19th century.

Funk's role in the great Russian immigration was outstanding. Peter Jansen wrote, "My Father, Cornelius Jansen, always said you were more responsible than any other man." His home in Elkhart was the first stopping place, not only of the 12 delegates from Russia in 1873, but of hundreds of immigrants in 1874ff., who stayed at his home or were quartered in the Prairie Street Mennonite Church. He was the channel of contact with U.S. senators and the great railroads. He personally conducted the delegates on their tours to Minnesota, Dakota, Nebraska, and Kansas. He helped to organize the great U.S.-based aid agency, Mennonite Board of Guardians, of which he served as treasurer for many years. He negotiated reduced rates for transportation by steamship companies and railroads, and raised both loan funds .and relief donations for the needy settlers in their first hard pioneer years. His name was a household word among the Mennonites of Manitoba, who had read his Rundschau for two generations, and for whom he published their confession, catechism, and hymnbooks for 50 years.

Fortunately Funk's great work was done by 1902, when through unwise methods of working as a bishop, and through mismanagement of his publisher-church relations he was forced into an unworthy retirement at the age of 67 (1902-1908). Fortunately also his publishing work was salvaged by the organization of a Mennonite Church (MC)-owned  Publication Board (1908) and Publishing House; the school which he had first encouraged (then opposed), Goshen College, stepped into the place of progressive leadership, and the Mennonite Church General Conference (MC) (unifying the regional Mennonite Church conferences, including the Ontario conference) which he long and vigorously advocated (though later failed to support) became the unifying factor in his church.

Kolb, A. C. A Brief Historical Sketch of the Life of John F. Funk and His Brother Abraham K. Funk While Engaged in the Publishing Business as the Mennonite Publishing Company From 1864 to 1825. Elkhart, 1925.