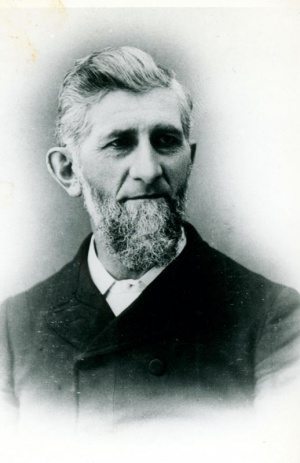 Daniel Brenneman, son of Henry Brenneman, and great-grandson of Melchior Brenneman, a Mennonite exile from Switzerland who was one of the first settlers of Lancaster County, Pennsylvania (1717), was born 8 June 1834, near Bremen, Fairfield County, Ohio. In 1838 his mother, a brother, and a sister died of smallpox, and he himself narrowly escaped. He was raised on the farm and attended the local school. He was converted in 1856 and soon after joined the Mennonite Church (MC). On 22 March 1857 he was married to Susannah Keagy of Augusta County, Virginia. To this union 10 children, 5 sons and 5 daughters, were born. The youngest daughter, Phoebe (Mrs. C. F. Snyder), was a missionary to China, 1904-1941. The oldest son, Timothy, was editor of the Gospel Banner (Mennonite Brethren in Christ), 1882-1885. In 1864 he moved to Elkhart County, Indiana, where he lived until his death in 1919. In March 1908 he lost his wife after 51 years of married life. In April 1910 he was married to Delia Troyer, who survived him.

From his youth Daniel Brenneman expected to be a minister. His father was a godly man who exerted a great and good influence over him. In 1857 Daniel was chosen by lot and ordained to the ministry in the Mennonite Church in Fairfield County, Ohio. As time went on, he became a vigorous speaker and was considered one of the ablest among Mennonite preachers. He traveled extensively and was eagerly listened to wherever he went. He was noted for his progressive views and early in his ministry began to preach in English. In 1872 he with J. F. Funk conducted the first continued or revival meetings ever held in the Mennonite Church in the United States, at Masontown, Pennsylvania.

Gradually Brenneman became involved in the controversy between the progressive and conservative elements of the church, and in 1874, about 10 years after he located in Elkhart County, he found himself unable to remain with his denomination, having been excommunicated for disagreement with the church over methods of work. Together with Solomon Eby of Ontario he organized the Reforming Mennonites, a group that later became part of the Mennonite Brethren in Christ church (later the United Missionary Church).

In 1876 Brenneman compiled and published a hymnbook, The Balm of Gilead. In July 1878 he began publishing the Gospel Banner, which became the official organ of the church. He served as editor and publisher until October 1882. For two years (1883-1884) he edited and published the Youth's Monitor, a religious monthly paper for young people and children.

For 63 years he was a faithful herald of the Gospel. During his lifetime the Indiana and Ohio Conference, which he organized, grew to include some 1,700 members. He served for many years as a pastor, and for 12 years as Presiding Elder, in the latter capacity doing the work that later required two men. He was a member of the first seven General Conferences of the Mennonite Brethren in Christ Church, and during his entire career he never missed an annual conference.

Brenneman retained his mental alertness to the end. His travels extended from Virginia to California and through Canada, and his ministry was abundant both in sowing and the reaping. He reached the ripe old age of 85, dying on 10 September 1919. His body was interred in the Oak Ridge (City) cemetery, Goshen, Indiana. The Brenneman Memorial Church (Missionary Church) in Goshen is named after him.