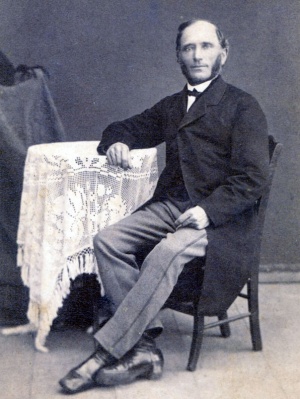 Cornelius lost his mother at the age of ten, and then lived with his uncle Gerhard Penner, elder of the Heubuden congregation, who helped him in his training as a merchant. He was baptized in 1839 at Tiegenhagen. Cornelius married Helena in 1848 and in 1850 the family immigrated to Berdyansk, Russia, returned to Schidlitz, a suburb of Danzig, in 1852, and went back to Berdyansk in 1856. Cornelius worked as a grain broker, shipping grain to England, and served as "the founder and for many years the representative of the Prussian and Mecklenburg Consulate" at Berdyansk. Through his English connections, Jansen introduced English reaping and threshing machinery to the Russian Mennonites who were supplying grain to him. Jansen and his family spent time with the British Consul at Berdyansk, and he and his children were able to learn English. Jansen preferred Russia to Prussia because of Russia's greater economic and social freedom, but he distrusted the Russian government and chose to retain his Prussian citizenship.