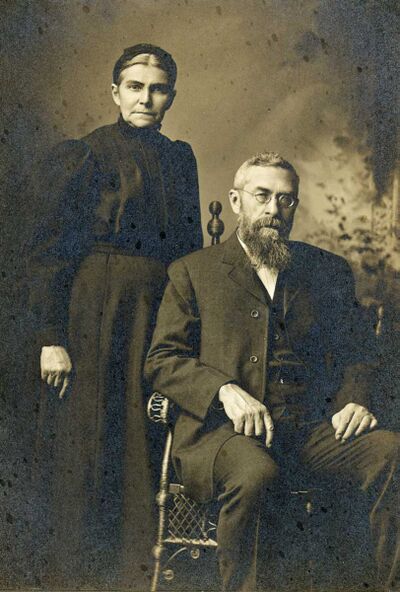 Elisabeth and Martin B. Fast, 1909.
Photo courtesy of the author

In 1866, Peter Fast, who was landless, negotiated with Russian authorities on behalf of other Molotschna landless Mennonites. After the death of Aganetha Fast’s father, Martin Barkman, the Fasts purchased a portion of his farmstead in Ruckenau.

M. B. Fast finished his schooling at age 14 and joined the Neukirch Mennonite Church at age 19. That same year, 1877, his father helped lead a large group to North America. On 26 May (O. S.), they left on a special train for Antwerp, boarding the S.S. Vaderland and arriving in Philadelphia on 30 June. Finally, on 3 July, the Fasts arrived in Beatrice, Nebraska, where Cornelius Jansen and his children welcomed them with a handshake, coffee, and zwieback.

Fluent in German and Russian, M. B. Fast taught school in the village of Rosenort. In 1881, he became a correspondent for Die Mennonitische Rundschau and the Fairbury Gazette, where he gained writing and speaking English skills.

Die Mennonitische Rundschau hired M. B. Fast on 23 December 1903 and named him editor 27 January 1904. In 1908, he visited several colonies in South Russia, including Molotschna, Chortitza, the nearby daughter colony of Memrik, and Crimea. He sent numerous dispatches back to the Rundschau. On 12 October 1910, Fast retired to Reedley, California. He was a founding member of Zion Krimmer Mennonite Brethren Church, near Dinuba.

In 1915, Fast went to Chicago to help found a Krimmer Mennonite Brethren German-language paper, Der Wahrheitsfreund, in conjunction with a city mission. But, in 1916, after emergency surgery and a prolonged recovery, Fast resigned and returned to Reedley.

Fast contributed to both the Rundschau and the Wahrheitsfreund, informing fellow Mennonites of the plight of Siberian Mennonites during the Russian Civil War. In early 1919, he organized a drive to collect donations and supplies and shipped them to Vladivostok, Russia. He followed via passenger ship and arranged the transport of supplies to Mennonite settlements near Omsk. Wilhelm Neufeld of Reedley traveled with him from Vladivostok to the colonies. Fast sent dispatches to the newspapers and upon his return embarked on a mid-winter speaking tour, pleading with congregations in the Midwest to help their fellow Mennonites.

On 30 June 1922, Fast organized an auction of donated goods at the John K. Warkentin farm south of Reedley. He sent proceeds of $1750 from the first Mennonite Relief Sale to MCC workers in South Russia.

In the late 1920s, several Mennonite families escaped from Siberia by crossing the frozen Amur River and making their way to Harbin, China. They hoped to enter the United States. However, immigration was extremely limited at the time. Alerted to their cause, Fast worked with Hiebert, who, with assistance from Kansas Congressman Homer Hoch, arranged a meeting with President Herbert Hoover. Hoover responded favorably, and those initial 300 immigrants entered the United States.

Fast died on 15 March 1949 in Reedley, California. Funeral services were held at Zion Krimmer Mennonite Brethren Church. Martin Fast and his wife Elisabeth, who died 8 September 1931, are buried in the church’s cemetery.

Through his writings, travels, and speeches, Fast played a significant role in establishing MCC in 1920 and the first Mennonite Relief Sale in 1922. In addition, he was known for his free-verse poetry, composed for friends and relatives, and read at birthdays, weddings, and funerals. The Mennonite Library & Archives, Fresno Pacific University, holds his archival papers.

Martin B. Fast, Krimmer Mennonite Brethren author and editor, was born 6 January 1858 at Tiegerweide, South Russia, the son of Peter and Aganetha (Barkmann) Fast. Here Martin attended elementary school. At 19 years of age he joined the Mennonite Church at Rückenau. With his parents he came to America in 1877 and settled near Jansen, Jefferson County, Nebraska, where he was converted, baptized, and received into the fellowship of the Krimmer Mennonite Brethren Church, 23 May 1880. He married Elizabeth Thiessen of Jansen on 24 February 1884. In 1887 he became a United States citizen. He served as editor of Die Mennonitische Rundschau, Elkhart, Indiana (later Scottdale, Pennsylvania), 1903-1910, and as the first editor of Der Wahrheitsfreund, Chicago, Illinois, 1915-1917. In 1908 he made a trip to Russia, visiting relatives and friends in the Molotschna settlement and elsewhere. In June 1919 he made a trip to Siberia with clothing and money for the relief of the poor, and later sent many food drafts for Russian relief. In 1929-1933 he served the Krimmer Mennonite Brethren Conference as chairman of the Board of Foreign Missions; and for some time he was secretary of the Mennonite Aid on the west coast. He died 15 March 1949 at Reedley, California, following a brief illness, at the age of 91 years, and was buried in the Zion Krimmer Mennonite Brethren cemetery, Dinuba, California.