The Mennonite Central Committee in its relief program during World War II cooperated with the UNRRA in Egypt, furnishing workers and relief supplies for the refugee camps in that area. In 1945 three of these Mennonite Central Committee workers were transferred by UNRRA to Ethiopia. During the next few years other workers were sent into this field, and a relief program was operated by the Mennonite Relief Committee (Elkhart). Finally in 1948 the emperor of Ethiopia gave the Mennonites consent to begin mission activity in his country, after which the Eastern Mennonite Board of Missions and Charities opened work 250 miles southeast of Addis Ababa.

By 1990, there were Mennonite or Brethren in Christ churches in the African nations of Angola, Burkina Faso, the Democratic Republic of Congo, Ethiopia, Ghana, Kenya, Malawi, Nigeria, South Africa, Tanzania, Zambia and Zimbabwe, with a total membership of 322,708. Of these, the largest numbers of members were in Congo (175,837), Ethiopia (57,011), Tanzania (32,100) and Zimbabwe (20,606). -- Melvin Gingerich 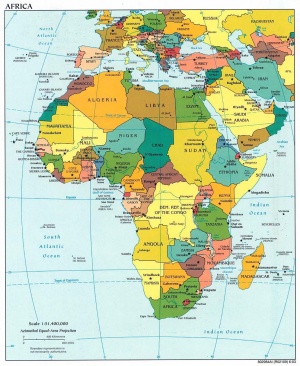 In 1890 Eusebius Hershey of the Mennonite Brethren in Christ Church ([United] Missionary Church) went to Liberia on his own to engage in missionary work. He soon sickened and died there, but his example prompted others from his church to volunteer. In 1920 the Mennonite Brethren in Christ organized the United Missionary Society and subsequently took charge of the missionary endeavor of its personnel in West Africa, notably in Nigeria.