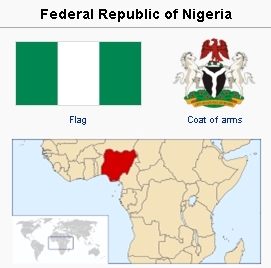 The Federal Republic of Nigeria is located in West Africa and is bordered by the Republic of Benin in the west, Chad and Cameroon in the east, Niger in the north, and the Gulf of Guinea on the Atlantic Ocean in the south. Nigeria's total area is 923,768 km2 (356,667 sq mi), and the 2010 estimated population was 152,217,341.

In Nigeria's early history, Hausa kingdoms and the Kanem-Bornu Empire prospered as trade posts between North and West Africa. The Yoruba kingdoms of Ife and Oyo in southwestern Nigeria became prominent in the 12th and 14th century respectively. The Kingdom of Nri of the Igbo people started in the 10th century until it lost its sovereignty to the British in 1911. It is the oldest kingdom in Nigeria.

On 1 January 1901, Nigeria became a British protectorate. In 1914, the Niger area was formally united as the Colony and Protectorate of Nigeria. Following World War II, Nigeria gradually moved toward self-government, and on 1 October 1960, Nigeria gained its independence.

Nigeria has more than 250 ethnic groups, with varying languages and customs, creating a country of rich ethnic diversity. The largest ethnic groups are the Fulani/Hausa, Yoruba, Igbo, accounting for 68% of population, while the Edo, Ijaw, Kanuri, Ibibio, Ebira Nupe and Tiv comprise 27%; other minorities make up the remaining 7%.

In 2009, 50.4% of Nigeria's population were Muslims, 48.2% were Christian (15% Protestant, 13.7% Catholic, and 19.6% other Christian), and followers of other religions were 1.4%. The core north is largely Muslim, there are large numbers of both Muslims and Christians in the Middle Belt. In the west of the country, especially in the Yorubaland, the population is said to be evenly divided between Muslims and Christians, while in the southeastern regions are predominantly Christians with widespread traditional beliefs. 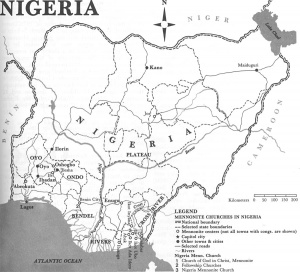 When the Biafran war erupted in 1967, all North American Mennonite personnel were forced to leave the country. Institutions gradually disintegrated and disagreement split the Mennonite church.

After the war ended in 1970, MCC carried out relief work in the East Central State. In addition, they worked with Save the Children Fund. Three Pax volunteers worked with the Christian Council of Nigeria, the Faith and Farm program of the Church of Christ in Nigeria, and Sudan United Mission. As the relief needs declined they began a comprehensive rural health program.

In 1975 the goals of the MCC program were to (a) be a Christian witness in an over-missioned country; (b) provide quality education by supplying adequately trained teachers who are Christian; (c) supplement the teaching force of Nigeria in areas where insufficient numbers of Nigerian teachers were available; (d) assist agricultural and community development programs under Nigerian and long-term mission leadership; (e) provide an opportunity for cultural exchange within a Christian framework. After a program of universal primary education was achieved by the Nigerian government in 1975, MCC decided to strengthen its program because of the great need for teachers. A board of Nigerians was appointed to consult with MCC on its future directions in Nigeria.

Stanley and Delores Friesen, Mennonite Board of Missions, worked in the "Islam in Africa Project" in Ibadan, 1969-70, and Mennonite Brethren Board of Missions and Services had placed workers with the Sudan Interior Mission in Nigeria during this time period.

By 1980 MCC work had shifted to the Muslim area of the North with Jos as the headquarters. Greater emphasis was put on learning the languages of the area so as to become more deeply involved with local churches and communities. In 1986 the number of personnel had dropped to 13, because of fewer applicants, and also because of the shift from a mainly educational program to a rural community work program. Eleven years after first applying, MCC was registered in 1987 as an official organization with the Nigerian Federal Government.

Mennonite mission personnel were instrumental in helping heal the rift between the church factions and participated in the reunification process in the mid-1990s. In 2003 the Nigeria Mennonite Church Bible School started classes. The curriculum included an overview of biblical books and in-depth studies of the Gospels and Revelation; courses on Anabaptist theology, evangelism and mission, and training in practical leadership skills. The first group of church leaders graduated from the school in April 2005.

Between 1978 and 2020 the following Anabaptist denominations operated in Nigeria.