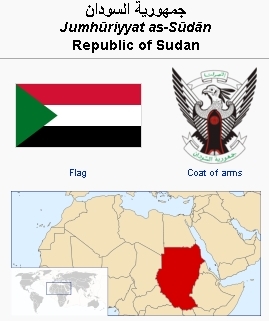 Sudan is a country in northeastern Africa. It is the largest in the African continent and the Arab World, and tenth largest in the world by area. It is bordered by Egypt to the north, the Red Sea to the northeast, Eritrea and Ethiopia to the east, Kenya and Uganda to the southeast, Democratic Republic of the Congo and the Central African Republic to the southwest, Chad to the west and Libya to the northwest. The Nile River, which flows from the south to the north, has secured Sudan's place in world history.

Sudan has 597 tribes that speak over 400 different languages dialects, but there are two distinct major cultures. In the north, the culture is Arabic with Nubian roots, the religion is Islam, and the landscape is mostly desert. In the south, the culture is African, consisting of hundreds of ethnic and tribal divisions and language groups, the religions are animist and Christian, and the landscape is savannah (subtropical grasslands). The north and south are separated by a large swamp called the Sudd, from which Sudan gets its name.

Since independence in 1956, Sudan has suffered from two civil wars, a number of military coups d'etat, large-scale drought and famine, as well as political and economic instability. As a result, Sudan is one of the world's poorest and unstable countries. Southern Sudan, where most of the country's Christians live, is widely acknowledged to have one of the worst health situations in the world.

70% of the population adheres to Islam, with the remainder of the population following either animist and indigenous beliefs (25%), and Christianity (5%). Sudan's largest Christian denominations are the following: the Roman Catholic Church, the Episcopal Church of the Sudan, the Presbyterian Church in the Sudan, and the Coptic Orthodox Church.

Mennonites first began their work in Sudan in 1972. Mennonite Central Committee (MCC) has worked in areas such as education, relief, community development, water and peace. The work of Mennonites in Sudan has been a fully seconded one, with all workers supervised not by their "primary" agencies (Mennonite) but rather by "secondary" agencies, in this case the Sudan Council of Churches or ACROSS, an externally based consortium of evangelical development agencies. MCC has provided personnel, training, funding, food and material resources. In southern Sudan, a region worn by years of civil war and neglect, MCC has helped communities rebuild. MCC has helped to build classrooms and wells and to purchase supplies for medical clinics. In Darfur, where a separate conflict began in the mid-1980s and reached a peak in 2003, MCC has provided aid such as cooking utensils and blankets to some of the millions of displaced refugees.