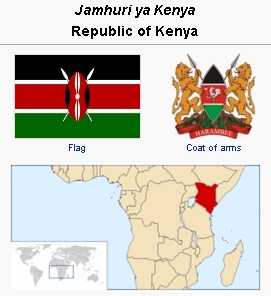 Kenya is situated in the eastern part of Africa. It borders the Indian Ocean in the east, Somalia in the northeast, Ethiopia in the north, Sudan in the northwest, Uganda and Lake Victoria in the west, and Tanzania in the south. It has a land area of 580,367 km2 (224,080 sq mi). The official language is Kiswahili, but English is the medium of instruction in schools.

For many years, Kenya was a British colony. It became an independent state on 1 June 1963, and on 12 December 1964 became a republic. By 2016, Kenya had had four presidents with Jomo Kenyatta as the first.

During the colonial period the Kenya Colony, the Uganda Protectorate, and the Tanganyika Territory enjoyed inter-territorial cooperation through the East African High Commission (EAHC) which provided a customs union and a common external tariff, currency and postage. It also dealt with common services in transport and communications, research, and education. This made it very easy for citizens to cross borders and to look for work or schooling.

In the early 1960s, when the colonies became independent, the integrated activities were reconstructed under the East African Common Services Organisation (EACSO), and many thought it might lead to a political federation between the three territories. This new organization ran into difficulties due to the lack of joint planning and fiscal policy, separate political policies, and Kenya's dominant economic position. In 1967, the EACSO was superseded by the East African Community (EAC) which aimed to strengthen the ties between the member States through a range of services to achieve balanced economic growth in the three nations.

The EAC collapsed after ten years for various reasons: disagreements with Ugandan dictator Idi Amin, the disparate economic systems (socialism in Tanzania and capitalism in Kenya), and the numbers of representatives from each country in decision-making organs. Each former member state had to launch, at great cost and lower efficiency, services and industries that the East African Community had provided previously.

By 30 November 1993, the three Presidents of the former member countries signed a Treaty for East African Co-operation and established a Tri-partite Commission for Co-operation. The process for integrating programs on all levels was begun, but it was not until 20 November 1999 that the treaty for re-establishing the East African Community was finally signed: it was ratified on 7 July 2000. A Customs Union came into effect on 1 January 2005. The Republics of Rwanda and Burundi joined the three original EAC members in 2007. A Common Market was established in 2010, and negotiations for the East African Monetary Union commenced in 2011. The EAC headquarters was located in Arusha, Tanzania.

In 2015 Kenya had a fast growing population of over 40 million from 42 language groups. Africans were the majority, but Asians, Arabs, Europeans, and other peoples are also citizens who have deep roots in the Kenya nation. Kenya has experienced enormous challenges; the colonial era was tumultuous and independence from the United Kingdom was acquired amidst violent insurgencies. Even after independence, there have been occasional political upheavals. However, in the midst of these enormous challenges, Kenya has enjoyed significant times of peace and tranquility. Kenya's generous hospitality has opened doors for refugees from Uganda, Somalia, Sudan, Rwanda and Ethiopia.

Kenya has been predominantly an agricultural land which relied heavily on coffee, tea, tobacco, and other agricultural products for export earnings. Kenya has excellent wheat, maize, rice, timber, and cattle lands. Tourism is a major booster of the Kenyan economy. Kenyans are a generous, enterprising people.

In 2020 the following Anabaptist denominations were active in Kenya: 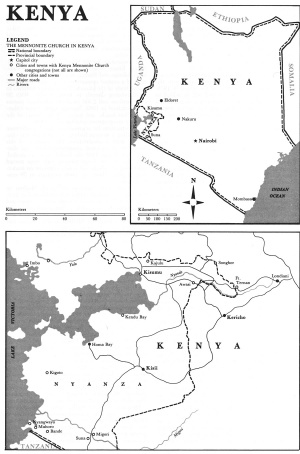 The Republic of Kenya lies astride the equator in eastern Africa and is bounded by Uganda to the west, Tanzania to the south, the Indian Ocean and Somalia to the east, and Ethiopia and Sudan to the north. The name is derived from the Gikuyu word for Mt. Kenya (Kere-Nyaga). Much of the north and eastern part of the country is semiarid. Most of the country's 16 million people live on the southwestern highlands (3,700-10,000 ft. [1,100-3,000 m.] altitude) with ideal temperatures and rainfall. The Great Rift Valley pierces Kenya from north to south, west of the capital Nairobi.

In the mid-19th century the British entered East Africa to protect their shipping routes to India. A railroad was built from Mombasa to Lake Victoria to create a link with Uganda, over which they had claimed a protectorate. Nairobi, begun as a railroad supply station, soon became the capital of Kenya. The British government then encouraged settlers to farm the highlands in the area north and west of Nairobi. The Gikuyu were forced onto reservations.

The Gikuyu resented this taking of their land, so they organized politically to better their situation. After World War II, a secret society known as the Mau Mau was formed. Its members pledged to reduce the influence and presence of the Europeans. Violence in the early 1950s led to the declaration of a state of emergency. The Mau Mau leader Jomo Kenyatta was arrested and sent into detention to the barren northwest. In 1963 the British granted Kenya its independence with Kenyatta as president. He made the Swahili word Harambee (pull together) a national slogan. He was succeeded in 1978 by Daniel arap Moi.

When the Mennonite Church entered Kenya, Nairobi became the center for Mennonite Central Committee (MCC) and Eastern Mennonite Board of Missions and Charities programs. The Mennonite Guesthouse established in the 1960s provided a valuable service to missionaries of all denominations who come to Nairobi for business and rest. Rosslyn Academy was founded in 1967 to serve the elementary education needs of missionary children in Tanzania and Somalia. The Baptist mission joined with the Mennonites in the operation of the school in 1976. Beginning in 1988 a high school was added to further its ministry. MCC involvement began with a Teacher's Abroad Program and has moved toward development work in the drier areas of the country, particularly among several nomadic tribes.